Orchids in the Orchard

One of the reasons I walk the orchard every few days is because I am always on the lookout for new native colonists, now the area is not subjected to periodic bursts of Roundup, and I think slightly less frequent mowing. I have been particularly hoping some of the native orchid species will establish themselves. Orchids are very sensitive to herbicides and disturbance, so I was curious as to how long it would take them to appear. 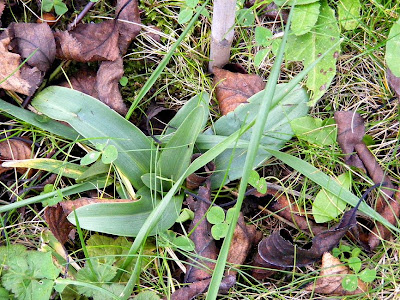 I was fairly sure Lizard Orchid / Himantoglossum hircinum / Orchis Bouc would be the first to arrive, and I am delighted to announce that on 20 November 2009 I discovered 6 rosettes of emerging Lizard Orchid leaves, most of them growing near the cherry trees. No one who lives in Preuilly-sur-Claise will be very surprised by this news. Lizard Orchids may be rare in the UK, but they are almost considered a lawn weed in Preuilly, which for some reason is a Lizard Orchid hotspot, even for the Touraine, where this species is common.

A small colony of Lizard Orchids,
each plant marked by a cane 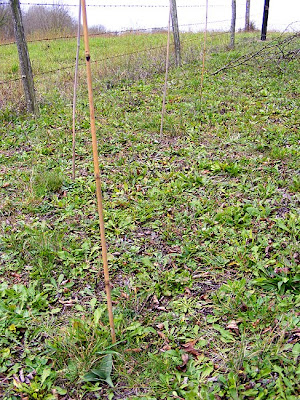 I have staked the young plants so they will not get accidentally trodden on or mowed off. Alex, who mows our orchard three times a year, may find the canes rather a nuisance, but it can't be helped. The Lizard Orchids will grow to about 45cm high and flower in early summer. After that they will set seed and disappear, so they can be safely mowed over in autumn.

The neighbouring farmer was out spraying the fields to the west and north of the orchard, and the day was quite breezy, but fortunately the wind was coming from the south-east, so we escaped the drift.

A rosette of plantain leaves, not orchids. 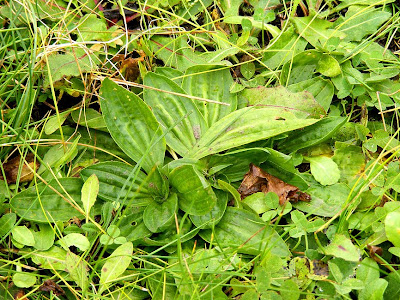 Can you tell which is orchid and which is plantain? 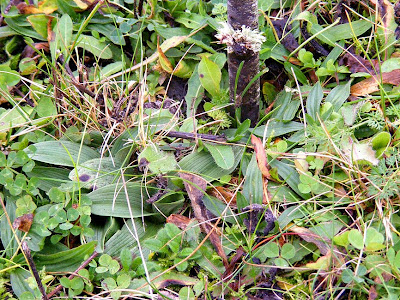 A few days later, I realised that these half dozen rosettes were only the tip of the iceberg. At last count we have over 60 Lizard Orchids emerging in the orchard. The main colony is near the Walnut trees. The prevailing wind here seems to be from the east or south-east, and I think this is significant. Orchid seed is microscopic, and windborne, and this would be the first area of the orchard such seed would encounter.

A forest of canes and cherry twigs marking orchid plants. 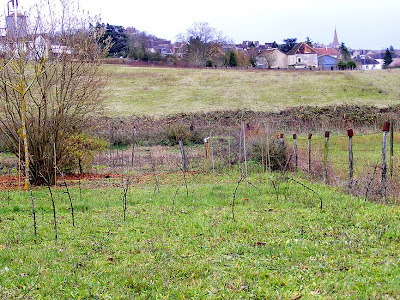 They are not easy to spot in the melange of plants that overwinter as rosettes in rough short grass. The only way to do it is to walk the entire orchard with your eyes fixed on the ground about a metre in front of your feet. Several times I stepped back from marking a plant with a cane to find that I had been standing on one of its brothers.

I believe this is some sort of hint. It is someone's special day today and it's a biggie. As we have so many orchids in the verger, that person won't need any orchids from the shop, will they.
Simon
Posted by Susan at 09:00

Happy Birthday Susan !!
Hope you are having a wonderful day and enjoying all the "special" bits.
Orchids in the orchard, what a lovely find.
Hi Simon, how is the great clothes line hunt coming along ?

Bon Anniversaire Susan :-)
Orchids and Saffron - what a lucky girl!

Happy birthday! It sounds like a round-numbered one, one of life's milestones.

Happy birthday Susan. And many, many happy returns of the day.

I envy your orchids, even though we have plantains down here.

So jealous of your lizard orchids. We have a lawn/meadow here in Surrey (UK) where we have established many British species, but lizard has eluded us.

Any chance of a swap of military orchid seed for some lizard?