Some more photos from the Téléthon rally:

When I first announced to Susan I though we needed to buy a Traction Avant, she took some convincing. In fact, it almost didn't happen - for ages she told everyone we spoke to about it that we were thinking of buying a Trabant, and was met with raised eyebrows and a sympathetic look.
A Trabant. 600cc of raw 2-stroke power and
doors made out of recycled cotton waste 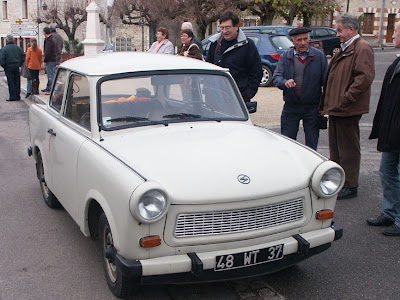 Now we have our own classique we have met many people who own old cars and love them as they are - cars, not museum pieces. They laugh about things that fall off, indicators that indicate but only in one direction if you're lucky, wipers that wipe when they feel like it, seat pads replaced with granny's old cushion...

Accessorize to stand out in a crowd. 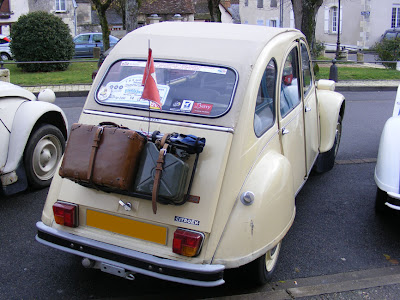 We are pleased that there is comparatively little lifting of bonnets and talk of grommets. (At least, I think there is little talk of grommets. Does anyone know the French for grommet?) We have been asked to lift the bonnet a couple of times because people are interested in our new alternator, but apart from that it seems to be more about enjoying driving the cars and having a laugh.

Célestine amongst her smaller cousins 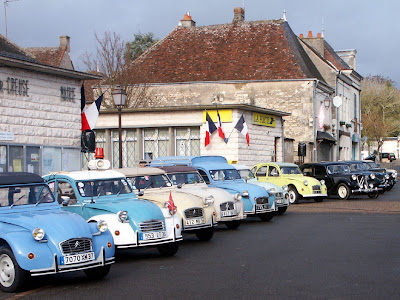 There are some great, cheap old cars out there. The Trabant looks fun (and goes like a rocket when tuned properly) and some of the Peugeots are interesting cars (I particularly like the Peugeot 202 with its hidden headlights). I won't be buying another classic for a while - but I have to admit: the thought is always there! Maybe we will replace our Renault with a Peugeot 404: classic, cheap, bullet-proof, and reliable enough to use as an everyday car. Don't tell Susan I said so, though.

A grommet is a metal eyelet — un œillet.

I'm just going to keep my Peugeot 206 until it becomes a classic. If I live that long.

From http://www.thefreedictionary.com/ :
grommet [ˈgrɒmɪt], grummet n
"(Engineering / Mechanical Engineering) a ring of rubber or plastic or a metal eyelet designed to line a hole to prevent a cable or pipe passed through it from chafing"
It also says:
[from obsolete French gourmette chain linking the ends of a bit, from gourmer bridle, of unknown origin]
which explains why it has that Anglicised French sound about it.

First time I ever heard the word was when my father's Austin 1800 stopped suddenly on our way to our annual holiday. The bloke from the NRMA (the local roadside service mob) said "ah yes - you have water in your grommet". Turned out the seal on the distributor cap was letting in water.

The phrase has entered our family vocabulary.