Two of Susan's friends from Australia have been in Paris the past week, and yesterday they hopped on the TGV to St Pierre des Corps where we met them with Célestine.

First stop was coffee - they were on the train that arrived at 9.00am, which meant we left home at 7.15 and were in need of picking up ourselves. We stopped at Veigné at a little bar-tabac (a combination newsagents, bar and betting shop) while Susan, Margaret and Di caught up on many years' news.

From there, we progressed (in a stately manner, naturally) to Le Louroux. I had a strange feeling, however, that all was not as stately as it could have been - a feeling reinforced upon arrival by Susan announcing "we have a flat tyre!". To be precise, the passenger's side front tyre was totally flat. 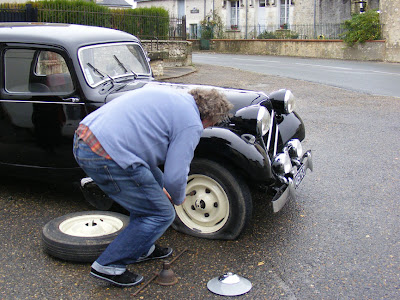 After playing around with the jack for a bit I sent the ladies off to look at the Maison du Pays and church while I did the mechanic thing. This wasn't easy, because although I had worked out where the jacking points at the back of the car are (can't miss 'em), at the front of the car - where everything goes on - things are more obscure. Still - I persevered and managed to get the wheel changed. The old tyre, however, is totally shredded. I hope the wheel isn't damaged.

From there we moved on (quite gingerly at first) to Ste Maure de Touraine, or more precisely Noyant de Touraine, where we dined at a Routier called the Milles Pattes (the Centipede) and for 12€ we were wined dined and sent on our way suitably bloated. This is an excellent restaurant, full of builders and military memorabilia near the railway line in Noyant, and well worth stopping for.

Our next stop was the basket weaving town of Villaines les Rochers. We called into the co-operative, where they have a shop full of baskets, furniture and knick-knacks, a small museum, and a workshop. The work they produce looks amazing (I'm not a huge fan of basketwork, but it really is good) and is all done from willow osiers, and the skill (and dexterity) of the artisans is really impressive. 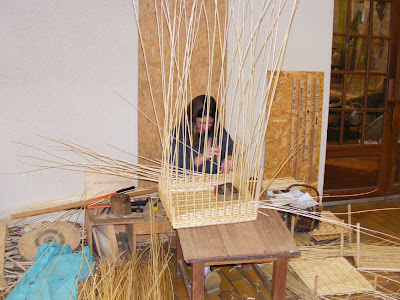 We had intended to visit the chateau at Azay le Rideau, but when we got there a notice on the door said the it was closed for the day as they were engaged in a 'mouvement social' and they hoped they had our understanding (in other words, they were on strike).

This gave us an opportunity to visit Villandry, which is always worth a stroll - especially when admission is only 2€ because the house was closed off and they had a film crew in. This year's theme in the garden appears to be cabbages, although I noticed they also had chard, black kale (and just to get away from a cabbagey theme) celery. It is truly amazing what you can do with a paddock full of cabbages, some box hedges, and a team of professional gardeners! 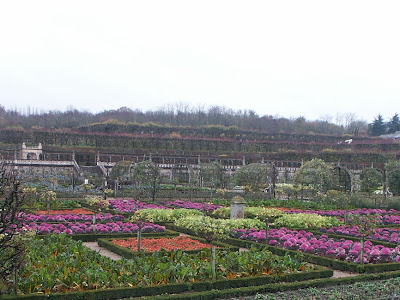 Despite the rain (which was cold AND wet) and wind we had a good day out, and Margaret and Di enjoyed feeling like royalty in the back of Célestine, but they did suggest we should supply elbow length white gloves and tiaras for a more authentic royal waving experience. 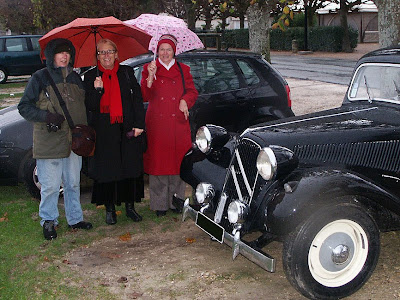 The drive home from St Pierre des Corps wasn't much fun: it was rush hour, the traffic was appalling and made worse by roadworks and poor signposting that was invisible in the teeming rain. Célestine doesn't like being in traffic jams with her headlights on - the battery doesn't charge when she is idling, so by the time we left the agglomeration of Tours I couldn't see the road. Happily, after 10 minutes or so on the open roads the headlights took effect and life became easier. We also had some windscreen wiper problems - the passenger side wiper travels too far and gets stuck on the windscreen frame, which means Susan has to operate the wipers manually for me.

Still - little problems - you can get a flat tyre in any car, and with some of the rain we had yesterday anone's wipers would struggle. It was good getting away from the garden works for a day, and it looks like we're not gardening again today as the weather hasn't improved any. I will be tucked up in front of a roaring fire watching DVDs.

Email ThisBlogThis!Share to TwitterShare to FacebookShare to Pinterest
Labels: Food and Drink, Gardens and Parks, Pictures of Chateaux, The Car and Driving, Towns and Villages near Preuilly

Simon,
Memories of driving a Traction come flooding back from your blog today. Windscreen wipers, yes bloody useless!!!!
I once limped home after the first gear cog lost a few teeth but pulled the box apart, replaced the cog and was back on the road the following weekend. Try that with a modern car.
Need to try that workers cafe in your blog on our trip next April.
Our best meals were where the blokes in their hi visibility safety clothes ate.

I RainX'd today, so useless windscreen wipers are a thing of the past!

Is first gear losing a few cogs any great loss? I still haven't really got the hang of first - It only gets used at stop signs :)

LOL. Tractions always had great torque.
I might do my blog this weekend on the cars I have owned. I'm inspired.
Leon

I'm looking forwards to that blog! I saw a Panhard for sale the otehr day, and that got me wondering....