The last two days have been Téléthon, the annual fundraiser for research into Muscular Dystrophy. It is a big event, this year having raised over 80 million euros by the time we went to bed last night. We played our own little part yesterday.

Our neighbour Patrice called in a couple of weeks ago to ask if we would be interested in joining a randonnée pour voitures anciennes. He owns three old Peugeots and had organised a group of cars to go around the small villages surrounding Preuilly, collecting funds. Needless to say we jumped at the invitation.

We met at Yzeures sur Creuse at midday, and enjoyed a convivial lunch with the drivers of the other vehicles. We had all purchased clockwork models of 2CVs, which were being sold as fundraisers by Fiesta'Deuche Berry-Touraine (the local 2CV club), which kept us fairly busy between courses and added to the hilarity. After lunch, tactics were discussed and official paperwork handed out. The 2CVs were to head off in one direction, and the rest of us, lead by Patrice's friend Jean-Louis, were to go to Chambon, Chaumussay, Charnizay and back to Yzeures. As the purpose of the exercise was to attract attention, continual use of the horn was obligatory. I probably used the klaxons more yesterday than I have ever used car horns before in my life. Excellent fun!

At Chambon we stopped for our after lunch café at the Mairie, which was a pleasant surprise. The cars attracted a lot of attention: there was a crowd of at least 10 people, quite a number for such a small village. At Chaumussay we called into the salle de fetes (the old station) where the local children were putting on a concert. I am not sure that our parting salvo of car horns helped much.
Careful parking at Chaumussay 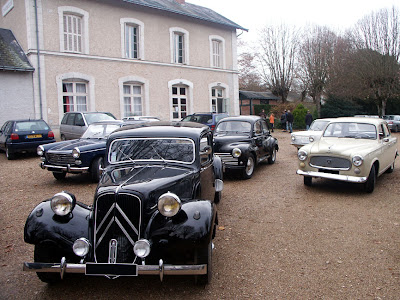 At Charnizay we parked in the village centre, before moving off to the football ground where the local team were taking on St Hippolyte. We were invited to join the supporters in the bar, where Susan was offered a cup (a CUP mind you) of Poire Williams which she managed to gracefully decline, opting for chocolat chaud instead. The football wasn't up to much, but we did see some brutal tackles - something that always brightens a cold and overcast day.

A collection of tails at Charnizay 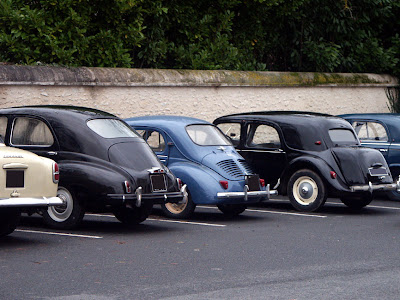 After Charnizay we got separated from the main group. Being the third car in line, I thought we were safe from getting lost. Unfortunately the first two cars went in the wrong direction, and we followed. Happily, we knew where we were supposed to be going (Yzeures) so we had our own private randonnée, meeting the rest of the team back at base.

We really enjoyed the afternoon's drive - everyone was very welcoming. Célestine attracted a lot of attention and has been declared a belle voiture by more than one expert. I may be biased, but I reckon she was the prettiest car there too.

We stayed on for the dinner of poule au pot, where it was announced that the classic cars had collected over 450€ between them.

I just love all those old rear aspects !!