The Salamander and the Ermine

Salamanders and ermine are heraldic emblems you will often encounter in the Loire.

Salamanders have a similar symbolic meaning to the phoenix, that is to say, they emerge miraculously unscathed from the fire. It is believed that salamanders acquired this reputation because people would observe them scurrying from fireplaces. The truth is the poor creatures had probably been sheltering in the cool damp conditions of the log pile and only emerged when forced to by the flames. François I made the salamander motif his own by displaying it frequently and prominently, but in fact, it was already an established Valois family emblem.

The salamander and the ermine
– emblems of François I and Claude de France –
here depicted on a fountain in Azay-le-Rideau. 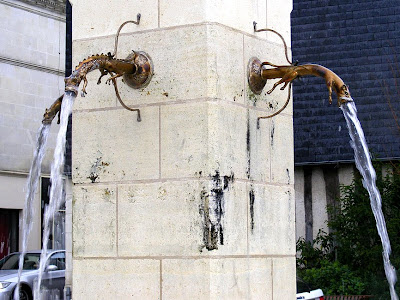 His queen, poor Claude, who was eclipsed all her life by more glamorous women at court, is today remembered not so much because of the many sleek and sinuous ermine her husband had carved to keep his salamanders company. Instead, she is the inspiration for the name of a popular and delicious type of plum, known as a Reine Claude in France, or greengage in Britain. Ermine, by the way, is a stoat in its winter coat, which because of its white colour, came to symbolise purity.

The ermine is also associated with Claude's mother, duchess Anne of Brittany, queen of France. In fact, it figures prominently in the coat of arms of the Dukes of Brittany, and of the nation Brittany.

For Brittany, it was the equivalent of the "fleur de lis" for France.