Pavlova (pronounced pav-LOH-vuh) is not French, it's one of the glories of Australian cuisine (and if you are a New Zealander, talk to the hand...)

A pavlova is a large disk of meringue, crispy on the outside and marshmallowy on the inside. It is absolutely nothing like the dry, chalky meringue shells that one can buy in the supermarket. Dolloped on top is whipped cream, and the whole is decorated with fruit. Strawberries are very traditional, but raspberries, banana, mango and kiwi fruit*, and various combinations of these, are probably just as popular. The one fruit which is more or less essential on top of a pav is passionfruit. 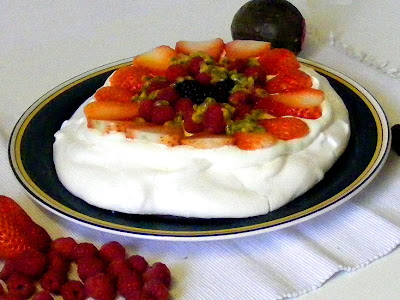 A pavlova is one of the few dishes that combines pieces of fruit (as opposed to purée) and cream in a way that enhances the fruit rather than masks it. Perhaps the influence of the sweet crunchy/spongey meringue is the secret.

The meringue base before it goes into the oven. 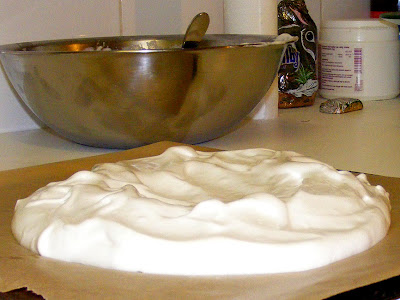 It is important that a pavlova is cooked in such a way that the meringue barely colours. The merest hint of off-whiteness is acceptable but anything more is shameful failure.

The meringue base after it has come out of the oven. 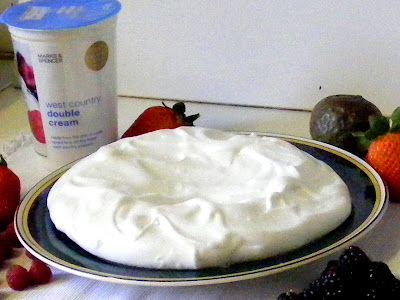 *Please note: it is kiwi fruit. Kiwis (on their own, without the fruit) are either a family of flightless birds endemic to New Zealand, and one of that country's national symbols (link to the cult video cartoon Kiwi! on YouTube); or the generic nickname by which people born and bred in New Zealand are known.
Posted by Susan at 09:00

Susan,
Love the Kiwi thing - so cute.
Your readers might like to know that the Pav was named after the Russian Ballerina Anna Pavlova after visiting Oz and Kiwi Land during the 20s I think.
Yours looks superb.
Leon