For me, many of the highlights of 2008 occured in July. Tour de France day, Bastille Day and moving the bath all occurred in a 10 day period, and I imagine that at least two of these events will remain with me as long as I have memories.
Adrian contemplating the task at hand 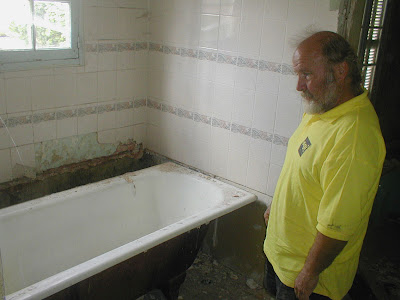 Another highlight was being able to spend so much time in our house. With a few exceptions I was in Preuilly from April to October this year, which allowed me plenty of time for thinking and then doing stuff. All that thinking time and practice obviously paid off, because I am getting better at doing the doing. Getting the car registered and completely legal was pretty good too. 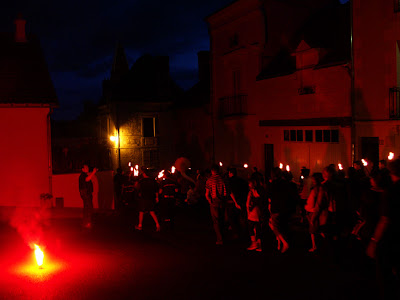 But as usual, the people we met and the visitors we had during the year were the real highlights. Most of them we met through this blog - and those we didn't meet through the blog had certainly heard of it. To those who invited us for drinks and/or meals (or even transported me to the optometrists when I broke my glasses) and made us feel so welcome in France, a million thanks.

For me the highlights were having my parents over to visit as well as our first real guests. We met lots of new people: Roger Lezeau (and a mention in les Cahiers de la Poterne); more fellow Loire Valley bloggers Ken and Walt, and their friend CHM; my entomology online forum buddies Pierre, and Edith and her wonderfully hospitable Gascon husband Christian.

I was thrilled that we were contacted by Mike and Cally Vaile and that we were able to help rehome their watercolours of Preuilly by mid-19th century artist John Louis Petit. 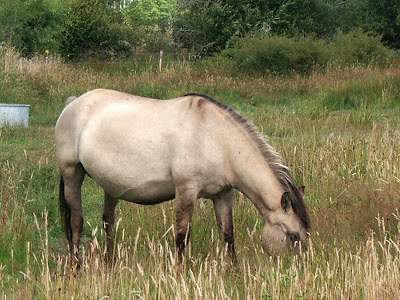 I fell in love with the little herd of Konik Polskis (Polish Ponies) at la Réserve naturelle de la Chérine, who took a strong interest in my project there surveying the species of diptera (flies) on the reserve. They were not always helpful though, as my bag of equipment held a fascination for them, and one did eventually manage to chew a hole in it while I wasn't looking.

An Early Spider Orchid (taken by my mum) 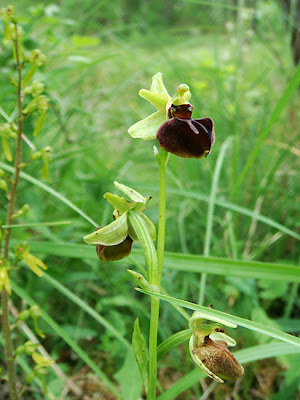 Another ongoing highlight throughout the summer was the many orchid species we saw and I look forward to repeating the experience next year.

What were your favourite posts from the blog in 2008? We'd love to know what you particularly enjoyed.
Posted by Simon at 10:00

Hi Susan & Simon,
Happy New Year to you.
All the 2008 posts were from very to extremely interesting each in their own right. So what can I say? Keep up the good work in 2009.
Cheers!

Chm speaks for me too. I enjoy your wide range of interests. The cooking and nature entries are always intriguing. If I had to choose, I'd call the adventure of the bath the most riveting.