Malvoisine is the name of a very small hamlet just outside Preuilly. The Chateau de Malvoisine was built in 1909 on land which had been cultivated since the middle ages, but interestingly appears never to have had a chateau until this late date. The house has now taken the name of the area as its own. 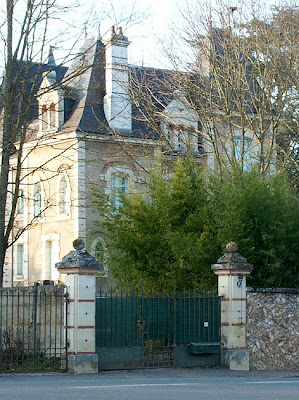 The word "malvoisine" is an interesting one. I am sure we are not the only people to have wondered why you would blatantly (nay, proudly) advertise yourself as "the bad neighbour", but this could be yet another a dastardly linguistic trick; Malvasia is a grape variety grown around the Mediterranean region and Malvoisie is the Old (medieval) French for both the grape and the wine made from it - known in English as Malmsey.

English readers - and lovers of Shakespeare everywhere - will instantly recognise the name Malmsey.

George Plantagenet, 1st Duke of Clarence, was the son of Richard Plantagenet, 3rd Duke of York, and brother of Edward IV and Richard III. The Plantagenet Dynasty started in Angers in 870 and became the Kings of England when Henry II ascended the throne in 1154. The line lasted almost unbroken (but a little bent) until Richard III was defeated at Bosworth in 1485. The current Monarch of England (Wales, Scotland, Northern Ireland, Australia, Canada, New Zealand, and 14 other countries) and her successors are distant descendants of the Plantagenet line. (If you want more on the Plantagenets, look here. It's complicated - don't say you weren't warned!)

Anyhow, back to Malmsey...

George Plantagenet, 1st Duke of Clarence (remember him?) is traditionally said to have been executed for treason (he plotted against his brother Edward IV) by being drowned in a butt of Malmsey Wine*. This is also the story Shakespeare used in the play Richard III, but it is possible that it originated as a wry comment on the fact that George Plantagenet was pretty useful with a wine glass. Another theory is that George's body was transported to Tewkesbury Abbey for burial from the Tower of London (the scene of the execution) in a barrel of wine, much in the same way Nelson's body was returned to England from Trafalgar in a cask of brandy.

Then again, the Malvoisine could just have been bad neighbours...

*The story was first reported by Dominic Mancini in his book De Occupatione Regni Anglie per Riccardum Tercium (The Occupation of the Throne of England by Richard III).
Posted by Simon at 10:00