The Bridge at la Guerche

Not the current bridge over the Creuse built in the 1970's (from which most photos of the Chateau are taken), but the previous bridge at la Guerche.

There is a piece of stone in the car park of the Mairie in la Guerche with an interesting story... 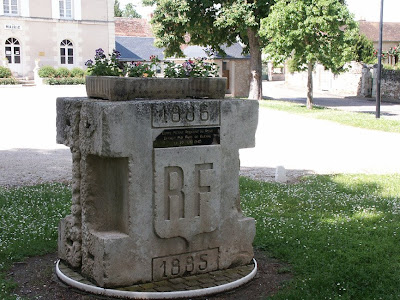 In May 1940 France was invaded by the Germans (for the 3rd time in 70 years*) and for the French, things weren't going well. The French Government fled Paris, and took the gold reserve of the Bank of France with them to prevent it falling into enemy hands. It was moved by convoy - first to Tours, and then after the German army crossed the Loire, to Poitiers and then Bordeaux. All this was done with the Germans in hot pursuit.

To delay their pursuers the French destroyed the bridges of Descartes, Leugny, la Guerche and Lésigny. I had assumed from what I have been told that the convoy actually travelled through la Guerche, but now I am not so sure. What we do know for sure is that the bridge was destroyed at 7.15 on the 22nd June 1940. Eleven hours later (in the same railway carriage in which the 1918 Armistice was signed) an armistice was signed between representatives of the Third Reich and the French government of Maréchal Pétain. 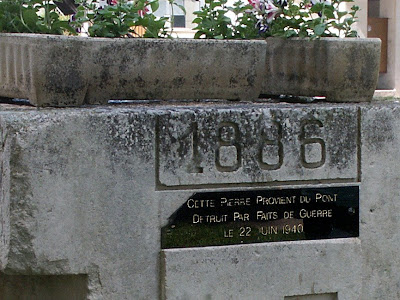 Coincidentally (or maybe not coincidentally) part of the border between what became known as Vichy France and the Occupied Region was the Creuse river, with La Guerche in the nominally French zone, and Poitiers and Bordeaux in the Occupied zone (map here). Even though the bridge was no longer there, la Guerche became an important point for smuggling people and goods across the border.

In the 30 odd years between the destruction of this bridge and the current bridge being built, crossing the Creuse at la Guerche meant either fording the river (it is only about 60cm, or 2' deep during summer) or using a boat. I imagine that neither method was truly comfortable during winter, and the populations of the pretty little villages that lie at each end of the bridge were mighty pleased when the new bridge was finished.

*It is interesting to note that it is almost 70 years since Germany last invaded France. The Common Market appears to be fulfilling its primary aim.

p.s. Tomorrow (Saturday) my house in Queensland is being auctioned. Fingers crossed everybody!
Posted by Simon at 10:00

Have had my fingers crossed for about a week now, since Susan told me about the auction!

And, yes, the Common Market and Europe are working fine. Let's also keep our fingers crossed!

Hi Simon & Susan,
Hubby & I went through La Guerche in November but did not see that marker !
I think that there are some interesting old homes in the area.
We went through La petite guerche & the area behind the château.

I'm more than sure that you know the marker in Descartes delimiting unoccupied France.Such a sad reminder of darker days in Touraine.

Barbara: sad to relate, Descartes is somewhere we drive through very rarely, and stop in even less often! I haven't seen the marker, but I have seen the plaque on the bridge about it being destroyed.

Leaving Descartes south on the D750 towards La Guerche, there is a demarcation line across the road just before the turning to Le Grand Pressigny. A sign explains its significance but blink and you might miss it...

Jon You mean this
one?