This is the notorious aphrodisiac Spanish Fly, actually a beautiful metallic emerald blister beetle and not a fly at all. Spanish Fly belong to the Oil Beetle family, Meloidae, and are related to the Violet Oil Beetle that I wrote about a few months ago in Big Black Beautiful Beetles. The scientific name is Lytta vesicatoria and in French it is la mouche d'espagne. 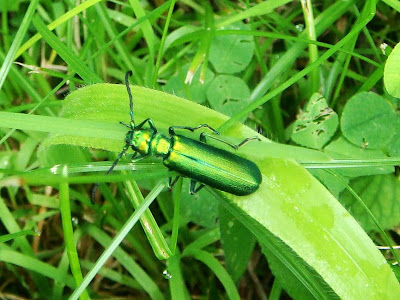 Like all oil and blister beetles, it contains a highly irritant poison called cantharidin, which can be extracted from the beetles by simply grinding them up. The ingestion of minute quantities of cantharidin causes priapism, hence its reputation as an aphrodisiac. Unfortunately, ever so slightly more than minute quantities cause permanent kidney damage or death. Today, products marketed as 'Spanish Fly' are either banned, or contain another irritant such as the relatively harmless cayenne pepper, which does not induce the immediate and pronounced blisters that contact with cantharidin would. (If you come across a beetle like this, don't touch it! This one was photographed by my mother in the grounds of the Château de la Celle Guenand in June.)

The Moroccan spice mix ras el hanout, which is very popular in France, once sometimes contained Spanish Fly along with the somewhat tastier cardamom, cloves, cinnamon, chilli, paprika, coriander, cumin, mace, nutmeg, pepper and turmeric. I make up my own ras el hanout, and I don't think it is any the worse for the lack of Spanish Fly. The spice mix has a great affinity with cauliflower, making it so delicious that even cauliphobes will eat with gusto.

Here is my recipe:

Mix together the following spices and store in a sealed jar Susan
Posted by Susan at 10:00

Email ThisBlogThis!Share to TwitterShare to FacebookShare to Pinterest
Labels: Food and Drink, Insects, nature and wildlife, Towns and Villages near Preuilly

Hi Susan,
Now I know how you use my favorite tea!

So now we know how the "fly" really looks like.
I have heard about this concoction more in literature . It's always nice to learn little bits of knowledge!

This is an "a propos" recipe. I was looking at some Moroccan recipes last night for over the holidays and the spice mix "ras el hanout" was mentioned. You have saved me the time from Google. A big "Thank You"

C-H – well, I can't drink the stuff :-), so when my Californian intern ran away to marry her Tunisian boyfriend and left me with her supply of Lapsang, I had to get creative or waste it (which of course was unthinkable).

Beav – je vous en prie :-) I use this spice mix a lot, substituting it in most recipes that call for curry powder or garam masala, or just to generally spice things up. I am beginning to think I probably use it too much as everything tastes of ras el hanout and I probably should give other combos a look-in. It is fab with lamb and chickpeas too.