Butterflies in the Southern Touraine, 2008

Although 2008 was an appalling year for butterflies, with numbers drastically down even from the quite poor year before, we still managed to add some new species for us for the area. The weather really conspired against butterflies this year, being wet and not terribly warm for much of the spring and summer.

Here is a selection of what we saw: 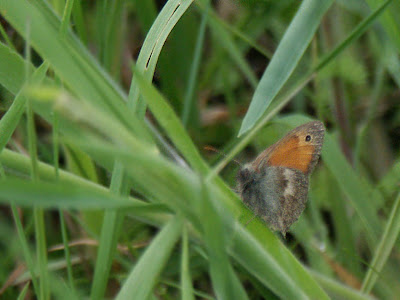 Small Heaths are absolutely everywhere all summer long in France wherever there is the unimproved grassland that their caterpillars require. Their scientific name is Coenonympha pamphilus and their French name is le Procris or le Fadet commun. As yet, their population is unaffected by modern changes to agricultural practices in France, but this is not the case in Britain, where they remain widespread, but subject to sudden local declines. 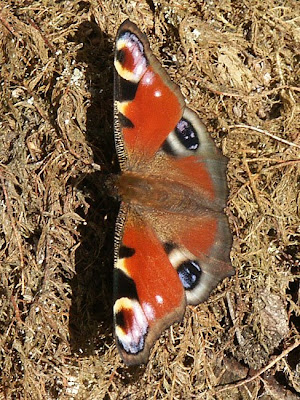 One of my field guides describes the Peacock Inachis io as 'a handsome and familiar butterfly'. It is widespread, common and thriving, and extending its range northward in Britain (although conversely rare around the Mediterranean). It is not picky about habitat, although likes to have handy nectar plants available for the adults, and the caterpillars feed on nettles. In French called le Paon-du-jour, not to be confused with le Paon-du-nuit, which is a moth. 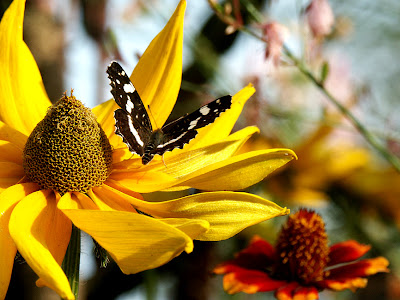 What a peculiar name for a butterfly, you might think, but the underside does look remarkably like a detailed map. The other peculiar thing about this butterfly is that it has two broods, one in spring and one in summer and they look so different you would assume they are different species. This one is the summer version, and is quite abundant in June along the riverbanks of central France – they like damp sunny woodland edges and linear territories, again with nettles for the caterpillars. The link to the underside mentioned above is to the other colouration, seen in the spring. The spring generation is less common. The Map Araschinia levana is called, surprise, surprise, la Carte géographique in French. This is a quite small butterfly (3-4cm across as compared to its most common lookalike in the area, the Southern White Admiral, which is 4.5-5.5cm from wingtip to wingtip), but very watchable and appealing.

What's an Essex Skipper doing in central France you ask? Well, in France Thymelicus lineola is called l'Hespérie du dactyle, and it is quite common in central France in open mixed grasslands. It is called the Essex Skipper because that is where it was first discovered, as recently as 1889, to be a separate species with a quite different lifecycle to the very, very similar looking Small Skipper, which also occurs quite commonly in the Touraine, Berry and most of the rest of France. It continues to thrive in Essex, and indeed is extending its range. How do I know this is an Essex Skipper? It has black tips to the antennae (Small Skippers have orange) and you will be amazed how easy that difference is to spot in the field once you know what to look for. 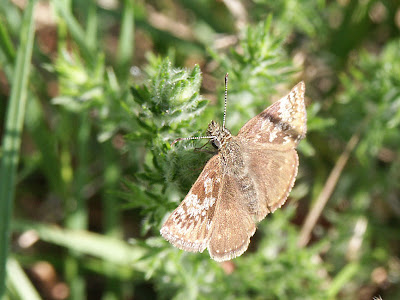 Oh dear...the English name for Erynnis tages is rather unflattering compared to the French le Point-de-Hongrie. Point de Hongrie is a style of chevron patterned parquetry flooring, very fashionable in France in the 19th century, and I think more likely to be the derivation of the name than the more colourful bargello embroidery also known as Hungarian Point/Point de Hongrie. The butterfly is exactly the colour of a richly patinated hardwood floor, and not easy to spot if sunning itself on a bare piece of earth. The species is quite abundant in most of France where there is dry flowery grassland, heathland, chalk downland, disused railway lines and quarries or waste ground with a mixture of taller vegetation and bare patches, but in serious decline in Britain due to habitat loss. Because of its dull colouration and habit of sitting with its wings folded down around its body, most people probably never even notice this butterfly, or if they do, think it is a moth. 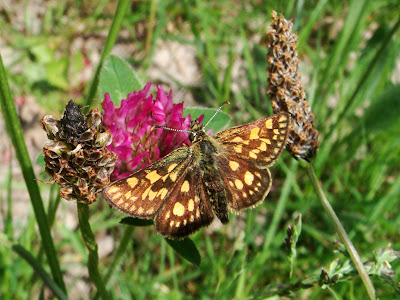 This Checkered Skipper Carterocephalus palaemon was photographed by my mother in the Fôret de Preuilly in late May (its peak flight period). In French they are called l'Hespérie du brome (brome being the type of grass the caterpillars eat) or l'Echiquier. In the past a widespread but localised species, they can be seen in damp forest clearings and the edges of peaty bogs in Indre et Loire, but throughout France are becoming increasingly scarce, and went extinct in England in 1976. One of my field guides says that that the only species you are likely to mistake the Chequered Skipper for is the Duke of Burgundy Hamearis lucina. Not very much chance of that in the Touraine and Berry. We arrived one day at the Maison de Nature in the Brenne, and the warden I was meeting rushed up, apologising that he was a little late, but there had been a Duke of Burgundy seen about half an hour earlier, only the second record ever for the Réserve de la Chérine. 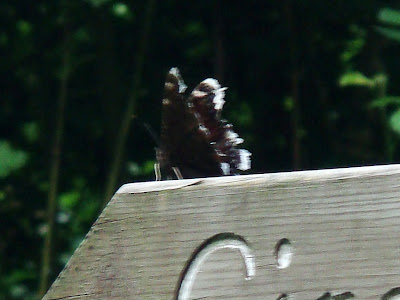 The Camberwell Beauty Nymphalis antiopa is le Morio in French. Even though my parents and I only got this brief and rather distant glimpse, the species is so distinctive as to be unmistakable – velvety chocolate brown with a broad cream border and a row of blue spots. My mother snapped this shot in the Fôret de Preuilly in late May. The distribution of this butterfly throughout France is rather patchy, and its numbers vary greatly from year to year. They are creatures of woods and woodland edges, and often migrate quite long distances, with a few making it to Britain every year, ending up rather tattered as this one is. The adult butterflies feed on the oozing sap of birch trees. 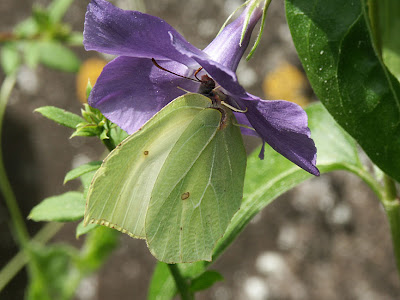 The Brimstone Gonepteryx rhamni (le Citron) is quite common throughout France and England, and appears in early spring through to late autumn. This female was photographed in Chanceaux près Loches in early May. The unusual outline and greeny-yellow colouring allows it to almost disappear in the spring foliage. They can be seen on the edges of forests, clearings and rides, open woodland, open grassland with or without trees and scrub. It is generally believed that this species is the original 'butter (coloured) fly'. 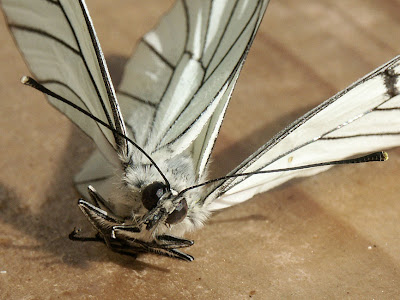 I found this one dead in early June in the garden of the gîte we stayed in with my parents in Roux, so we took the opportunity to photograph it. We did see a few in the long grass round the back of the gîte, but never managed to get a good photo. The simply but elegantly attired Black Veined White Aporia crataegi is called le Gazé or la Piéride de l'aubepine in French. This one is a male, as the white scales on the wings have good coverage – in females the scales are more patchy, often leaving areas translucent. The population of this species varies greatly from year to year. Although I saw more this year than last, that may be because we were on their migratory route this year for some reason, and not last year. They can be abundant, but are retreating against the tide of intensive agriculture, with its wholesale destruction of hedgerows to make bigger and bigger fields. Also, the caterpillars are particularly sensitive to herbicides. Numbers are down year on year in western and south-western France, and in the north they have virtually disappeared. They went extinct in England in the 1920s. They can be seen in hedges, rose bushes, wooded natural or improved grasslands and forest edges. 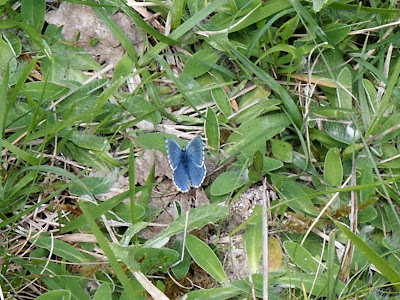 I wrote about the beautiful Adonis Blue last year, along with some of the other species we saw in 2007, but I thought I would include this one here anyway. It was photographed while we were orchid spotting at Chaumussay in late May.

The butterflies are as beautiful as the photos!