The Roman Ruins at Sanxay

When Susan's parents were with us in France we took a trip to the Vendee, near Niort. On the way, we visited the ruins of a Romano-Gallic town near Sanxay, southwest of Poitiers.

The big three attractions here are the amphitheatre, a huge bathhouse, and a temple. Like many big things photographing them doesn't do justice to just how enormous they are. 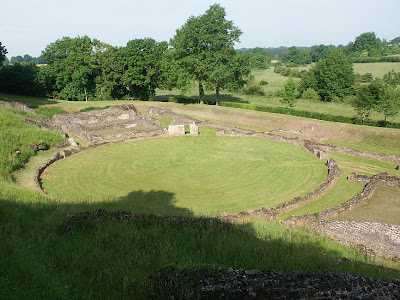 The amphitheatre used to seat 8,000 people: that's about the size of the Albert Hall in London and all the auditoriums in the Sydney Opera House - combined! It is built into the hillside, so unlike the Colosseum in Rome it has no towering outside walls - and it is round as opposed to elliptical. Another difference to the Colosseum is that it was buried in a field in France for over 1500 years, rather than being in the centre of a living city in Italy. Every year in August there is a music festival held in the amphitheatre, the highlight of this year's being a performance of Verdi's requiem. That one is going into the diary...

From the amphitheatre you follow a path beside the Vonne river, then cross a little bridge to the baths.

The bathhouse is enormous - and apparently even bigger once than what can be seen now. It has recently been roofed over, much in the style which it would originally have been done. Of course, the new work is beautifully done, although in oak posts and beams where originally it would have been done in brick and stone, but the tiles are the Roman style still used in the area. 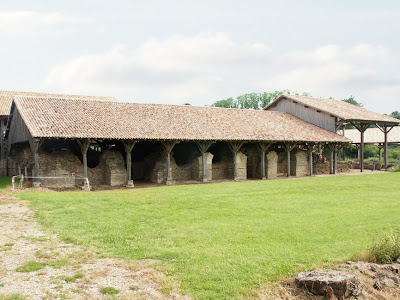 From the bathhouse you walk up a slight hill through what would have been the centre of town to the Temple. It is difficult to imagine this bucolic spot as a thriving town, because none of the houses are visible. Only a small portion the site has been excavated, but even this has been re-covered. I know why this is done (conservation and all that) but seeing just one house would have made a difference to me

The temple is in the shape of a Greek Cross and was built in the second century over a spring dedicated to a Gallic deity . The Romans often did this, deciding that a local god was the same chap (or chapess) as a Roman one, and dedicating a temple to both. (One example is in Bath in England). 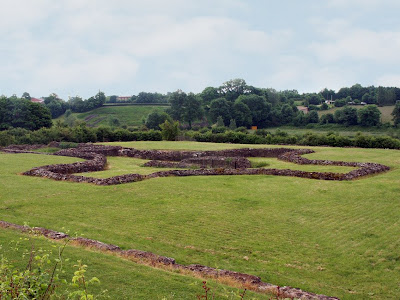 There is a great aerial photo of the temple here.

Sanxay is a really interesting place, and even has a guidebook in English for the non-francophones amongst us as well as a decent book/gift shop. When we there there, even though it was a lovely early summer's day, we were the only visitors on the site for most of the time. Sometimes for non-french speakers it is difficult to find out what tourist attractions are around,and as is often the way with a lot of our "discoveries" in France, I found out about Sanxay by browsing the Survol de France website.

Nice blog you got there.

If you like to watch Asian movies welcome to check out mine, updates daily!