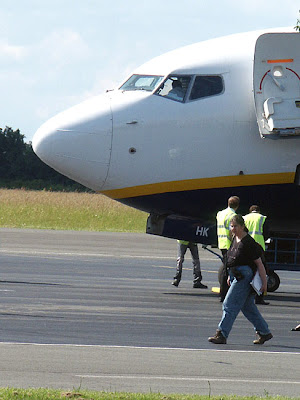 bonjour
Your regular polite greeting in France, being literally 'good day'. In rural areas you use it on everyone you encounter in the street, in the shops and when out for a walk, whether you know them or not. None of this citified pretending the other person doesn't exist – in rural France everyone greets everyone else politely with bonjour or m'sieu, dame or possibly both. Some text books will tell you that if you don't add monsieur or madame to your greeting you are actually delivering a subtle French insult by being so disrespectful. I would say though that tone of voice and body language play a much bigger part in this game. If you say bonjour in a clearly friendly manner no one seems to notice or care if there is a monsieur or madame attached. It might be different if I was actually French though.

Once a week un petit troupeau of about a dozen school kids clatters down our street. I've never worked out quite where they are coming from, or indeed, to whence they are going (although I assume the gymnasium or swimming pool). Although they hardly give one a second glance as they bound along, many of them will call out bonjour as they pass.

One day I was standing in the street chatting with our 80+ year old neighbour (elle est d'un âge certain) as the skittering human avalanche approached. Our neighbour looked after them sourly, shook her head and tutted that les jeunes never say bonjour any more. I didn't like to point out that, in fact, several of them had quite clearly greeted us, and perhaps she is un peu sourd.

If the person you encounter and greet is also someone you know then the ritual is extended to shaking hands, or if you are particularly friendly, exchanging bises (pronounced 'beez'), those quintessentially French air kisses. (Aim for right cheek to right cheek first and in the Touraine it is two kisses, four if you are very pleased to see one another. In Paris four is standard, so goodness knows how they indicate an extra level of fondness – or perhaps one doesn't – too unspeakably beauf ?)

If everyone is feeling casual and relaxed and the greeting exchange is between friends, you can ring in a Salut ! , which is the equivalent of 'Hi!'.

If you run into someone for a second time in the same day, you can apparently greet them with rebonjour. I don't think I have ever heard a French person using it, but I have tried it out a couple of times on our nice friendly neighbour Monsieur M. who I generally see in the street at least two or three times a day. He hasn't reacted as if I've said anything odd, but there is always the question of whether he has understood anything I've said to him. His wife occasionally stops to enquire about progress on the house, but when I get in too much of a tangle she will stop me with [we will continue this conversation] 'when you are more fluent'.

People here in Saint-Aignan do say rebonjour once in a while. It's in situation where you have seen and formally greeted a person earlier in the day, and then been separated before seeing each other again. It's nearly always said with a conspiratorial tone: we've already said bonjour to each other though the others you are now greeting might not know it.

Merry Merry Christmas Simon and Susan. I don't know why as a natural born Texan I desire for it to be frosty and cold on Christmas as I have only every known it to be dreary (weatherwise), almost rainy and a tad humid. Yick. Your photos most certainly help.

Spending time between the chilly (in more ways than one) Savoie, and the Vaucluse, can be confusing. The 'bonjours' are pretty standard everywhere, but the bise (two kisses) in the Savoie is regularly missed out, even between reasonably close acquaintances at times. Then like the day before yesterday I find myself back down south after a week in the mountains, go round to a neighbour's for an 'apero', and there's a horde of unknown kids (sub 10-ish) behind the door, for whom it's completely natural to have a single peck on the cheek, even from a complete stranger. By the time you've down the rounds of about 20 kids and parents (3 bises), you'd be lucky to escape unbugged if there are any flu viruses about.

Peter: Just be thankful you are not commuting to work on a train – now that's a dead cert way of catching whatever virus is going around.