Dragonflies in the Southern Touraine and Berry 2008

2008 wasn't a fantastic year for dragonfly watching. I don't think numbers were particularly down, but there was a dearth of the fairly still warm weather that gets them up in the air and visible. Nevertheless, we still managed a few more species to add to the personal checklist for the area, and here is a selection of what we saw: 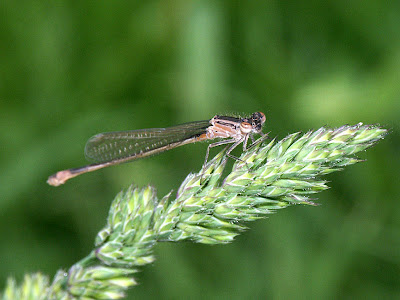 The females of this very common damselfly come in several attractive soft colour combinations. I wrote about them in last year's account of our dragonflies and damselflies, with two more photos. 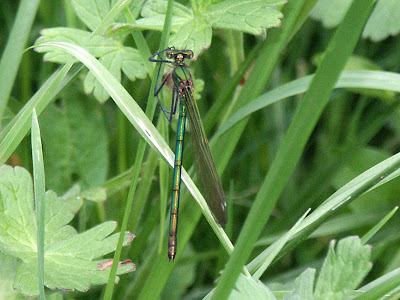 Another lovely I wrote about last year. Although this species is apparently common in the Southern Touraine and Berry, the truth is that populations on a local level can be easily eradicated by pollution, overly interventionist management of watercourses eg canalisation, cutting streams off from their exits into bigger streams, over-exploitation by irrigation causing a drop in water levels or flow, drainage schemes to create more land for crops, even inappropriate mowing regimens undertaken at the wrong time of year or too close to banks and shorelines, or allowing too dense a growth of trees to spring up too close to the water's edge. 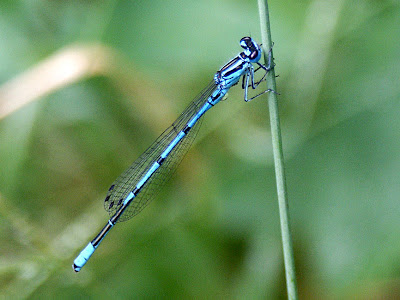 One of the commonest damselflies in Europe, I wrote about this pretty little species here. 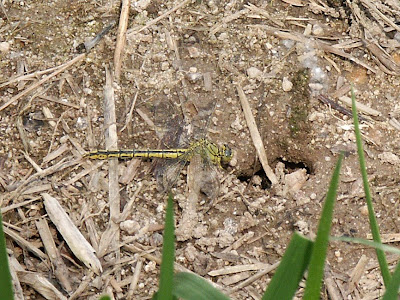 This female Western Clubtail Gomphus pulchellus was not very co-operative about getting her portrait done. This is as close as we could get. The species is called le Gomphe joli in French, and is endemic to (ie occuring only in) south-western Europe, France being its stronghold. They like very slow or still water, such as the gravel pit that this one was photographed near. There are half a dozen lookalike species, three of which occur locally, but all rarer than this species. The flight season is rather short, May to July. 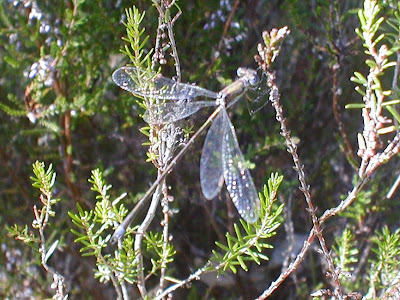 Lestes virens vestalis is the third of a possible five species of Spreadwing that we can see in the Southern Touraine and Berry. This one, le Leste verdoyant in French, is the smallest and plainest. It was photographed in a hurry on an extremely windy day in September in the Bois de Las (a part of the Réserve naturelle de la Chérine, not accessible to the public) where I was surveying for Diptera (flies). Like most Spreadwings, it is very much a species of wet grasslands, and so is common in the Brenne. I wrote about its bigger, more showy cousins, the Migrant Spreadwing and the Western Willow Spreadwing last year. 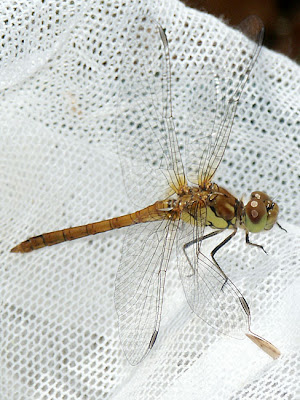 This young lady got accidently swept up from the long grass where she was resting into my net when I was surveying for Diptera (flies) at la Rondières, an area (no public access) managed by la Réserve naturelle de la Chérine in la Brenne. She would have been sitting completely still, hanging on to a grass stalk below the seedhead and completely invisible to me, so well does her colouration camouflage her presence. She is a teneral (juvenile, not fully coloured) female Ruddy Darter Sympetrum sanguineum, and although she sat for quite a while on the net, eventually flew off none the worse for the experience. I thought originally that she was a Common Darter, because she does have very fine yellow stripes on her legs, but Eric Mâle-Malherbe, the local expert, assures me she is a Ruddy Darter. It takes a lot of experience to identify these yellow darters – there are several very similar species and they all fly together. This species is very common from June to October anywhere there is still water with lush marshy vegetation all through France and much of England. In French, the name is le sympétrum rouge sang. The reason for all this emphasis on redness is that the males are a quite bright orangey red. They are strong migrants, and some of the French population ends up in Britain every year. 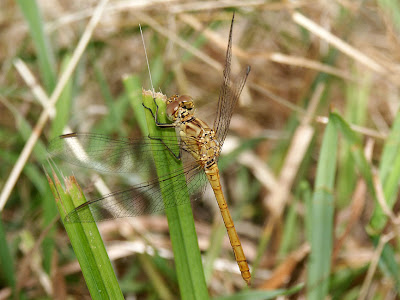 This is a young male, and again I had to ask Eric his opinion. This time he agreed with my identification of it as a Moustached Darter Sympetrum vulgatum, although it is nigh on impossible to be absolutely certain of these yellowy teneral darters from photos. This species is known as le sympétrum vulgaire in French, and is another one that is easy to mistake for a Common Darter. It is a localised species, to be seen around standing water and the surrounding grassland in the Brenne from June to October. The moustache in question can be seen better in this picture, as well as the secondary genitalia which told me which sex and species this was. He will get redder with time. 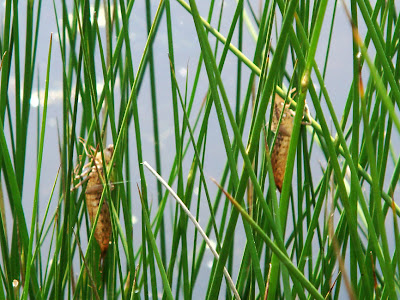 Dragonfly larval skins are called exuviae. The species that emerged can be identified from these remains as each have exuviae with unique characters, just as the larvae (or nymphs) and the adults do. Unfortunately I couldn't identify these, as not enough detail is visible in the photo. Eric says he thinks they are some Aeshna sp (called Mosaic Hawkers in English, or les Aeschnes in French), some of the largest of the European dragonflies. My mother took this photo in the Brenne. 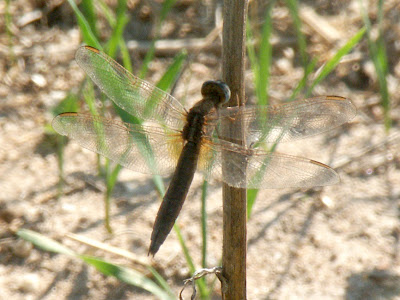 This battered old lady posed for us on the edge of a field near a gravel pit just outside of Yzeures sur Creuse. I struggled to identify her, because she has grown so dark with age, but as soon as Eric said she looked like a Crocothemis erythraea I realised he was exactly right. The combination of the patch of yellow on the base of the lower wings, the white stripe between the wings and legs that are not black could only add up to a Broad Scarlet (la libellule écarlate in French), and according to one of my references, their favoured habitat is gravel pits. The females, who start out a sort of mustard yellow, not the scarlet of their male counterparts, often darken to this rather odd charcoal colour. We would have liked to get closer to this one for better photographs, but although she obliging sat in the sun on this stick, making short flights and returning again and again, there was a deep roadside ditch and an impressive band of stinging nettles between her and us, so this is the best photo we could manage. The Broad Scarlet is really an African species that is common around the mediterranean and for the last 30 years has been heading north, like so many dragonfly species. It is common in the southern Touraine and Berry from May to September. 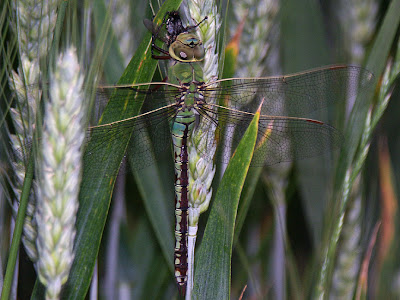 This female Blue Emperor Anax imperator, the largest dragonfly species in the Southern Touraine and Berry, was photographed in a wheatfield near Preuilly at 9pm one evening in late May. Simon and I had gone for a post-dinner walk and encountered her 'hawking' up and down the track through the wheat. Eventually she caught a Flesh Fly Sarcophaga sp and settled down to eat it. We were so close to her we could hear her crunching as she munched. L'Anax empereur, as they are known in French, is common in most of France and southern England and Wales. It is easily identified by its large size, apple green thorax and downcurving abdomen in flight. They are most often seen patrolling up and down a linear territory like a track, hedgerow or ditch, and will come up to you to inspect you when you first enter their territory. After they have seen you once, they will ignore you on subsequent passes through their territory – indicating that they have a visual memory.

wonderful dissertation on this beautiful bug!! they are found all over the world - we spend a couple of months each summer on Georgtown Lake Montana and there is a great hatch most days in July-August - the wind etc drives them out to the weed tops and the trout cruise to get a bite - makes for great fishing if the fisherman can match the hatch and be patient!!

Hi Dale: yes, we get sychronised mass hatches in July here in France too, and it is odd how often they seem to choose a very windy day. In Europe though it is mainly the mass Mayfly hatches that fishermen try to link in to I think.