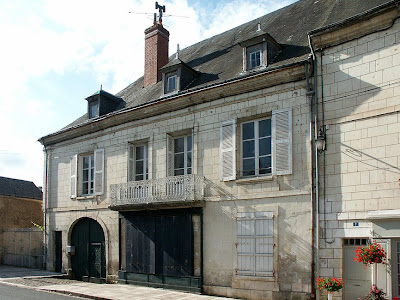 Huguet's shop, run by 'Father Mathieu' occupies two lots. Auvergnat by birth, he fell into the category of middle class shopkeeper, a group that was not lacking in Preuilly.

He went to mass and found himself thus classed amongst the 'white arses' (culs blancs*) while the 'red arses' (culs rouges*) claimed a fashionable anti-clericalism. A travelling singer, to satisfy his bistro customers, had incorporated into a song: l'père Mathieu, d'un air pieux, s'en allait prier l'bon Dieu... ('...Father Mathieu, with a pious air, would pray to the good God...')

His business was still prosperous in 1920, the habit of dressing in the latest Paris fashions having not yet reached our region. Outfits in corduroy, beige or greenish, would be unpacked and laid out during fairs.

Inside, he sold fabric by the metre, using a wooden ruler which descended from the ceiling above the vast counters. The bulky rolls were kept on shelves taking up three sides of the store.

His principal salesman, Henri Jambier, during the week, went out to the local farms, enthusiastically selling everything you could imagine for a coming wedding to everyone from the bride to the grandmother.

For this work he had acquired the first post-war car, a yellow Citroën trèfle with three seats, one in the boot (trunk) at the rear.

Monsieur Jambier, unlike his boss, was a dyed-in-the-wool Republican.

Monsieur Huguet, with the help of his wife, had five girls, but they were desperate to have a boy. In time his business was taken over by his son-in-law Lévrier.

Roger Lezeau's anecdote translated by me from his article in Les Cahiers de la Poterne, No34. Monsieur Lezeau was born in 1912 and is a great source of knowledge about the history of Preuilly.

The big glass shop window still exists, and apparently one can glimpse some tiles depicting the patron saints painted by Marie-Françoise Lévrier, but we have never seen these. The shutters on the front are very rarely open - the exception being a couple of times during summer this year. The building is now a private home, so I expect the shutters stay closed to stop sticky-beaking foreigners like me peering in, or more probably, to keep the noise and dust down in the house, as it is opposite the bus stop (3 buses a day) and rue des Halles is one of the main thoroughfares in town, so in Preuilly terms, quite busy.

*Line infantrymen (ie ordinary soldiers) in Napoleon's army wore red trousers, as opposed to the soldiers of the old army, who wore white trousers. Thus good Republicans were culs rouges, those who continued to adhere to the old ways were culs blancs.
Posted by Susan at 10:00

His Suasan,
This is fascinating !
For my hubby and mysself,we do Genealogy in Touraine. So,stories & publications on local History are a bit like the "cerise sur le gateau".

Barbara – you can buy the Cahiers de la Poterne in the tabac/newsagent in Preuilly, or from the Société Archaeologique de Preuilly (they will have a stall at the Saffron Fair in February).

"Sticky-beaking"? Please explain to those of us who don't get out much.

It's an NZ/Aus expression. A sticky beak is a nosey parker, a busy body.

For your American readers, it should be said that a Republican, in a French context, means somebody who sticks to the 1789 republican principles.

Thank God [!?] the best thing that ever happened to France, second only to the invention of tepid water, was the inception of the separation of Church and State in 1905.

The Republican Party, in the U.S., is mostly comprised of right to extreme right religious zealots. Vive Obama!

C-H – thanks for the footnote. As an Australian I understand the term Republican in more or less the French sense, and am always a bit bemused by modern US politics. Having said that, of course Australia is not technically a Republic, and the Liberal Party there takes a conservative line (with a few honorable exceptions).

I love your blog. You and Simon are fountains of interesting and juicy history/natural information. As an American, though, I understand that each country may have similarly translated political party titles and yet very distinctively different platforms and goals. I am a Republican (in so far as I voted for that party this election) and I love the Lord but I don't find that the party (either party really) can be generalized in such tidy terms. I would have voted for Obama had there not been two issues where he was in opposition to my political views.

Wait, can we back up here and get chm to explain "the invention of tepid water"?

Carolyn, you'll certainly agree with me that it takes a genius to find out that if you let boiling water cool off enough you'll get tepid water. CQFD: Ce qu'il fallait démontrer. In Latin: QED : Quod erat demonstrandum!