... and as you may be feeling crapulent, it is possibly time to talk about "vomitorium".*

Aldous Huxley (he of "Brave New World") had it both right and wrong:
The Romans did have vomitoriums. His assertion that they were used for vomiting is, however, completely an invention all of his own making. He mentions it in his 1923 novel "Antic Hay" and the story took off from there.

A vomitorium is a passageway - usually in a theatre or amphitheatre - from whence people spew forth. Sometimes they are used as an entrance to the arena, but they are also used as an exit from the theatre. Wikipedia has a good illustration

When we went to the Roman site at Sanxay I was pathetically excited to be able to stand in a vomitorium. I even took a photo. 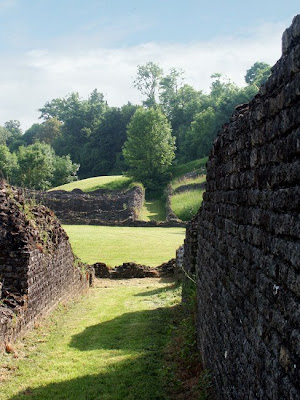 You can see the corrresponding vomitorium on the other side of the arena as well.

In this photo you can see the vomitorium (on the left) just where the terracing begins. I'm not sure what the rebuilt doorway on the right is all about 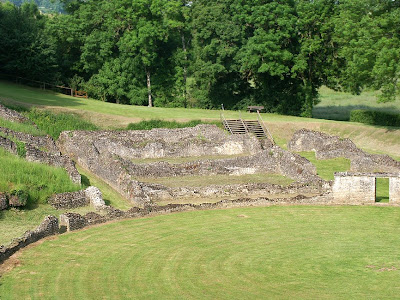 *true wordlovers will notice I managed to squeeze in two words people could possibly misconstrue. I do smug, occasionally. S
Posted by Simon at 10:00

We wish you a happy and healthy 2009, as much of it in France as possible.

My word verification (if I move quickly) is "foodi."

Just like Aldous Huxley, I thought a vomitorium was used for what he says.

Didn't the Romans have a great sense of humour? Only second to Simon's?

BTW, have both a very happy and prosperous new year!

For someone suffering from a 'gastro' your blog today made pleasant reading. Bonne Annee anyway! (Apologies for the lack of accents, my keyboard gives me a choice of English or Thai)...

Hi Susan & Simon,
Oh the discoveries we make on your pages !
Wishing you both a happy and yes, healthy year.

Thanks for all the good wishes everyone. We hope each of you enjoy 2009.

Peter: I use a QWERTY keyboard too, but learnt the DOS commands for accents eg é is typed by holding down Alt while keying 0233 on the numpad. Hope your gastro doesn't knock you about too much.

Susan it may be down to the Thai origins of my laptop, but that function doesn't work for me - I've only got the numbers along the top, no numpad, and ALT 0233 with those does nothing at all...

If you look in your list of programmes you should have a Character Map which allows you to copy and paste accented letters – bit more of a palaver, but you get used to it. Otherwise, set up macros for the most common ones (something I can never be bothered to do, I must admit).