I mentioned at the end of December that we were going to visit the Marché aux truffes de Marigny-Marmande. We stuck to our plan, so on the Sunday after Christmas we set out (later than we wanted to, admittedly) well wrapped up against the cold, determined to buy our first truffle. 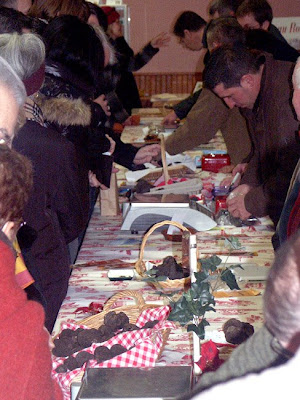 The market is held in the Salle de Fêtes, with a couple of large tents attached to the front. The real business of the day, that is, wholesalers and chefs negotiating deals with the truffle harvesters for the best quality truffles, is done at some outrageously early hour of the day. By 9.00 am, when the general market opens, there will still be a selection of top grade truffles available, but by the time we arrived, at about 11.00 am, there was only déclassée (ungraded) truffles left. The ungraded truffles are too small or too worm holed to be given a quality rating. This year they were going for €850/kilo. Top grade truffles were €2000/kilo last year and déclassée €600. They are sold at the market already cleaned up, but if you think you might find your own truffles in the woods, 'amusing' truffle accessories in the form of brushes with truffle shaped handles are available. You can also book to go truffle hunting with at least one of the more enterprising château owners and his dog, or buy a sapling with roots impregnated with truffle spoor for your own garden.

The Marigny-Marmande truffles are black truffles Tuber melanosporum, or les truffes in French, which are found in France, Italy and Spain, growing in the earth in a symbiotic relationship with broadleaf deciduous trees, mainly oak. They are harvested from November to January. 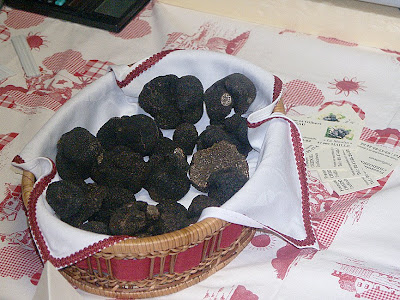 I did the rounds of the truffle stalls, looking and smelling, but not talking to the vendors much because it was very crowded and busy by then. I decided that the Chedouzeau family truffles from Maillé were the best quality for the money, and moved in for the purchase.

That's our truffle on the scales 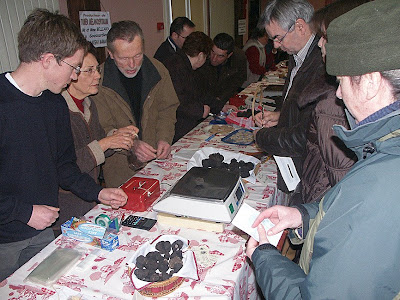 A 23g truffle, slightly smaller than a golf ball, cost me €17. It smelled nicely bosky, but not overwhelming – I put this down to the cold weather as much as anything. I had been told that a 20-30g truffle was enough for two people. 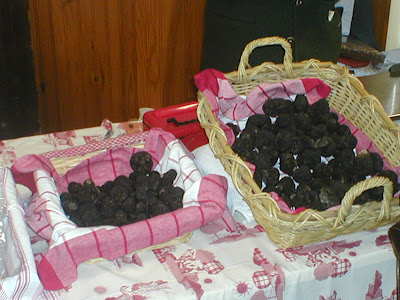 Once home, for a late lunch, I prepared scrambled eggs and shaved half our truffle on to the warm creamy eggs. Hmmm...smelled good, but the taste was not exactly orgasmic and Simon likened the texture to sliced almonds. Actually, the texture is curiously crunchy, but simultaneously, and more as you would expect, densely spongey just like mushrooms.

I put the other half of the truffle in a jar with some eggs. Eggshell is porous and absorbs flavours and aromas, so this is a traditional method of making your truffle go further. Several days later we ate the eggs, boiled, and mashed into fresh bread. Once again, nice aroma, but almost no flavour. By this time Simon had decided that truffles were a complete swindle, as he wasn't even getting the aroma. I should have guessed – I've bought ready prepared truffle eggs (and truffle oil, which is a similar principle) before and been underwhelmed – but it is important to do these things for oneself.

As a last ditch attempt with the second half of the truffle, I added it to a mushroom sauce with pasta. This time, the truffle revealed a nutty flavour. Perfectly pleasant, but frankly, ceps (cèpes in French, or as many people know them, porcini, in Italian) are better value and have a reliable earthy, meaty flavour that will knock your socks off. Is my problem that this is what I expected from the truffle? It's what the aroma leads you to believe the taste will be. Or is it that I simply wasn't using enough in one go (having made a two serving truffle stretch to four)? Should I have cooked them for longer (are they like vanilla and saffron, and need a bit of time as well as a gentle heat to give of their best)?

I like the idea of the ritual of going once a year and buying a truffle, and would happily do it again, after working on recipes that might enhance the eating experience and reading up on how to use truffles to best advantage. I had never prepared fresh truffles before, but had seen it done on the telly, and it looked easy. Certainly, producing the requisite wafer thin shavings was very easy and rather fun. In retrospect I think I would have been better doing a bit more research and getting les trucs ('the lowdown') from people who know their truffes, with regard to making sure the flavour develops well.

Email ThisBlogThis!Share to TwitterShare to FacebookShare to Pinterest
Labels: Food and Drink, Markets, Towns and Villages near Preuilly

Hi Susan,
I tasted truffles for the first time two weeks ago (in a restaurant) and my feelings are pretty same as yours - interesting texture and aroma, but I haven't felt any special taste. The cepes or other kind of mushrooms seems to be better choice for me also - you can pick them up by yourself for free :)

Hi Susan & Simon,
Happy New year to you both !

What an interesting experience. I'm among those people who have never tasted a truffle, so I was interested in your findings.
I would have done like yourselves; just tried a small truffle.

I have absolutely no idea on the matter, but you should research if conserving the truffles improves their taste.

All the best to you both;

"you can pick them up by yourself for free" – if you're brave enough / knowledgeable enough; and can get to them before the fungus gnats, flies and slugs do :-)

Reassuring to hear that we are not alone in finding the truffles a bit too subtle. On my list of French delicacies like white asparagus – clearly my palate did not grow up in central France :-)

A truffle omelette - delicious! But the first time I made one I committed the cardinal sin of treating the truffle like a mushroom, chopping it up, sticking it in the pan, and pouring in the egg mix. No taste at all. Apparently the secret is to prepare the mix, put in the finely chopped truffles, swirl around a bit, and leave in the fridge for a good 24 hours. Prepared for me by a Frenchie, it was absolutely delicious - the flavour was really powerful. I've tried it myself a few times since, and it's worked every time. However my culinary skills are pretty limited so I haven't progressed beyond omelettes yet...

Barbara: certainly drying ceps to conserve them intensifies the flavour, but my reading suggests that conserved truffles are second best, and are conserved more as a money making scheme to extract the flavour twice.

Peter: your advice makes sense to me and fits my general thoughts on why the truffle might not have given of its best. Come to lunch on 29 or 30 Dec 2009 and see how I do :D

Thanks - might take you up on that! One way we used to keep truffles out of season was by freezing them. When defrosted, they still seemed to work well with the 24 hour omelette preparation system...

Haven't tried to find any truffles for a few years now, for one reason or another, but we used to be able to find a few (ssh!) - I need to find a more trustworthy truffle hunter, must blog about our previous 'helper' soon...

I've often wondered if truffles were as special as we are led to believe, but now I don't think I'd spend a lot of money to find out. Interesting post, it must be fun to chose one in the market.

Tony: I have high hopes of Peter's (The FrogBlogger) tcchnique. Perhaps all interested parties should get together on 29 or 30 Dec 2009 and test the results? (The market is always 28 Dec, I believe.)