An update on the Bad Neighbours

I wrote last year about Malvoisine, commenting on how strange is is to call your hamlet "the bad neighbour" and putting forward my own theories for the name.

There is one theory I didn't consider, and it is this:

During the war with John Lackland (yup - the Robin Hood and Ivanhoe chap) the Chateau du Lion was held at one stage by English forces (or at least, forces aligned to England), and was claimed to be impregnable. This didn't stop the French forces under Phillipe Auguste from bringing up a huge war machine ("un ancienne et terrible machine de guerre") - either a catapult or a trebuchet - to lob stones at the defenders.
The Chateau from Malvoisine 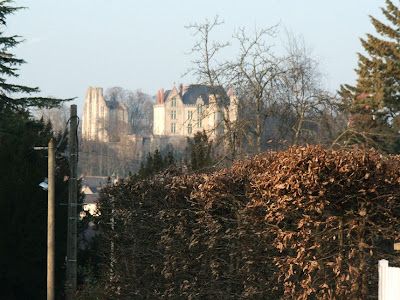 The machine really must have been a monster - it is almost 1km from where it is said to have been sited to the chateau, and most literature gives the range of these machines at about 300 metres. It is easy to suppose, though, that if the machine was closer to the river then it could quite easily have been used to throw rocks into the town itself. All this happened as part of the events described in yesterday's post, and as a direct result of this our house (or at least the barn part) was built.

One will never know if it was the defenders or the attackers who called this machine "the bad neighbour", but the name stuck, and on 9th February 1585 the area was officially named "Malvoisine".

King John was not a good man —
He had his little ways.
And sometimes no one spoke to him
For days and days and days.
And men who came across him,
When walking in the town,
Gave him a supercilious stare,
Or passed with noses in the air —
And bad King John stood dumbly there,
Blushing beneath his crown.
A.A. Milne
Now we are Six