Everyone likes to think they have good table manners, and I am no different.

The only thing I was in trouble about as a kid was wanting to sit at the table without a shirt on. This apparently, even in Australia when you're 11, is a no go. Everything else I did at the table I did quite acceptably: no elbows on the table; I tore my bread roll rather than cut it; and I even used my knife and fork in the "correct" hands. (For readers in North America, this meant my knife stayed in my right hand, my fork in the left, and I cut my food as it became needed.)
Happy people at a restaurant. It was at the end
of bath moving day - no wonder we look happy. 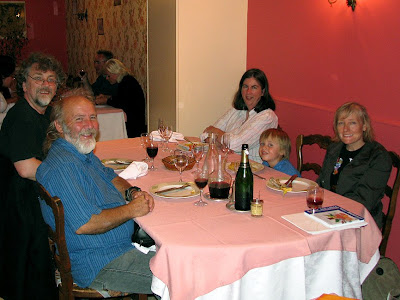 This stands me in fairly good stead in France, with one or two exceptions: elbows on the table aren't a problem - it means you can lean towards a conversation looking interested, and the bread roll, whilst still being torn, goes on the table rather than on your plate. In fact, you don't even get a side plate in most restaurants. To tell the truth, table manners in France aren't something they take too seriously - you aren't likely to cause serious affront as long as you're interesting.

Except for one thing.

It really isn't done to put your hands below the table. If you're from the USA and some parts of Canada, this means forgetting what your mother told you, and keeping your hands above the table. Sitting like a lady with your left hand in your lap after cutting your food isn't likely to really cause real offence (you're foreign, and probably can't help it), but all the French people at the table will spend the whole meal wondering what you're doing with that hand they can't see. Especially if you're sitting next to someone else's husband...

You know...I thought maybe it was just some of the people around my area, but this "hands above the table" thing is real! I am so relived I am not the only one! I remember when I first got here I was amazed at how many people hold their fork with a fist, like a cave man. As if it might run away if they loosen their grip.

The last para. makes me laugh. I should ask my in-laws about it

Prise my fork from my cold, dead hand....

I can relate to that!