What with all the excitement attached to actually selling the house in Australia, we might have been forgiven for stopping a while to draw breath. The problem we have (or me, anyway) is the fact the sale took so long to happen the practical aspect of moving to France had began to fade into a fantasy world. I am now putting my mind to a scheme of work.
Our house, the first time we saw it. 29 May 2006 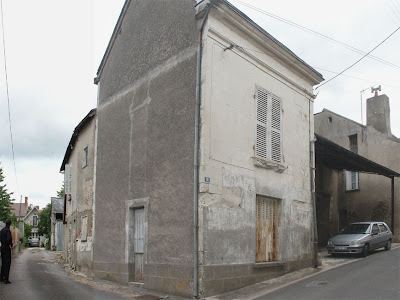 One of the main problems with a project this size is timing. Timing is everything. We have a 2½ bedroom house with no staircase, no heating, no insulation and no hot water. There is no bathroom (incorrect, in a way, we have a bathroom with no floor and no fittings). We have electricity, but the whole house needs rewiring. All the walls needs insulating and dry-lining, but we can't really do that until the plumbing and wiring is taken care of. We can't do the wiring and plumbing until we at least start the frames for the dry lining. Likewise, we can't install the bathroom until it has a floor, but the plumbing has to go in first, then the wall frames, then the wiring. Of course, if we want underfloor heat (and we do) that has to be done before anything else. So does the repair of the stonework around the doors and windows. 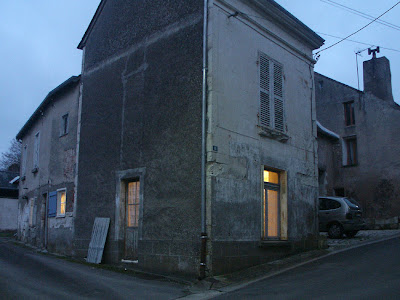 So the first thing we need to do is: get a bathroom. And maybe a staircase (because Susan isn't a fan of the idea of using a ladder and wants a staircase but I like having a large hole where the staircase should be because it means we don't have to squeeze stuff up a narrow passage). And install underfloor heating. And fix the masonry.

This means that we have 3 things to do first. Or four. Or maybe five, because we have to get the internet connected without it costing an arm and a leg because there is no way we want to be in France but not connected. For some reason, in France they think you want to pay huge amounts of money every month to get your internet, free phone calls and online television delivered. Two of these I have no interest in having, and even less interest in paying for!

Sensible people would, at this stage, get a project manager. I have got a big piece of paper. And a pencil.
Our House, June next year 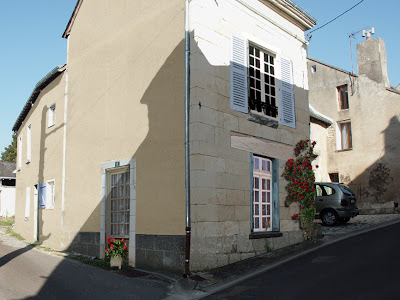 The heartening part is that the thing we really had to do first, we have done already. We have a roof, and the house is watertight. We also have a toilet, and running cold water. If we were feeling really hardy, we could live there now. We will be living there while most the work is being done. All we are waiting for is the weather - and a certain amount of boldness.

Email ThisBlogThis!Share to TwitterShare to FacebookShare to Pinterest
Labels: electricity, Our house in Preuilly

Phew, I am exhausted just reading that!

Bring it on, indeed.

I look forward to reading about your progress.

i think you have the boldness. the cold water only will take care of that.
i'm thrilled.

Wow such a big projects, but at least now you have sold your house in Australia.
:-)

Simon and Susan, this is Dave in San Francisco. My wife and daughter surprised me for my 50th birthday with 10 days in the Loire. We did a house exchange with a lovely family from Le Grand Presigny, but drove to Preuilly Sur Claise for two dinners with the enchanting Francis and his dog Lustic - co-proprietors of La Claise restaurant down on the river. So imagine my surprise (and enjoyable few minutes of reading) when I discovered your blog while Googling Francis to find his address for our rather late Christmas card.

What a wonderful project you've undertaken. I look forward to seeing the progress on your house, and hope that the futuristic photo pales by comparison to the final outcome!

BTW, the Follow This Blog link seems to be broken!

Welcome to the blog. We have photos of Lustic (although we thought the dog's name was Rustique) but have not as yet posted them.

You're right about the followers link not working. I have no idea how to fix it though - it's a google standard widget.

Hi Simon, I check out Walt's site every day from the blog followers link on your site, so it works from here in sunny Queensland....Margaret

Hi again, I noticed a door shape on the upper level of the house, looks like it may have been bricked up for a long time, would there be any advantage to opening it up for a window on that side ? Something that would have to be done before you started insulating and lining.

Hi Margaret: we thought about opening up that bricked in window / door, but have decided against it. The room is very light and pleasant without, and the window would overlook our neighbour rather. Also, it's very handy to have a wall with no openings that you can place the bed or other large furniture against in a bedroom. The other walls have, respectively a door, a fireplace and cupboard niche, and a window in the middle of them.

Hi Simon,
I see that you haven't lost your touch with Photoshop!
Congratulations. How did you do the shades on the walls?

The textures were "farmed" from a number of photos I have taken in Preuilly - the crepi comes from a building on the Place des Halles, as do the upper level window and the side door. The stonework is even more local, being taken from the building across the road from us. This meant I was able to get the right colours and textures for Preuilly. It is then just a case of cutting the material to fit the shapes.

The shadow was actually quite easy - I was working on a photo that had the shadow and all the new elements added into the photo were on different layers, so all I needed to do was set the "select" tool to a faily narrow range, and select the shadow. Then I just used the "brightnes/contrast" tool and reduced the brightness. I did this on each of the new layers, adjusting for 3D depth.

Usually I dont use that tool, I use the levels tool (a lot more accurate) but in this case it introduced a range of psycadelic colours I wasn't particularly after.

Thank you for the explanation.
I should learn how to use layers, but it seems a little complicated for me. The tool I use most is the stamp. It allows me to remove unwanted features and replace them with the surroundings.
Just like you I don't use the auto level too often. Colors and contrasts are too harsh. Photoshop is really great!
Again congratulations. It's perfect.