This view no longer exists 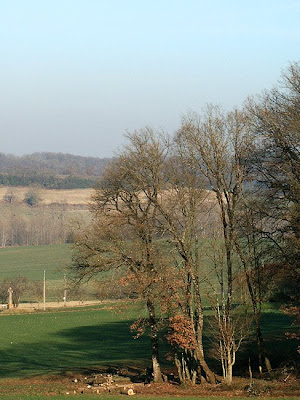 In autumn 2007 we stayed in Roux and noticed that a big old oak tree on the edge of the woodland was down. It had blown down, bringing with it its semi-epiphytic population of ferns growing in the crucks of branches. The smell of the freshly sheared wood was amazing – very resiny and almost spicy. We were sorry to see such an old tree come to the end of its life, but thought that it was a natural process.

The smaller oaks, above, cut into logs, below 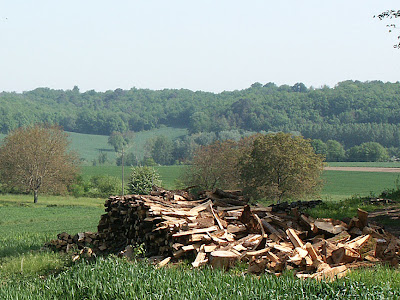 Later, at Christmas time, we found out that the farmer who owned the land had taken the opportunity to cut up this tree, and to chop down its half dozen companions, which were so foolish as to cause the woodland to jut out a bit into the wheat field. The neighbours were scathing when I asked why he had done this. 'For money!' they spat. The wood was cut into lengths and will be left to age for a few years, then sold as firewood. It will be worth quite a bit (at least €30 per cubic metre and probably more), and he will have gained a few more square metres that can be put to the plough.

A rather adventurous Lesser Stag Beetle on the oak logs 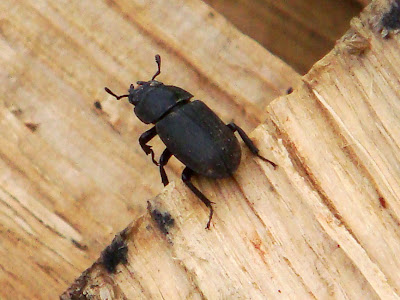 While the wood lay there this summer, the wood boring beetles had a lovely feast. In biodiversity terms there is only one thing more precious than a stack of aging oak, and that is an old standing oak, still alive, but with a few dead branches.

These beetles, Clerus mutillarius, were all over the cut timber 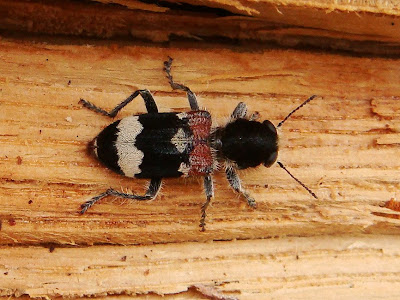 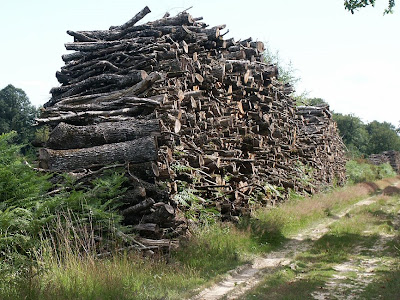 Aged oak is considered one of the best firewoods in France, but it is becoming harder to source. The area of land under forest is growing in France, but there is increasing concern that it is not the slower growing high value woods like oak that are being planted. Too often oak is being harvested, but replaced with quick return low value soft woods – pine, fir and larch. It seems astonishingly shortsighted.

The largest forest near Preuilly is the Fôret de Preuilly. Our friend J-P, who grew up in Preuilly and went on to become the Director of the Parc Floral de Paris, which is partly an arboretum, is rather critical of the management of our local forest, saying that they are falling for the lure of short term profits over long term sustainability. There are now large areas of softwoods throughout the forest and many very old oaks have been felled and sold, but to be fair, there are many areas of newly planted oak, and well managed oak forest being harvested for both lumber and fuel. A number of the veteran oaks have survived the cull, and are now a feature on a popular walk for visitors, along with ancient metal working and tile making sites, parasitic orchids and wild 'asparagus', fungi and invertebrates, all able to thrive in a stable and well managed ecological system.

The Fôret de Preuilly, where there are well managed areas for fuel wood 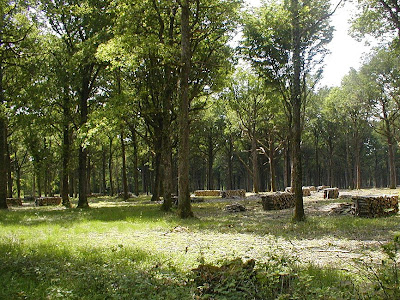 The most heavily forested areas in France are the Aquitaine and much of the Alps, but Centre (where we are) and the neighbouring regions of Borgogne and Limousin are also very wooded and produce around 1 million tonnes of fuel wood each per year. Poitou-Charentes and the Auvergne produce less. France consumes by far the most fuel wood of any country in the European Union (20% of the total EU consumption) although per capita, French consumption is sixth, far behind Finland, Sweden and Austria.