Buildings on the Market Place - No 1 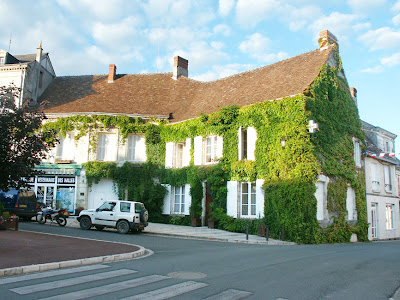 The Virginia Creeper covered house on the right is 1 Place des Halles and has an extremely interesting history; in 1920 it was the co-operative bakery. As far as we can work out, these were set up in each town as required by law to ensure that bread was fairly distributed to all in France, where extremely hard times followed the devastation caused by the First World War. The building on the left is Dr Martin's veterinary surgery, which I have already written about.

It was here that one found the co-operative bakery created out of necessity during the war. Monsieur and Madame Ridet and their daughter Berthe ensured that there was bread for sale but did not engage in its manufacture. Monsieur Nibodeau succeeded them.

At this time the baguette*, as in Paris, made its first appearance in Preuilly.

Sourdough (miche) was sold whole although other breads could be cut, enabling the baker to add a small slice to an order to make up the weight** [according to Roger, known as the amandon, or 'kernel', but I wonder if this is a play on words, because donner la miche = faire l'aumône = to give alms, and the baker may have been more or less generous with people.]

Ranges and ovens were not yet in use in town houses, and you could take tarts, stuffed tomatoes, roast veal, and even a dish made from haricots blancs called les pouais [which I fear may be an onomatopaic word] to the bakeries to cook. The flavours were greatly enhanced in the oven, delighting the nostrils of the kids charged with fetching the oven baked dish.

But to return to our co-op (copé) – you paid for the bread there with ration cards, the value of which varied depending on their colour. Although rationing did not cease immediately after the war, the quality of the bread improved rapidly.

The shop has been gone for decades and the building is now private homes.

Roger Lezeau's anecdote translated by me from his article in Les Cahiers de la Poterne, No34. Monsieur Lezeau was born in 1912 and is a great source of knowledge about the history of Preuilly.

Food shortages did not begin to affect [the more] southern unoccupied part of France (where we are) until 1916, but in May of that year, the so-called 'national bread' was introduced. It became less and less palatable throughout the duration of the war and by November 1916 it was rationed. The harvest of 1916 had been generally poor and the winter of 1916-17 harsh. Women workers in Paris led food riots, forcing the government to introduce rationing. Rationed foods in the north were paid for using a specially issued paper currency known as bons (which I think must have been issued by the Germans. I think the ration coupons used later and in the south were different, but also known as bons). [Our regular French reader, CHM, tells me that the bons were the same throughout and administered by the French government on French soil. I think my confusion arose because it can be difficult separating the situation in Belgium and in France at this time with the surprisingly sparse references available on the internet.]

The 'national bread' was made from no more than one third wheat flour, with another third rye and the balance made up of maize and rice. It had an extremely hard crust, and most people considered it almost inedible. Many bakeries closed due to the lack of supplies.

In the north, the food shortages started much earlier in the war, and were far worse. The occupying German army removed to Germany what crops had survived the fighting in 1914. By 1915 the bread ration in Lille was 200g per adult per day and 100g per child. There were rumours that the ration would go down to 140g per day for adults and 40g for children, and it did eventually fall to that level.

An extraordinary international food aid programme was masterminded by Herbert Hoover (then a millionaire businessman, later President of the United States), and co-ordinated by diplomats from Britain, the United States, Spain and the Netherlands. They could get food to France and Belgium relatively easily by sea or through neighbouring neutral countries, but once in the occupied war zone, distribution did sometimes become problematic. The negotiations with the German command were continual.

After the war, France found itself responsible for many refugees and immigrant labourers who had been brought in to help keep the country functioning on the domestic front, and chose to stay permanently.

I assume that our property was a graineterie (grain merchant's) at this time, and I would love to find some information on our place at this time and how the proprietors coped with the situation.

*For more on the history of the baguette see Simon's post In Praise of Bread.
**There are still regulations that mean that some types of bread must be sold by weight, others can be sold by the loaf.
Posted by Susan at 10:00

I wonder if "les pouais" isn't just a regional or archaic pronunciation of "les pois" — peas. There was a vowel shift in French back in the 17th and 18th centuries, such that the final syllable of a word like François went from being pronounced [sweh] to [swah]. The same probably happened to "pois", going from [pweh] to [pwah]. But regional dialects are often slower to change than the national language.

And a "miche" is just a round bread, isn't it? Like a "boule". It might be sourdough (pain au levain) or might not. Maybe most of the usual bread in those years was sourdough, made with a "starter" before baker's yeast became widely available.

Ken: you could well be right about pouais, and would know better than me anyway.

My understanding is that although these days you get ordinary round loaves labelled miche, those who write on the subject seem to make the distinction between a miche and a boule tends to be the type of yeast used. I think it may be one of those vague shifting distinctions used amongst bakers who eshew that evil modern rubbish known as bakers yeast to bolster their sense of elitism. :-)

CHM has pointed out to me privately that I am using the term 'occupied' too loosely for many people's taste, so I will add a note to the post. I was careful to use a small 'o' though, not a capital.