No - not the Chateau at Boussay. Nor even the chateau at Bossay (because there isn't one we have found yet).

This is the Chateau la Boussée, which is on a road we have driven down many times without seeing. It is becoming evident to us that the secret to discovering new places is to drive down every road in every season - in both directions. We have driven past this four times last year: with Susan's parents; my uncle and aunt; Adrian, Caroline and Corey; and Susan's sister and brother in law - and yet never seen it, simply because each time we were heading towards Azay-le-Ferron from the Foret de Preuilly. 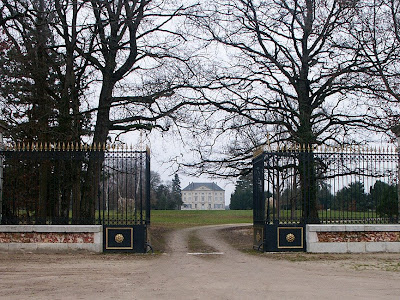 Head away from Azay towards Charnizay, however, and you get a glimpse of the gates. Turn down the road towards le Grand Village, and you are rewarded by this sight. You may even be rewarded with the sight of a wildcat disappearing through a hedge, which Susan thinks she might possibly have seen. 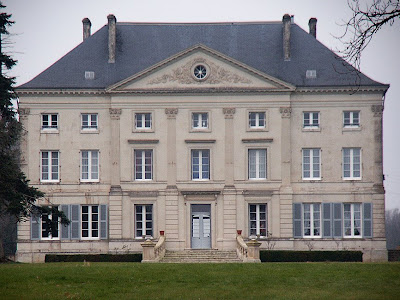 The only thing I can tell you about the chateau is that it was once a Chambre D'Hote (B&B) with fishing but doesn't appear to be one any more. This is yet another place worthy of research.


While Simon was photographing the château, I caught a glimpse of movement. A large tabby cat was trotting along the roadside ditch, then slipped off into the shelter belt of trees. Even though I had a camera in my hands, I reacted too slowly. The reason I would have liked a photo was that this might have been a rare Wild Cat, which are known to be present in the area and may even be increasing in numbers. I had seen pictures of Wild Cats, with their rather short blunt ended fluffy tails and large size. I have also seen feral cats in Australia, which some consider to be a distinct species, long established like the dingo, and not the descendents of European pets gone wild, and this beast was reminiscent of them.

Wild Cats (chat forestier in French) are a native European mammal, and not to be confused with the sort of mange-ridden scrawny feral creature seen in urban back streets and around farmyards. The Brenne is one of the few places in the world where they still exist in the wild as purebred Wild Cats and not as hybrids with domestic cats. I contacted our local wildlife warden and he told me that unfortunately there is no way of telling in the field if what you are seeing is a hybrid or a purebred, no matter how much they look like the real thing. I have added a short note on Wild Cats to our other blog, Loire Valley Nature.

Wow! This is a great blog, I just found you this very moment - I must sign up. I will now spend the rest of my evening enjoying your site.

Hi Jules: you are such an enthusiast :-)

Hi Simon,
I deleted the last post as there were too many spilling mishooks in it... here is the revised version.

I got a glimpse of a possible wild cat at La Forge. We get plenty of ferals [there is a lady at Favier who feeds them] but this was in our meadow and behaving very diferently.
Had the right markings, correct tail... all I got was a shot of the tail as it slunk off. This was 3rd November 2003

Tim: sadly, outside of the Brenne you've got no real chance of a Wild Cat, just strongly adapted ferals. Let's hope the lady who feeds the local ferals is there all year, and not creating a boom and bust situation for the poor creatures. Feeding them is only half the solution anyway. I also hope that she is in touch with a Trap Neuter and Return Programme to manage their numbers, but fear it is unlikely.