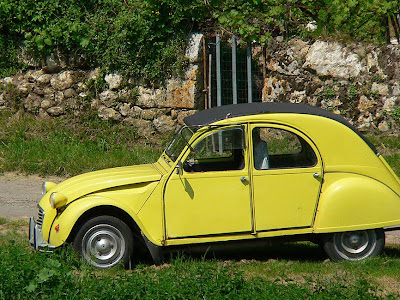 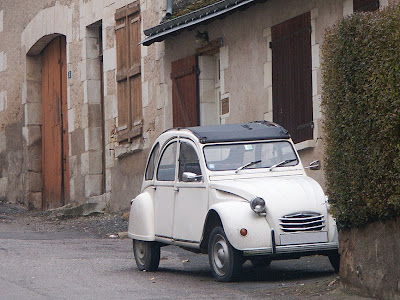 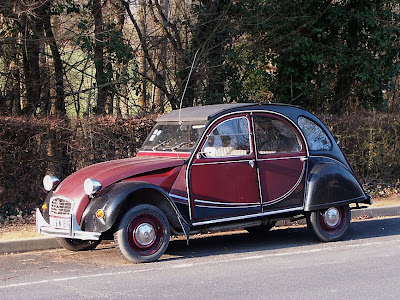 Or eight if you include this.

This is the classic Citroen 2cv. Road Tax in France is levied depending on the tax horsepower rating, which is a calculation made on engine capacity, not power. The 2cv has two chevaux vapeur - that is 2 steam horses. It is the car that put France properly on the road in 1948, and it stayed in production until 1990. In total 3,872,583 of them were made.

The design brief was simple: it should be able to ....
well - I will let the shaggy bloke in the video explain it
(that makes 10 horses so far)

According to one source, "Citroen was so confident in the 2CV's abilities that it offered the prize of a brand new car to the first person who rolled one on to its roof - and well over half a century later, the prize still hasn't been claimed." If you have ever followed one down the road you may doubt this - they are the leaniest cars I have ever seen.

(The video is not the right aspect, I know - but it was loaded to you-tube by someone other than me)
Posted by Simon at 10:00

I have always loved these cars. the suspension on them was totally weird. On mountain curves the front almost touches the ground. The seats were also something else...a form of deck chair

If you ever go to St Pierre de Maille there is a 2CV that parks by the mill. Its canvas sling seat has collapsed, and has been replaced by a couple of pizza cartons. Next time, if I am there and no-one is watching, I will get photograic evidence

Hi Simon, you've got me worried now. I know we used to pay car tax according to horse power, but wasn't it abolished altogether a while back? I hope so cos I've been away from France more often than not these past 24 months, and I haven't had a tax disc for years now! I'm going to be staring at windscreens when I drive into town later, your fault if I have an accident!

You do pay car tax (a goverment actually abolishing a tax? Il n'est pas possible!)- just that you do it by default (and by another name) when you pay for your Carte Grise. It is even still worked out on your car's CV rating. I think the theory is that as you have to show your Carte Grise to the insurance company before you insure, the insurance label will cover you. Otherwise you would have so many lables on your windscreen you wouldn't be able to see through them.

Then when you're pulled over by the police (in Preuilly they set up on the bridge about once a month) they check your CT sticker, the Insurance sticker - and then ask for the Carte Grise and your Permis de Conduire. I haven't been stopped since the new laws came in, but they probably also ask to see your hi-vis and triangle as well.

Ah - think I understand. You mean you kind of pay in advance when you buy a (new) car?

I'm ok on fluorescent jacket and triangle, but I've not been stopped for a while now. I do like the way they occasionally random breathalise people, although I've no idea how effective it's been wrt drink driving stats.

We had a 2CV when we were first married. My wife loved it as it was the only car she could drive when pregnant and the baby was pressing on a nerve. I remember having to adapt my driving style: to overtake, one had to hold back, then wind the power and speed up about 30 secs before actually pulling out and passing the car in front! Happy days!

I wish I still had mine. I loved it. It was a wonderful car, so simple, so easy to drive, so comfortable, so... and so on and so on...
Word verification is shiesan, sounds Japanese

All these people tqalking about how good the 2cv is aren't helping :¬)

Certain people (well - a certain person, anyway) won't let me have one...

You used to have to buy a little sticker called La Vignette for your car windshield every year in France. When I bought my car in 2003, I asked about that at the Garage Danger, where I bought it. The man sort of chuckled and said it had been years since you'd had to pay a yearly fee to keep your car on the road. And the Carte Grise, which is good indefinitely, was only about 100 euros.

CHM: How on earth did you fold yourself into a C2V?

It was more roomy than you would think.

We now have a NEW president. Delivered a mighty and wonderful speech!

Susan, are you watching this? Roomy, the man says, and the other man says spacious.

This is what I need in a ar.

If you two get a 2CV, I am going to be one very jealous individual. Go for it!

Simon, delete my earlier comment with the stupid typo, please.

Word verification is horatort. Is blogger talking about Obama?