Moving to a country where one doesn't speak the language throws up all sorts of issues. Some of these are important (like "how do you call an ambulance in an emergency") and some are just curiousities that one runs into every day.

One of the latter is "what does faubourg mean". There are many streets called "rue de du faubourg" something, usually leading into a rue of the same name. One example is the rue de du Faubourg St Nicolas in Preuilly sur Claise. 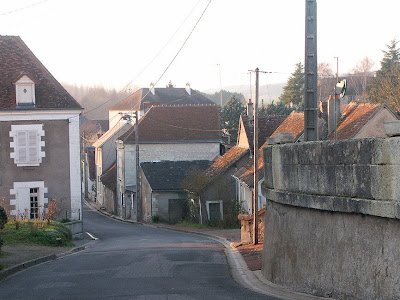 Wikipedia expalins it well:
Faubourg is an ancient French term approximating "suburb" (now generally termed banlieue). The earliest form is Forsbourg, derived from Latin foris, 'out of', and Vulgur Latin (originally Germanic) burgum, 'town' or 'fortress'. Traditionally, this name was given to an agglomeration forming around a throughway leading outwards from a city gate, and usually took the name of the same thoroughfare within the city.

So that is one mystery solved.


"Du" means "of the" as in the street of the St-Nicolas Faubourg in Preuilly. I looked at the Google map of Preuilly and it sure enough says rue du Faubourg St-Nicolas.

:¬) and just after I was crowing at picking up one of Susan's spelling mistakes...

It's not clear what the word "faubourg" really means. In Paris you have a rue St. Honoré whose outside extension is rue du Faubourg St. Honoré, where the British embassy is located.
But where is that faubourg St. Honoré where both streets are supposed to lead you? I haven't the slightest idea. There is no suburb of that name, that I know of.
When in Paris, I live on a street that is an extension of rue de Sèvres. This extension has been given a different name over the years, but if you keep going west, you eventually get to Sèvres, which is now a suburb of Paris. I had never heard of a rue du faubourg de Sèvres. Go figure!
I suppose, in the case of rue St. Honoré, that it was the main street in the neighborhood called St. Honoré. Then when it was extended the street got the name of faubourg because it meant it was extended in a "false" "neighborhood" i.e. faux-bourg. That's my own explanation, how good is it.......?

Here's what the French Robert dictionary says about the etymology of the word faubourg:

There must have been a faubourg, an outer town or neighborhood called Faubourg St-Honoré, just as there was a Faubourg St-Germain. These neighborhoods or suburbs were outside the old city -- outside the walls. The de in rue de Sèvres must have some grammatical or semantic significance. It's not the rue de St-Honoré...

My verification word is grammen.

My "fake town" is looking better and better!

It's not often that logic works in dealing with French in Eglish...