No, we haven't had it moved in as a garden feature!

The photo in our title piece was taken by Susan in 2006 while I was in Loches with Bryan. At the time she was on holiday in the Northern Territory with her parents. The green and gold have been Australia's official colours since April 19, 1984.

The first recorded French presence in Australia was the expedition of Jean-François de Galaup, comte de La Pérouse, who arrived in Botany Bay on this day in 1788 at the same time as Captain Phillip was moving the first fleet to Port Jackson (the proper name of Sydney Harbour) to found the first European settlement in Australia. He is remembered by a suburb bearing his name which overlooks Frenchman's Bay, part of Botany Bay. Also at la Perouse is Bare Island Fort, which I remember as being one of the first places I ever went to on an outing with my family in Australia after we arrived in 1967. It was extremely hot (it was probably midwinter, but we had just arrived from an English Spring...) and we caught the bus down there, which took HOURS. Then I remember being singularly unimpressed with the fort, because being a London boy I was expecting the Tower of London, if not better. The only thing that redeemed the trip was the fact we went past the Rose Bay Flying Boat Base. Kids, eh?
A completely gratuitous photo of Sydney. Go under the bridge,
and on the right is Camp Cove, where the colony was founded. 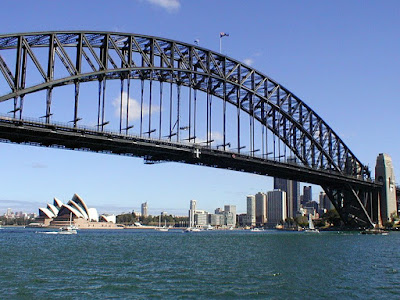 For most Australians, the closest ties with France date from World War One, when the Australians served in the carnage that was the Western Front. After that war a number of ex-servicemen stayed on in France, and Paris became first choice for Australian artists, most notably Will Ashton and Rupert Bunney.

Since then, French/Australian relationships have been pretty good - if sometimes strained. The most notable strain was caused by the nuclear testing at Mururoa Atoll between 1966 and 1996, which I remember being heavily demonstrated against.

Overall though, the French presence in Australia is fairly small, although there are 31 Alliance Française groups spread across the country.

Officially 5,500 Australians live in France. We hope soon to make that 2 more...

My parents emailed to say that my knowledge of Australia history is somewhat lacking - there were at least 3 French visits to Australia before La Pérouse:
In my defence I have to say that when I went to school we were taught that Captain Cook invented Australia. People like William Dampier and Dirk Hartog were hardly mentioned, and all we knew about Abel Tasman is that he discovered Tasmania and completely missed seeing the Australian Mainland.
Posted by Simon at 01:00

Thanks for today's post, Simon. As a matter of interest and comparison, do you know how many Australians live in London? Clearly there are soon to be two less.

Thanks also for usual super links, including the various Flying Boat links, one of which led to 'Beachcomber' an aircraft which spent some time within a mile of where we live on the former RNAS Daedalus airbase.

John.
Apparently, between 200,000 and 300,000 Australians in London. How many are here long term I dont know. At any one time about 5% of Australia's population lives overseas.

Glad you enjoyed the links - I think I can remember seeing the flying boats taking off, but maybe that is only wishful thinking

La Niortaise
And to you in Niort. Got the Barby going?

Happy Australia Day to you and Susan, and to all the other Australian living in France. They're all welcome.

I wish! Did play 'Advance Australia Fair' today for all my classes, but that was about the limit of celebrations!

Good point. Thankfully we haven't enough time to do 'cultural' lessons in my semester's classtime allowance, so I just played it quickly for a taste and no lyrics. Then had to get on with my teaching.