Truffles are not the only Fruit

Susan wrote in January about our experience buying a black truffle at the Marigny-Marmande truffle fair and cooking with it. Alongside the main hall in which the truffles are sold, a large marquee is erected and filled with other local and almost local produce. For a carnivore this is (literally) hog heaven. 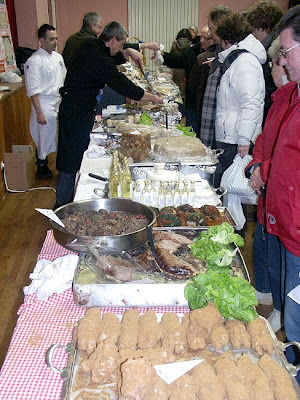 In the above photo you can see various local delicacies including crumbed pigs trotters (pig feet for you Southerners), Farci Poitevin (a whole cabbage stuffed with pork and sorrel pâte and simmered for hours in court bouillion), assorted pâtes and rillettes. The round pan beyond the trotters is a civet de sanglier. A civet is a game stew (in this case wild boar) traditionally made by hunters in the field, using the blood of the animal to thicken the sauce. These days they are mostly made with red wine and perhaps some minced chicken liver to give a taste and mouthfeel reminiscent of the traditional recipe. The same stall also sells boudin blanc and boudin noir in both natural and truffle laced states. (Taste bud alert!)
Boudin 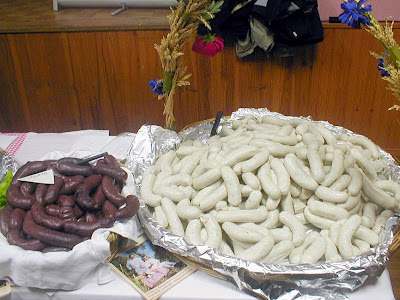 There is also ham and other cured cuts of pork including bellies, which sliced thinly could make really interesting streaky bacon (I have my taste buds really excited now...) Alongside them are sold any number of varieties of saucisson sec (think French salami) including wild boar, deer, and smoked duck. We took a photo of these last year. 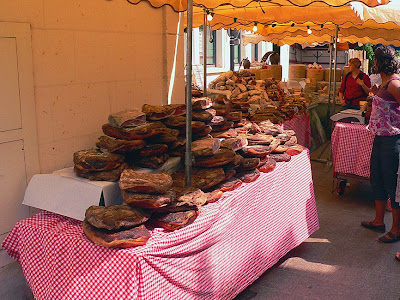 Just as truffles are not the only fruit, nor is pork the only meat. We were surprised by how much biche (venison – specifically hind ie female Red Deer) there was on sale. I am not sure how you cook a whole front leg of deer - I assume you roast it in a big oven or maybe on a spit over charcoal. (Taste buds have been set off again) 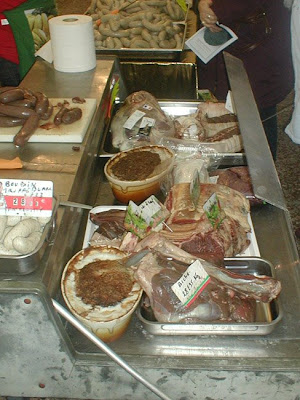 If you're not into meat there is usually a range of breads, dried fruits and jams. And, of course, truffles. The attractive photo below is of brioche and Tourteau Fromagé (literally a cheese crab), a kind of brioche made with goats cheese and cooked really hot at first so the top "burns". Clotilde has written about it on Chocolate & Zucchini. I really like it - Susan isn't convinced. Like the Farci Poitevin, it too is a very local regional dish. 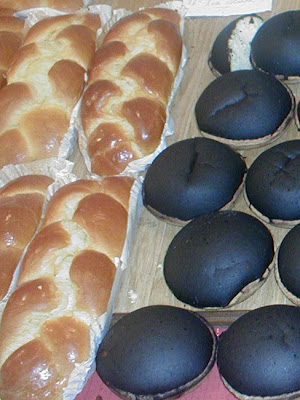 There is also usually a stall selling snails. I can't work out if snails are meat or not, so I won't mention them. Taste buds are now back to normal, by the way.

Snails fall into the fish category, and they can be eaten by devout Catholics on Fridays, when meat is verboten. Snail are cold-blooded, like fish (and frogs).

Ken:
Coypu, beavers and capybara are fish as well. This makes Friday dinner an interesting mélange.

Just like the US Supreme Court decided that tomatoes were not a fruit but a vegetable, you can be sure the Catholic Church will twist everything to fit their needs. I'm surprised the Pope didn't decree that duck was fish since it swims in and on water.
How about having cold-blooded murderers for lunch on Fridays and for Lent. Would that be fish? A little fishy, don't you think?

Hi Susan & Simon, I am so happy over here on your blog...your commenter's are cool too.

Susan and Simon, I would like to become one of your followers but I can't get it to work. I don't understand why. When I click on 'Follow this blog' I get a new blogger tab that is empty...

My word verification string is fulit.

Youre not the only one who cant do the following thing. DJ managed it yesterday...

Hi Ken,
I suppose your browser is Firefox. Then you have the same problem that I have.
I tried to click on Follow this blog with Safari and it worked. After that I tried the same thing with Firefox and it didn't work.
For some reason I cannot either see the verification word in Firefox. I explained that in a comment on Walt's blog. On the other hand, Safari doesn't download the full pictures and sometime not at all. So I have to navigate from one browser to the other depending of what I want to do.
Is that the beauty of electronics?

I have manually coded a link for following the blog. I hope it works

I can follow other people's blogs. I'll try the coded link, Simon, and see what happens. Except here, I don't have any problems with Firefox, CHM. Do you have the latest Firefox version for the Mac?