When we drive to the truffle Fair at Marigny Marmande we pass through les Ormes (which translates as "the Elms"), which appears on the map to be a fairly unremarkable town on a Route Nationale. It does have a chateau (which can't be seen from the road but is open to the public) and the most remarkably HUGE "Poste aux Chevaux" we have seen. 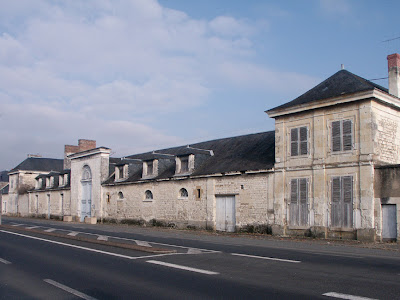 The only information I have managed to glean from the internet is this:

The family-run Post House at Ormes is listed as a Historical Monument. Inaugurated in 1764 by Count Argenson, the Post House at Ormes is considered as one of the most remarkable in France for its size as well as its architecture. Vast with approximately 70 metres on one side, the site corresponds to the plan of a typical Post House : majestic entrance on a driveway leading to a vast courtyard around which are located the buildings, the saddlery and the coachman's house; on the left and right of the courtyard, living quarters and hotel business, the large stables and the two smaller ones. The roof of the large stables holds the feed for the horses. In the centre of the courtyard stands a huge basin for water to refresh or bath the horses. The courtyard and stables are open for visits.

The gate to the Poste aux Chevaux Next door is what appears to be another stable type building - and this is perhaps even more astonishing (maybe just because it has been beautifully restored/maintained). I suspect it is something to do with the chateau, which is just across the road, but I just cannot find out with the meagre resources I have at hand . Here it is though 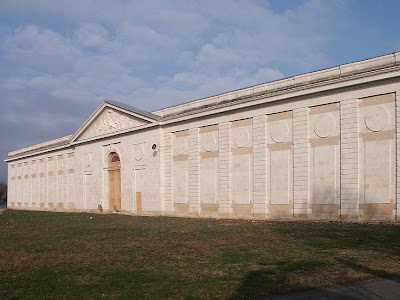 When we visit here next time it won't be midwinter (can you believe that sky - no photoshop trickery, it really was like that) and we will get some more information and report back. The poste aux Chevaux is open in July and August and I think Susan will demand a visit. 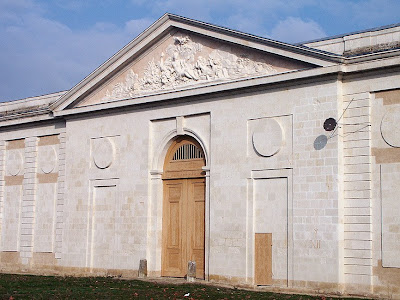 The sundial said it was just gone 13.15 (1.30pm) when were were there taking the photo, as confirmed by the clock in the car. 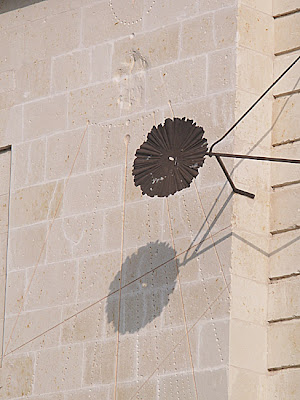 The Town of Les Ormes reminded us a lot of places in Australia like Moree and Coonabarabran - a big wide main thoroughfare through a small town built just to service the route. Once transport became motorised these town really suffered - if they were lucky they became railway towns, but otherwise they are slightly deplapidated and full of faded glory.

What a fascinating building Simon. I bet is was a real hub of activity in the golden era.

It reminds me of the garrison towns of Bordon and Aldershot where I lived before moving to France.

Once grand buildings built by the finest but now sadly with no real use other than historical attractions.

Hi Phil: Yes, I can see why these remind you of military barracks and stores. It's the great length of building with the sort of spare functionality that indicates well built but for a serious purpose.

Sadly, it can be extremely difficult to sensitively and appropriately reuse these sorts of buildings. They often don't have enough existing openings to allow good natural light, for instance, and it is impossible to punch holes in the walls for more windows without ruining the building.

I live in Les Ormes and can confirm that the building is indeed something to do with the chateau - but it is a folly! Behind it are large barns which the village use for the bi-annual 18th century fair where we all congregate for dinner in the evening. Why such a smart facade then? Well, it was built so that visitors leaving the chateau had something nice to look at rather than tatty barns! As for the Poste aux Chevaux, I can add more information if you're interested as I recently translated the info leaflet for the owners. Hope you enjoy your next visit. Nicki

Nicki: Many thanks indeed for your info! I have PM'd you. We are very impressed by your website btw.