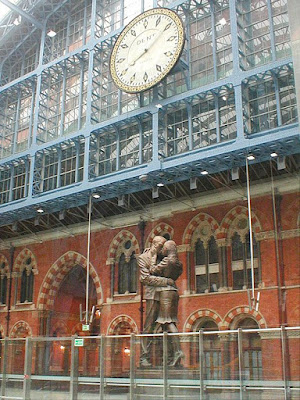 au revoir
Most of you will know that this is 'goodbye' in French (more literally, it means something like 'until we see each other again', voir being the verb 'to see').
Many people contract au revoir when speaking to something that sounds more like 'oh-vwar', but it is not unusual in the Touraine to hear someone give it the full Edith Piaf treatment – 'oh rrrrrrrevwwaarrrrrrrah'. Curiously, this method of delivery is particularly common amongst female motorway toll booth cashiers. That's right, you do not just hand over your toll (which can be anything from 90c to €26.50, depending on where you are). You greet one another with bonjour, you say violà when you hand over the money, the cashier says merci, then when you are handed your receipt you salute one another again with a chorus of merci, bonne journée, au revoir. The same routine is performed with supermarket cashiers and indeed any shopping transaction. It is important to bid your fellow shoppers bonjour and au revoir in a general salute as you enter and leave the shop too, whether you know them or not.

In other situations there are other ways of saying goodbye:
Susan
Posted by Susan at 10:00

One we missed here is "m'sieur-dame", which is used when it's a mixed group you're greeting.

I always forget to say it, too. It's usually used when passing someone on the street (ours is a hilly street - breath saving maybe?)

In the Loiret, everyone says "bon soir" even though it's only 2pm! As if we were going straight to bed.
And, as Simon said, the "m'sieur, dame" is obligatoire.

ah.. the mysterious jour/soir boundary. One that confuses me: I think Soir starts earlier as you get older...

"Adieu" to me means a complete and final farewell: either one of you is about to cough your melodramatic last, or one of you is telling the other "It's not you, it's me".

Another we hear a lot here in the Touraine is "à plus," or "see you later." Most informally, of course.

The shifting of those two expressions, bonjour et bonsoir is very interesting.
Originally, bonjour was used as good day in English, i.e. you said it also when you parted with somebody, even in the afternoon. Now that has been replaced by bonne journée which use in this sense is broader and somewhat recent. Now, bonjour is used as a somewhat extended good morning when you greet somebody even in the afternoon.
As for bonsoir, it was used as bonjour when you greeted somebody sometime in the afternoon and when you parted with them. Now bonsoir is only used, interchangeably with au revoir, when you part with somebody, no matter what time of day it is.
Bonsoir and au revoir are used as good bye.
Bonne soirée would be used from the mid-afternoon hours on.
Bonne nuit, is used only when someone is going to bed.

Autolycus is right about adieu. It is "a complete and final farewell."

Thanks for reliable info on adieu. I had read this interpretation of it before, but was not convinced it wasn't over sentimentalised and romantic.

A + – another one I forgot. You get that a lot on emails and online forums.

CHM – Thanks for the stuff on bonjour / bonsoir.

Thanks for the info! I find it very odd that when people enter a waiting room at the doctor's office they all announce "bonjour/soir" to the group when then enter or leave. BUT - they NEVER talk to anyone. Just the whole "Hello you people waiting here in this room" then a "Goodbye to all of you that I did not speak to." Why say hello or goodbye at all if you are going to refuse to even make eye contact?

Having been away from France for nearly forty years the expression A+ is new to me. That's text messaging.
A plus tard has been in use for many years, but it was not as widespread as bonsoir or au revoir.
That brigs me to the ubiquitous plus. Depending on the way it is pronounced it means more or none at all.
If the s is voiced, then it means more.
If the s is silent, then it means none or the like.
If you say j'en veux plus [voiced s], it means I want some more.
je n'en veux plus [silent s], means I don't want any more.

To tell the truth, I have no idea why the S is silent in A plus tard, when it's a comparative meaning later. Probably a matter of euphony.

Hi Susan in Lille,
In the old days people used to enter a waiting room or the like and no say anything at all. People just sat there silent until it was their turn. Didn't utter a word when leaving.
I'm almost shocked and amazed at how pleasant French people have become in the last fifty years! They're not the same!
Is it due to people traveling more or looking at TV. Whatever the reason it is a BIG improvement.

Hello again Susan in Lille,
French people have a very high and acute sense of privacy. They don't want nosy people to ask them the very questions that American people would no doubt ask in the same environment. I do know very nosy French people as well.

I think you are right, I think it's a move toward becoming a more friendly culture. I remember I was shocked when it first happened. I thought "oh wow! Someone spoke to me!" even though it was not really to me, but I still had to smile a little. :-)

Oh - and I now the idea of no eye contact in a doctor's waiting room makes sense. No "so, I have this rash thing. What about you?" type of statements.

You won't believe it : SCREWED!

You're right, we have noticed this exaggerated pronunciation of "au revoir" that we get in the South Loire region. It's from everyone from the lovely lady in the Grand Ma Restaurant in Grand Pressigny to the supermarket checkout girl in Super U in Descartes. It's very attractive and friendly, we think. Just one more reason to love the place.

As for plus, the s is always silent when the word is an adverb preceding an adjective and means more, as in plus tard (later). It's only when it is in a stressed position, at the end of a sentence (j'en veux plus) or phrase, and is not followed by an adjective, that the s is voiced.

In Saint-Aignan, it is not unusual for people you've never seen before to make eye contact with you on the street and say bonjour to you.

"Adieu" is not necessarily "a complete and final farewell" !!!
In some areas of France, such as Savoie (Northern Alps), or Bresse (North-East of Lyon), it is used as "bonsoir", when leaving somebody at the end of the day.
I must admit it's quite surprising when you hear this for the 1st time ;-)