Rabbit is a very popular meat in France, and rabbits for meat are raised both commercially and in ordinary backyards. Wild rabbit is also available during the winter hunting season if you know someone with a hunting licence.

Rabbit hutches in an abandoned farmyard 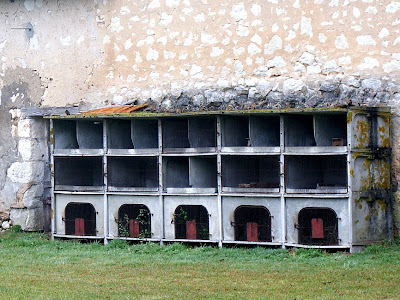 Rabbit meat is not cheap. I was lucky enough to pick up two cuisses (thighs) reduced to half price recently in the supermarket. The label told me that the rabbit was born and raised in France, and the thighs weighed 464g in total, originally priced at €7.48, reduced to €3.80. The label further informed me that the rabbit was guaranteed to have only been fed vegetable and mineral material. The brand name it was being sold under was Le Volailler (The Poultry Merchant). Rabbit is typically sold on poultry stalls in the markets, but you can often get it from the butcher or game merchant as well. 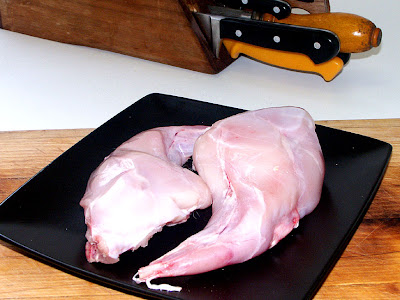 I decided to serve it using my version of a French recipe, Lapin moutarde à la crème. Since I don't think mustard actually goes terribly well with anything except fish, I did my usual trick of substituting cumin, so here is my recipe below, based on a recipe in Hugh Fearnley-Whittingstall's Meat:

I would rate this dish in my current top 20 favourite main courses. The sauce is piquante, savoury and delicious, the rabbit tender and moist, the vegetables retain their vibrant colours. Simon, who is not a fan of white meat, (nor of rabbit in particular, for more socio-cultural reasons) was less impressed.

Sounds interesting, but I'd have to make it with mustard instead of cumin and lardons fumés instead of saucisson. I'd also use white wine, since I'm in Touraine, and not cider, which is Norman. With the mustard, I wouldn't add the gelée de pommes. I guess I'm a traditionalist when it comes to classic French recipes.

But it sounds like I would enjoy your version more than maybe Simon does. Walt and I always cook a rabbit on Easter. I can't remember now what recipe we have settled on for this coming Easter. Last year we made a rabbit in a Thai curry sauce, with coconut milk.

My word verification string is bleatica, which makes me think of mutton, not rabbit.

The recipe does sound good, and Lapin à la moutarde de dijon is a classic.

We're going to try a tajine of rabbit this year (a spicy stew).

Ken ate the easter rabbit. Now we know who to blame for the lack of chocolate eggs last year