The Border at Descartes

Twenty kilometres (twelve miles) from Preuilly sur Claise is the town of Descartes. I first went there with my mate Bryan when we were looking at houses in 2006, to have lunch and to be told that there was nothing in my price range and I was being unrealistic.

Since then I have been to Descartes a number of times, once to try and sort out my electricity, and once with Susan to try find an internet cafe when we were trying to transfer the car to our name. We have also driven through a number of times, but we have never stopped to have a look around because we are always on a mission when we head that way. 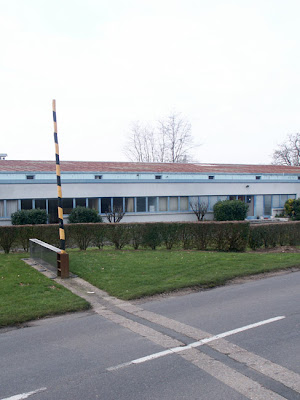 We still haven't stopped in Descartes and had a proper look around (we are told there is a good Moroccan restaurant in Descartes that used to be in Preuilly), but on the way back to Preuilly one day I did stop the car long enough to have a look at what looks like a defunct railway crossing that I had noticed but never really looked at on the road into Descartes.

It turns out it is the barrier that Barbara mention in a comment on our post about the bridge at la Guerche. So here is where the border between German Occupied France and "la Zone Libre" used to be between 15th December 1940 and 11 November 1942, the date the Germans effectively took full control of all France. 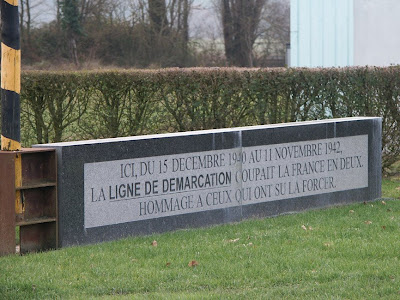 I know the inscription on the stonework looks huge (and it is), but my defence for not seeing it is that I am always driving, and although we have driven into Descartes along this road, I don't think we have ever driven out of town this way and the inscription faces the town.

Footnote: Researching this post I found an interesting note on Wikipedia - "Australia maintained, until the end of the war, full diplomatic relations with the Vichy Regime." This amazes me. 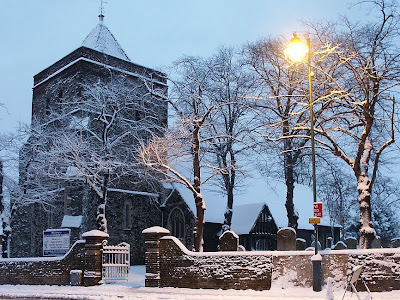 This is what we woke up to today. Our trains are still running*, but the buses in central London and a fair slice of the underground aren't. Susan is going to work dressed in homage to Scott of the Antarctic, and I am staying indoors with the internet researching aqua-thermal heating. (*Susan has just got back from the station saying our trains aren't running now, so she is going to try again in a hour.)

Update: Susan got to work, but was the only person in her office to do so. As it is still snowing, she came home early. It looks pretty, but snow is for looking at, not for walking in
Posted by Simon at 16:00

I can say that every time that hubby & I come towards Chuamussay, we pass through this symbolic point.
It gives me shivers thinking about all the people who crossed North to South, in hopes of safety.

We have snow also this morning near Paris ! Météo France issued an "alerte orange" for the Northern part of the country, and yes, la Touraine must be snowed down a bit too.

Is Wikipedia right about that? If true, I can see that it might have proved a usefully deniable back-channel for the Allies, but the whole history of the different British and American attitudes to both Vichy and de Gaulle is so confused and murky, maybe it wouldn't...

I fear that this documnet is as clear as mud in the issue. I think I might have been a case of "if in doubt, do nothing".

No snow in Saint-Aignan today, but there was some ice on fences, wires, and tree limbs this morning. It's afternoon now, and above freezing. It is still raining. We will see what sub-freezing temperatures predicted for tomorrow monring will bring.

The Decartes Museum is worth visiting.

Thanks Jim – another one for our list of places to visit.