Last Saturday, as we have done for the previous couple of years on the third Saturday in February, we dined at l'Image, to partake of Jean-Michel's special Saffon Menu. 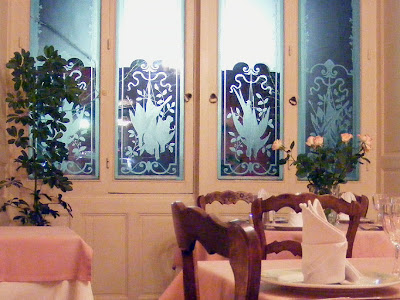 As usual, we had booked for earlier than the locals, so as no one else was in the restaurant, we had a drink at the bar and a chat with Christophe. We were introduced to the man who came in soon after us and we all stood around discussing politics, as is proper in France.

The man we were introduced to turned out to be Eric Morin, the photographer, who owns an old building just outside the town. We had heard of him (indeed, we own one of his books, The French Café, which features a picture of a priest paying his bill at l'Image) so it was very nice to meet him. He has done quite a bit of work for the UK magazine World of Interiors, and we have friends who have featured in this magazine, so that gave us another thread of conversation. The 'bon vivant, patron of the arts and author', Alistair McAlpine, as Wikipedia describes him, was another link. Eric described him as très sympa. Alistair McAlpine used to write a column for World of Interiors and at one time had an outstanding collection of Australian outback vernacular furniture. (Most British people will probably just remember him as the Treasurer of the Conservative Party in Margaret Thatcher's day.)

Somehow we got on to the subject of les truffes, and Eric asked if we knew the Truffle Market at Marigny-Marmande. He had bought 3 small truffles there this year, so we were able to compare notes. One of his truffles had been a success, but like us, he found that the other two had good aroma, but it didn't translate into taste. He didn't know why they were such poor quality this year. He also told us a story about a local truffle hunter who had a plantation just coming to the age where it was producing good quantities of fine truffles, but the land is part of the planned route for the new TGV rail line from Tours to Bordeaux, which would effectively disinherit the man's son as truffles are a very long term crop. Christophe reckons the Marigny-Marmande area harvested 20 tonnes of truffles last season. (Later I looked up the figures and according to one source, two seasons ago the harvest for Indre et Loire was 35 tonnes. There does seem to be some ambiguity about the size of the truffle harvest, but according to the same source, in 1900, without the aid of modern innoculation techniques, the natural harvest was 1000 tonnes!)
Jean-Michel emerged from the kitchen, as we weren't giving him anything to do, and joined in the chat (much discussion about the various activities of the new local Council, around the swimming pool improvements and new housing blocks available on the river there, as well as the upgrading of the street that leads to Jean-Michel's one day to be finished house).
Christophe teased Eric about his facial hair, which apparently has been re-sculpted every time they meet. Simon teased Jean-Michel about appearing in the Nouvelle Republique (talking about how the restaurant was going in the current economic climate and what his expections were for the coming year – he says in the season, half the customers in the restaurant are English, but they won't know until May if the English will be back this year). Eric teased Jean-Michel too and addressed him as Monsieur Safran.
Jean-Michel asked Eric if he had seen our blog and when Eric said he hadn't, J-M fetched a printout of my post about cooking his carp recipe! He had auto-translated it into French so he could read it and told us he was particularly interested to learn about the traditions surrounding the fish in the Czech Republic and Slovakia.
Eventually we moved into the restaurant, after a party of 11 had settled themselves in to lively and very noisy multi-generational French family discussion. In the end, this group, us and another group of 9 who arrived not long before we left, were the only tables occupied, but Christophe told us that they had done 80 covers at lunchtime, and were turning people away, so they were happy. Also, after service finished they were all on two weeks holiday. 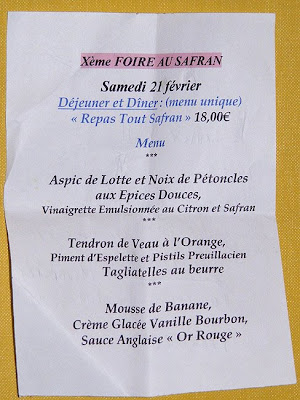 Every year Jean-Michel dreams up creative things to do with saffron for all 3 courses, and this year the menu was:
Monkfish and scallops in aspic with sweet spices, dressed with lemon and saffron vinaigrette
*****
Veal breast in orange sauce with Espelette pepper and Preuilly saffron strands served with buttered tagliatelle
*****
Banana mousse with Bourbon vanilla icecream and 'red-gold' custard
While we are in the restaurant we have a chance to chat a little with Martine if she is not too busy. Luckily, between main and dessert she had time to talk and told us how pleased they were with their new staircase in the house she and Jean-Michel have just built. Because the space the staircase was to go into was unusually wide and not standard, several local artisans said they could not even quote to do the job, because they could not just crunch the numbers through their computer programme. Finally, she and J-M found a menuisier from Tournon who quoted in the old-fashioned way and has done an excellent job of the finished staircase. Martine told us how much they had paid and it compared favourably with the one quote we have for our staircase so far. Needless to say, we will be hot-footing it over to Tournon in the near future to visit M. Brunet.
Susan
Posted by Susan at 10:00

Email ThisBlogThis!Share to TwitterShare to FacebookShare to Pinterest
Labels: Food and Drink, Markets, Our house in Preuilly, Pictures of Preuilly, Towns and Villages near Preuilly

I'm sure it was as good as it looks on the menu! And monkfish is one of my favorites.

"unusually wide and not standard, several local artisans said they could not even quote to do the job, because they could not just crunch the numbers through their computer programme"....

Yup, as Pauline and I thought...

And yet, you and we had our staircases made by the same company. We had an outstandingly good experience, whilst I think that you have reservations. Perhaps because we wanted a copy of what had been there before, and despite the horrendous distortion of our stairwell, it was a challenge, but they knew how to deal with it. You on the other hand wanted something that is not standard for France.

Susan...
Like your friends, our stairwell is much wider..
it was our eventual intention to fit a stairlift...
this may of course now be sooner than eventually!!
There are plenty of "programmes" that do straight rises...
I've got one... LaPeyre do them... and the staircases come ready to fit...
No...we wanted something of the quality of build that they did our oak doors in the longère.
However, the quality of every bit of their woodwork in this building is just not to the same standard as those three oak doors!
Shame really....