There is an Hotel de l'Esperance in many towns. Ours is run by the formidable Jeanine and has a loyal following of regulars. When we were having our roof replaced Stanik and Janik ate there every day.

Because we were only in Preuilly for a few days, and were focusing of renovation work (for once!) we decided it was probably easier to lunch with the other workers and went to l'Esperance.
The remains of lunch – a typical table at
l'Esperance by 14.00h on a weekday 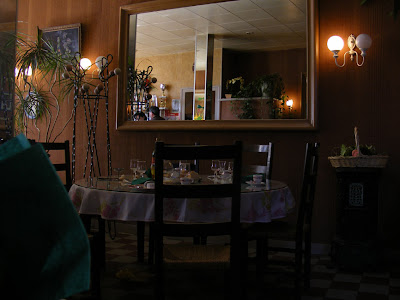 Turns out our neighbour Sylvie was making her debut there as a waitress. Pierre-Yves, her husband was in there too, lunching with a couple of other men. This gave us the opportunity to let them know we didn't have any water in the house (again) and admit that we had gone over to their place the night before and helped ourselves from their laundry while they were out.

As the only 'Anglos' in the place, we provided the theme for the lunchtime conversation throughout. I overheard various discussions of who does and does not speak English, and which of the expats in the community, both British and American, speak extremely good French. When sometimes I didn't hear what Sylvie had said, or didn't quite understand, someone (a complete stranger) from one of the other tables took it upon himself to chip in with a translation. Of course these diners find non-fluent French speakers a reliable source of entertainment, but it is also perfectly normal in these situations for inter-table conversations to be held, and certainly all present greet everyone else in the room on arrival.

Jeanine and Sylvie at the bar, whilst a
couple of regulars prop up their side 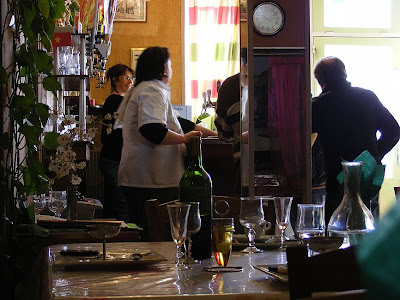 The food was the usual no choice menu (except between viande or poisson for the main course). It was all tasty and very French. A bottle of red wine was already sitting on the table, opened, to indicate that it is a refilled bottle of house wine. Sylvie delivered a carafe of tap water and a basket of baguette slices. First course was a sort of bean and vegetable pate served with tuna stuffed hard-boiled eggs all garnished with the sieved yokes of the eggs. Sylvie described it as lègere, although I'm not sure I consider anything with an egg and a half and a generous serving of vegetable pate as 'light'.

We remembered to lay our cutlery back down on the table once we had finished, as it is normal in these sorts of restaurants for diners to eat their entrée and main with the same knife and fork. We chose fish for the main, and it came as a piece of white fish, rolled and poached and served with rice and a white wine and tomato sauce. Sylvie warned us 'Attention ! Les arêtes !' ('Watch out! Fishbones!').

Then there was a selection of three cheeses – a camembert, individually wrapped Kiri and Ste Maure de Touraine. This is served on a plate that is moved from table to table as people are ready for the cheese course. Dessert was semoule (semolina),which Sylvie recommended as very good, and indeed it was. The serving was small, as one just needs a couple of mouthfuls of sweetness to finish off the meal. All this is included in the prix fixe of 11€. We had coffee too, which is another couple of euros.

At the end of the meal we caused more entertainment, as I tried to pay by bank card, which Jeanine does not take. I only had 10€ on me, so I said would have to go to the bank and return to pay. Jeanine did not seem in the least put out by this, just amused.

If you're looking for an every day French experience, l'Esperance is the sort of restaurant / bar you need to visit. If you feel like practicing your French, there is always someone willing to chat - you may get teased, but if you reciprocate it is appreciated; and if you're wanting a quiet (often brightly coloured) drink, there is always a quiet corner.