A lovely pair of knockers

As if I didn't already have enough to think about, the matter of door furniture raised its ugly head the other day as we were walking down the street.

We saw this cute little beast on a doorway near Jill and John's house, and were quite taken by it. 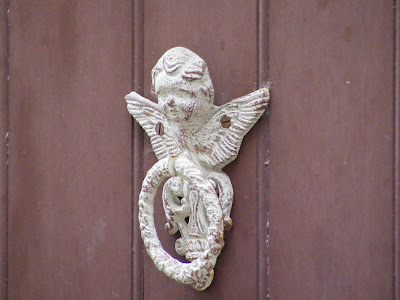 There is an alternate model to be considered, however. It's a bit weird, but for some reason I like the "dead lady's hand holding an apple" knocker. 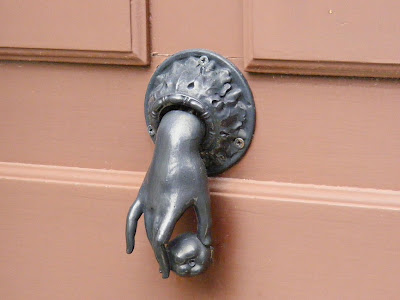 We will need a knocker, but which one?? Cute or weird?? I think I know which way this one is likely to go...

I am looking for the "wide eyed and innocent" smiley.....

Keep looking for the perfect door knocker, you'll find one that is just your style!

The sheer variety and diversity of knockers is one of the great joys of life.

There again, following instructions from The Wife, we've invested in a rather cute cast iron bell with birds on top and a string for visitors to waggle!

I watch Cuisine TV a lot. One program, hosted by a guy named Gontran Cherrier, is about baking.

This week, he made a traditional dish called les seins de Ste.-Agathe, Saint Agatha's breasts. They're little cakes in the shape of breasts, and there are always two.

They come from the legend of Ste.-Agathe, a sicilan beauty who was tortured by one who wanted to marry her. When she refused, he cut off her breasts.

So, Gontran is showing us all how to make the cakes, and the joke material is flying left and right. He maintains all seriousness of course. But I lost it at one point when he said, "Ensuite, poser vos seins sur l'assiette."

Now, what was that about knockers?

I ordered the hand and apple knocker few weeks ago
am I the only one that loves it??
I keep getting family and friends tell me its creepy
I love the story behind it
there are 2
1) is the story of Charles Dickens had it on his door to show anyone hungry could knock
2) its Eves hand giving an apple to Adam
either way weird or not I love it
My house is Victorian and for years I have been putting original Victorian tpuchs back into it and this Hand ad Apple knocker fits perfect

No, you are not the only person who loves it. In fact, I'm beginning to think I'm the only person who thinks it's creepy! Thanks for the stories behind the knocker. I've never heard either of them (and frankly, both sound unlikely to be true, but that's often the case with the post fact stories to justify these things). I would have thought CD would have chosen something a bit more staple, like a loaf of bread, and why would you indicate that your house was full of people who would entice you to sin like Eve if the other explanation is true??

If your house is Victorian and restored to keep its 19thC identity, then I think this knocker is perfect. I'm sure you will love the knocker when it arrives -- and it's a good conversation opener with guests :-)

Hello!
Can I ask where did you order the knocker?
I need one too :)
Thanks!