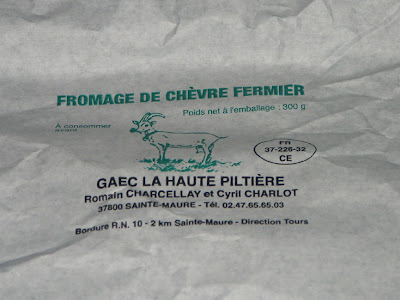 We have written about Ste Maure de Touraine, our local goats cheese (chèvre) which is made on many farms in the area, but until recently we had not visited any of them. We corrected this oversight after we went to the truffle fair at Marigny-Marmande.

Just north of Ste Maure we saw a sign saying Chèvre Ste Maure de Touraine and pointing down a driveway. You see these signs all over the Touraine. We drove (rather tentatively) into the farmyard to be met by a pair of dogs, both of whom appeared to be excited to have met some new friends, and these were followed by a young man who opened up the shop for us. 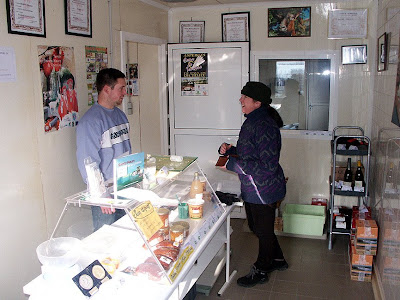 Next door to the shop is the "factory", observable through a large window. Through this window we could see one batch of cheese being made, and another maturing. For some reason it had never occurred to me that the cheese is formed "end on", as it were. 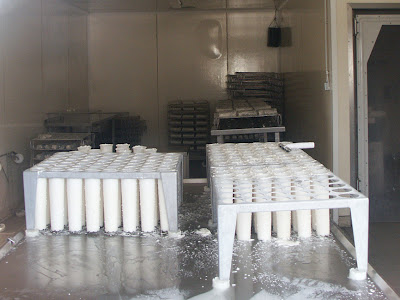 The cheese is made from raw goat's milk heated to about 20°C (about 65°F) to which rennet is added. The milk thickens for a day and the curds are placed in truncated cone shaped moulds to be further drained and formed. Once set, the cheese is removed from its mould, sprinkled with charcoal and salt and allowed to mature for at least ten days. I am not sure when the straw down the middle is inserted, but I assume it is some time between the curds being put in the mold, and the set cheese being removed.

After ten days the exterior of the cheese is pale cream in colour with a soft delicate texture but no mould on the rind. At this stage it can be sold as "fraiche". Every day during the ageing process, the cheese is turned by hand, and a pale mould begins to grow. After three weeks the mould has darkened and the cheese has lost some of its weight and size, and after five weeks the mould becomes more pronounced but with a dry appearance and the interior has a firm texture. The finished cheese has a 45% milk fat content.

When we buy our Ste Maure de Touraine from the market or our mini supermarket we are always asked if we want "plus fraiche ou plus sec?" i.e. do we want it less or more mature. We tend to go for the more mature version, but at Christmas we bought a "bûche frais", an un-matured variety.

Although St Maure de Touraine is my favorite chèvre we didn't buy one here (we had an already started one at home) but we did buy a nicely matured "coeur sec" for 1.50Euro. 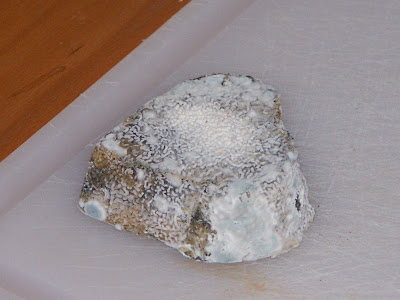 For all its threatening demeanour, we were suprised by how mild this chèvre turned out to be - nowhere near the strongest we have had (for that, you need the little over matured "plugs" from the cheese molds we bought when Liselle was visiting). Although it looks a little pharmaceutical it still tastes like chevre, albeit a slightly sharp one. 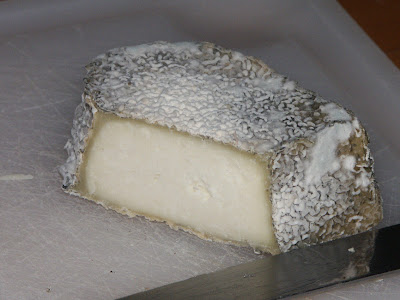 Now we have visited a cheesemaker and found it totally non-threatening, we will be visiting the ones nearer to home. There are at least two Ste Maure de Touraine makers within 5 km of Preuilly, and a number of non AOC cheese makers as well. Not far away is the co-operative dairy of Tournon St Martin where the AOC Pouligny St Pierre is made. We are also only 25km away from the co-operative at Verneuil.

I often joke to my hubby that if we lived in Touraine, I would be quickly be good buddies with the nearest goat cheese producer.Because I love this cheese too.

We have to go try a visit too.Your featured cheeses do look mature, but not scary at all. We once saw a "pyramide"( it was seen in the neighboring Indre département) that looked liked it had been "sprouting" for... months !
No thanks on that one !