I had a bit of a beetroot fest on the weekend, after buying a tray of uncooked beetroot.

I did roast beetroot to go with the roast chicken on Saturday, then added the leftover chicken to a thick stewy borscht and I made a rather complicated chocolate cake containing beetroot for added depth of colour and flavour. The borscht was good (which is just as well, as there is lots of it) but the cake was disappointing (although not because of the addition of beetroot). 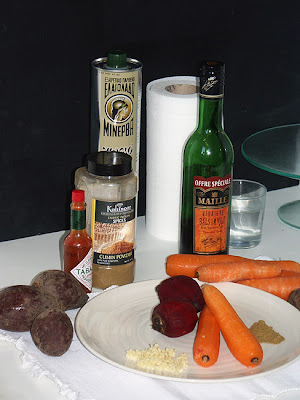 The first thing I made though is a classic French winter salad – grated carrot and beetroot. I used Clotilde's recipe from Chocolate & Zucchini, although, as is my usual habit, I replaced the mustard her recipe calls for with cumin, as cumin goes so fantastically well with carrots and beetroot (and mustard, frankly, does not). 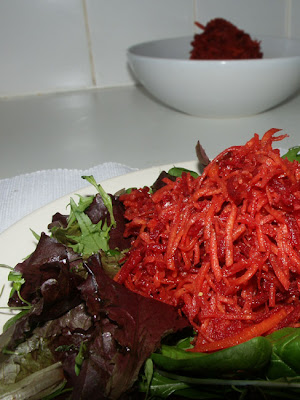 This is one of the few recipes where I use a food processor to grate the vegetables. Chop the vegetables into large but evenly sized lengths, and put 2-3 pieces in the funnel at once. Keep the pressure on with the tamper, and with these hard dense types of vegetables, the fine grating blade produces just the right size and shape of shreds. To grate by hand results in too much liquid being released (some of it knuckle blood) and the shreds being flat and easy to crumble.

PS Eating beetroot does produce a side effect which can be rather alarming if you have not encountered it before. Put it this way – no, you do not have bowel cancer or some frightful disease of the urinary tract. Rather, the marvellously good for you anti-oxidant chemical (anthocyanin) which causes the beetroot to be such an amazingly deep rich red colour is very robust, and survives to colour all in its path on its journey through the human digestive system.

We have received emails giving us further information about two of the topics we posted about recently, so if you want to read what my father said about Bushfires, or what someone who knows la Forge had to tell us, click on the links and read my updates.
Posted by Susan at 10:00

aaah; I know that "entrée", too !
This is one of my hubby's fav's. I also use a food processor for the carots because nothing else chops them quite a finely.
Beets are a little icky to prepare in the kitchen but go together so well with the carottes.
Bon appétit ;)

The cumin sounds good; we'll have to try that.

Susan, were you using powdered mustard or Dijon mustard in your dressing for the beets? Sometimes I use a vinaigrette made with Dijon mustard, vinegar, and oil, and sometimes I just just vinegar and oil to season grated carrots or beets. We'll try some cumin, but it goes against French practice!

Ken: If I use mustard I generally use a mild grainy prepared mustard. In my opinion though, mustard goes with almost nothing except fish, and I almost always substitute cumin, which is a flavour I adore.

Mustard with beef? With fried potatoes? With lettuce and other salad greens? Pork roast? Leg of lamb? Rabbit? Lapin à la moutarde is a classic. In mayonnaise? Vinaigrette? Oh my goodness, I can't imagine life without good Dijon mustard.

"Un jour sans moutarde est comme un jour sans soleil!" [This is an "alexandrin" for those who like poetry.] A day without mustard is like a day without sun!
I use mustard, just like red or white wine, in everything possible. Recently, I slow cooked chicken with carrots and tarragon in a mustard sauce. That was very good.

LOL. You guys are going to be utterly outraged when I publish my Lapin à la cumin then aren't you ? :-))

Mustard with beef – never understood the practice of plastering beef with English mustard. Beef has a wonderful taste of its own and does not need 'enhancing'.

Surely a lot of salad greens have quite enough intrinsic mustard of their own (as they are part of the same family) and there is no need to add extra?

Mustard with leg of lamb and fried potatoes! I'm sorry, Ken, but I had not realised you were completely insane ! :-(

It might just about be OK with roast pork or slow cooked chicken.

I do put a little mustard in mayo, vinaigrette and chutney though.

I don't think you are allowed to live in France unless you use immoderate amounts of Amora or Maille in your cooking and at the table. That mustard burn that shoots up your nose makes it possible for you to pronounce all those French nasal vowels and causes you to forget to pronounce half the letters in every word!