We arrived in Preuilly at 4.30 after flying in to Tours and picking up a Seat Ibiza at the airport.

Our first stop was Leroy Merlin in Chambray le Tours. This was to check out our selection of items for the bathroom to see if they live up to the pictures. Amazingly, they weren't disappointing. I think the shower screen and shower unit will make a good pair, and even on the small 80cm quarter round base we should have room to swing a cat (albeit a small one). They also had an interesting selection of kitchen sinks, which is just another of the 30 billion or so decisions we have to make in the next couple of months.

From there, we drove to Preuilly, stopping in Veigné to buy a baguette for lunch. The church in Veigné is really attractive, with a stone spire - think of a pointed stone wall and you'll get the idea. It must be said that although as we left London we agreed the weather was dismal, in the Southern Loire it was a beautiful early spring afternoon - not bad for late winter. 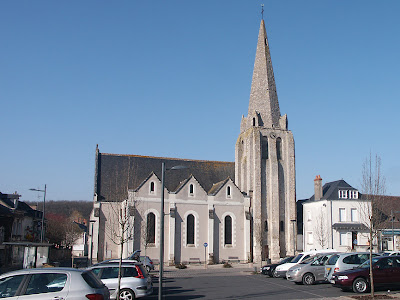 We called in to the plumber's to see if they had received our email, which they had - and they had replied - but as usual with email from orange.fr email accounts, we didn't get it. Just as well we called in, because they had written us in for a visit at 11.00am on Friday.

We then drove to the house. Great news, everthing appears to have survived the big freeze. No puddle of wine on the floor from where bottles froze and exploded, and nothing had fallen over while we were away.

Then I turned on the water.

Although we had turned off the water and run all the water left in the pipes through the tap when we left after Christmas, I hadn't drained the system down at the stopcock. To be perfectly honest, until a couple of weeks ago I hadn't even heard about draining the water down. I now know why it's a good idea. When I turned on the water a spray shot across the kitchen - the copper pipe had split where it crosses the kitchen wall.

So we got in the car and went back to the plumbers (via the menuiserie, who we learned we were expecting at 6.00pm on Friday). Unfortunately the plumber was busy - probably fixing the pipes of other English people who had just arrived back in town. As it was an urgence they said they would be here as soon as they could to fix the leak.

We then went off to Yzeures supermarche to provision ourselves. On the way we stopped in at Gamme Vert and picked up a roll of plumber's fixing stuff tape to do an emergency fix. 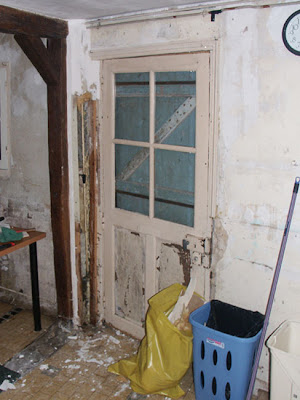 When we got home, I taped up the split and turned the water on. We could hear water running, but none was coming through the tap. I turned the water off again and realised the water was trickling out of the base of the wall. Until that moment, I had assumed the wall by the door was stone, but it was only plasterboard (actually until that moment, I hadn't really looked at it.) I grabbed a hammer, did some "finessing" of the plasterboard and found a pipe running up the wall. With a split in it.

I taped up that split, turned on the water. We could hear water running, but none was coming out the tap. There did appear, however, to be water running under the sink. We opened the cupboard under the sink (something we have resisted doing before) and saw that the pipe was split there.

I taped up that split, turned the water on. We could hear water running, but none was coming out of the tap. There was a lot of noise, however, coming from the toilet. I opened the toilet door and saw the pipe was split leading to the tap for the washing machine.

I taped up that split, turned the water on. We could hear water running, but none was coming out the tap. So I turned the water off again and we agreed that until the plumber arrived on Friday we would survive on wine.

Methinks that plumbing may be one of our first jobs.

That's one thing we learned when we had to leave our house 11 yrs ago during the worst Ice storm in Montreal. When the police rang our door to tell us that we have to evacuate because we were too close to a power line and substation, we were told to drain the water from the different taps and flush all the toilets in the house. We even poured some anti-freeze in some drains that ran along some walls.

This is the M.O. that we follow when we go away for a couple of weeks during winter. Just in case the weather turns for the worse during our absence and the deep freeze sets in.

Good luck to both of you and hope that you didn't lose too many bottles of wine.

OMG, what a mess!

That's the reason why in winter time I leave the heat on as low as possible in my house in Virginia to prevent such things from happening. For me, draining the pipes, as my "cousin" in Montreal suggests, would be a pain in the neck, positively and figuratively.

Good luck with your new chores.

We did drain the water out via the garden tap and sink, but not via the little stopcock where the eau de ville enters the house, which would have completely emptied the system. We didn't realise what that little tap was for. Never mind, we've learnt stuff and very little damage was done. No bottles of wine were lost. If we had heating we would leave it on. We set the thermostat in our UK house to turn the heating on if the temperature goes below 14C.

Beaver: You know that anti-freeze is both very poisonous to mammals and very attractive to them (because it is sweet tasting)? Please be careful about getting it into the drainage system if there is any chance that it flows into an untreated watercourse.

Voine, voine.
But your good. Plasting all them splits, one by one, and without loosing your temper.
Bengt

You poor things.
It's amazing how long you can survive on wine and baby wipes, though. Our years of camping taught us that !

Susan
Thank you for this info.
We don't use anti-freeze usually but in that case it was an extreme situation because we didn't know for how long we would be away and the house would be without power (huge transmission lines were down because of the weight of the ice and deep freeze in the night) . Never want to experience that again and that's why in the new house we have gas for the fireplace and for cooking.

The antifreeze you put in the radiator is poisonous to all living creatures but the one you use for your windshield´is based on alcohol and thats what you can pour down your drainage to prevent freezing. But never overdo it.
Bengt

Even if I had attempted to drain the pipes, I am not sure we would have avoided the damage - the house appears to have been plumbed by the same free spirit who did the wirirng.

The water travels from ground level to ceiling level, before plunging via a series of dips to the taps. Just draining down where the water enters the house would not have helped.

In addition to the eau de ville, perhaps you can add a tap for eau de vie. Then you can work on red and white running wine.

Now I have to look up at what point alcohol freezes...

It freezes at a point lower than we had ... Our wine survived