This is not uncommon, although whether it is that the menuisier hasn't replied, or if he has replied and our email program has eaten the reply (it does this with emails from France quite often) we don't know. With any luck, we called in on him yesterday on our way into town just to firm the arrangement up*. We have rejigged our plan for the staircase: originally we planned to have it replaced like for like all the way up (but in exotic wood), but now we may settle for like for like on the first flight, and be less ornate on the second flight. We are also hoping that some of the wood from the second flight can be re-used on the lower level.

We like the elegant turney bit,
but it's expensive to replace 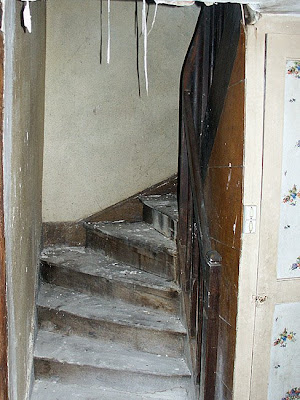 We have arranged to be visited by the plombier (same situation regarding email and calling in as with the menuisier). This is to talk about heating and plumbing stuff in general, as well as getting a devis for plumbing up a shower room (or maybe the bathroom, or maybe both) and a couple of toilets.

We are also hoping to run into one of our neighbours who is a decorator and plasterer to see how much it is likely to cost if we decide to pull down the ceiling in the kitchen and have it replaced (it's a bit yukky and has electrical stuff all through it that I want removed before we start installing again). We also need to have the ceiling in the front room replastered (this was done properly in the past with laths and real plaster, then unfortunately covered up with polystyrene tiles).

And also, we have to buy some wood so I can start on the frame for the bathroom floor.

Not the busiest of days (on paper), but I will be surprised if we get it all done.

*I am writing this last week. I am able to do this because I have a plan
Posted by Simon at 10:00

Is your plan palindromatic [?] like this one: A man, a plan, a canal, Panama?

Re: plombiers. When we needed to have a wood-burning stove fitted in our little house in Le Grand Pressigny, we managed to track down Pascal the plumber - actually we spotted his van in the street and ran after him waving madly until he stopped. He produced a well-thumbed catalogue which fell open at the page for the stove he recommended. We agreed a price and asked if it could be fitted by Christmas. Afterwards we heard nothing at all and had no idea or confidence that it would be fitted at all, never mind by Christmas. When we walked into the house on 23rd December (this was in 2007), not only was it fitted but also it was lit !!! Is that wonderful or what? Just one more reason to love the place. The French for wood-burning stove seems to be "poele". Unfortunately my other half got this mixed up with "poulet" and we spent an entertaining evening confusing the locals in the Prehisto bar explaining how we were very pleased that our house was heated by a lovey new chicken !!

All the tradepeople called in, and we now await a pile of devis. As we suspected, the plumber had responded to our email, but as they orange.fr, we didn't receive it. This is vexatious- why does every ISP seem to filter out all orange.fr emails as spam?

The people of le Grand Pressigny must be worried: Harley Davidsons and hot chickens - what do those Anglos get up to?