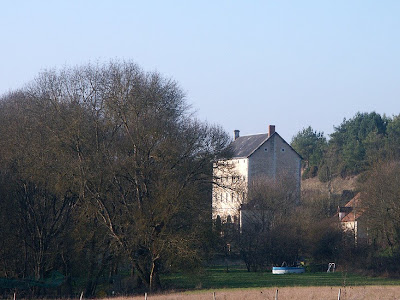 This tall building is on the Claise river between Preuilly and Chaumussay. We thought it was a mill, until we realised it is called la Forge ('forge' is the same in French as in English). We know absolutely nothing about its history, except that we have been told the names of some of the (former) owners.

This is the same building, taken from the other side. You can hardly recognise it as the same place. 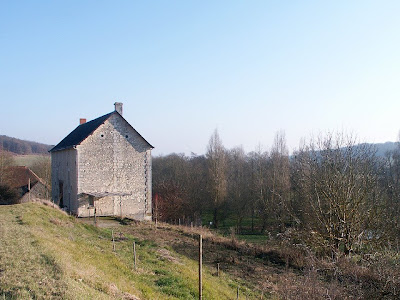 Update: We've had an email from someone who knows this building and the adjoining, older, farmyard complex. Apparently, although it is known as la Forge by everyone, and is marked on the map as such, successive owners have found no traces of a forge in any of the buildings. The tall building was actually a tannery! It dates from the late 19th century and the upper floor(s) were single very large open rooms used for drying sheep skins. The farm buildings include a couple of tiny cottages, a pigeonnier (dovecote), byres for animals and a large barn with a cave (wine cellar).
Posted by Susan at 10:00

Is it bigger on the inside than it is on the outside?

I think it is definately bigger on the inside than it looks from the road - from the sourthern approach, anyway.

This is one of those buildings it took me ages to get my head around. Because it looks so different depending on which approach you take, it didn't sink in that the small building you saw when driving up from Chaumussay was the same one as the big building you saw driving from Preuilly.