I have a three channel brain - that is, I can think, in depth, about three things at once. At the moment it is not enough for what I am trying to do; for that I would need a multichannel broadband brain with added brainy bits.

The bathroom is my first thought. I think I have chosen tiles, shower base, shower unit, shower screen and mirrors. I am still pondering lighting (but am seriously considering an array of daylight LED lamps in the ceiling); the toilet - possibly the 2nd from bottom (as it were) cost wise although having a Villeroy et Boch appeals; and the hand basin (I know what I want but I would have to make it myself I think) which means I can't choose the taps until I know what sort of handbasin it will be. This is added to the business with building the bathroom floor and having to do carpentry. At least I have decided how to do the carpentry; I will be over-engineering it by a factor of at least three. Eventually it should (with any luck) look sort of like this: 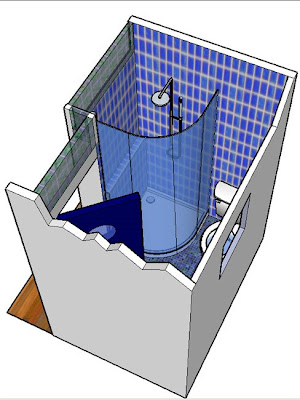 I will start calling this the shower room - there is just no room for a bath in there.

And, of course, there is another bathroom to do - an en-suite off the second bedroom. This one will have a bath (but no shower) a WC and a basin. The reason for not having a shower is that it is in what used to be the "too small to use as a third bedroom" and has really nice chestnut wooden floors which we want to keep. This means trying to keep splashage down to a minimum - and trying to work out the best method of sealing the boards. At the moment I am leaning towards wax, because we don't want a plastic looking varnish on them.

The second bathroom, from the second bedroom.
Note the freshly glazed and painted windows 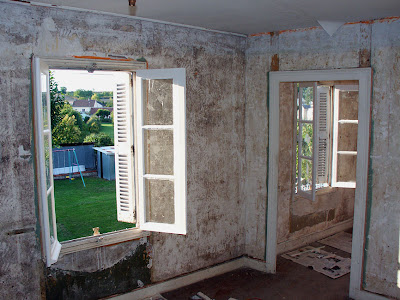 Hopefully we can come to an arrangement for all this whereby we buy the fittings and do the water in bit, and the plumber does the drainage. Double hopefully we can arrange that this happens within the next 6 - 8 weeks. This means I have to do the carpenter thing soon.

The second strand which occupies me is the electricity. I have to work out exactly where I want all the electrical fittings - power points, light switches, lights, telephone points, TV aerial points, computer network points and the large fixtures like the oven, washing machine, fridge and dishwasher. I also have to learn to do satellite TV stuff and LAN computer networking. All this has to go behind the walls

I have decided I want very few overhead lights. All the rooms will be lit by a number (probably 4 or 5) smallish low energy wall mounted up-lighters on two circuits, with additional standard lamps in the lounge. This is only the start - being France and not England, I have a choice of plugs and switches. I would really like the anodised aluminium ones, but can we afford them and should we have a different, co-ordinated colour in each room??

Then there is heating. We have decided on a wood burning fire (a Poêle à bois) in the front room, which will hopefully heat most of the ground floor. We will combine this with a heat distribution box attached to the flue to warm the upper rooms. Im addition we would like some sort of eco-heating - either geo-thermal or aqua-thermal. My current thinking is that we do this and miss out on the underfloor heating, installing high efficiency "baseboard" radiators. These are heated and vented skirting boards. Not quite as aesthically pleasing (or toasty on the toes) but a lot cheaper, quite discreet, and it doesn't involved taking up all the floors and tiles. I would also like either solar hot water or photo-voltaic electricity generation (or even both) to be really green, but can we arrange all this in time and within budget? It would certainly save money in the long run and we are wondering the economics of spending money to have almost no electricity or heating bills in future. Of course, any piping will have to go behind the walls

Then there is the Kitchen. Don't get me started on kitchens. So many choices, every single one of them wrong.

Please, really, don't get me started on kitchens. Not yet....

And the first person to mention secondry glazing for traditional French windows will be sent to the naughty step for the next billion years.

Email ThisBlogThis!Share to TwitterShare to FacebookShare to Pinterest
Labels: Bathroom, electricity, Our house in Preuilly

Hi S&S. Thank you for the pics of the snow, very pretty, but I still hate the cold.
The wood heater I had when we first moved here was ok ...then the 2nd winter I figured out how the fan part worked, after that, it was REALLY GOOD, heated the whole house.

Actually the snow has been lovely, and very nice to be out in, but it is raining now, and very cold. Set to get colder too.

As expected, the sale of your house in Australia has triggered so many brain waves that it seems almost unbearable. When all your options are sorted out you'll feel much relieved. Good luck with your thinking!

are sun tunnels of any interest or possible for you? i've recently seen a bunch installed in what used to be a suicidally dark house and they're fantastic.

PJ. My parents have them, and I like them, but the only place we really need more daylight is the staircase - where, ironically, the combination of roof and second flight of stairs doesn't allow for one.

The house is actually fantastically light when the sun is shining and we have all the shutters open, which is not typical of houses this age in France.

Hi.
About your chestnut floor. Treat them as a ships deck. Seam them and varnish. Then you can be the captain.
Ship ahoy.

Anon: Having crewed for Simon aka Captain Bligh before, I would really prefer that he is not encouraged in this direction ;-)

Regarding your floors- I used 3V3 Lasure Bois, the one for outdoor use (picture of ski chalet on the outside, I think!)and applied 3 coats. Even a major water leak did not penetrate that finish - it pooled nicely on top till I dried it off!

Regarding your shower room - I have a house in the Netherlands (which I am trying to sell incidentally) which has a completely tiled floor and walls. The shower is in the corner and there is no curtain, cubical etc which makes for a very spacious feeling. The shower is set slightly lower than the surrounding floor but I have friends who have a flat floor with a gentle slope towards the drain set into the floor. Cleaning up is no more difficult than a normal shower.

Just a thought and I hope I don't bend your brain yet further.
Simon
www.joandsimon.blog.ca