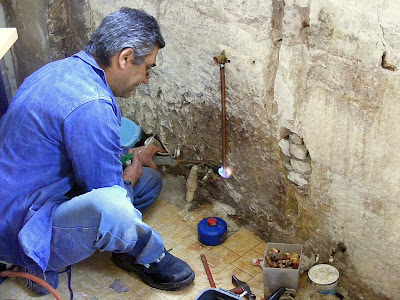 You wouldn't see that in a National Trust property.
We've just had our annual winter crise d'eau. Last winter our non-functioning boiler sprang a leak and flooded the house and street unbeknownst to us until we returned to find the water had been turned off in the street by the garde champêtre. This year,with the unusually cold weather, our aged and apparently fragile plumbing pipes burst in quite a few places.

Reporting our urgence to the local plumbing firm, Bertucelli, produced Pascal last year, and again this year, to set us to rights. This time he has disconnected all the old pipes and installed a single tap where the water enters the house (eau de ville).

Pascal is a nice man and a very competant plumber. Fixing our plumbing is always a bit of a challenge for him, as it is old enough not be in any current standard size. He spends quite a bit of time rummaging in his van through a considerable collection of bits that might come in handy sometime.

Connecting the new tap involved brazing all the pipe joins. This is something that involves him getting out his little orange gas bottle and lighting his blowtorch. 'Hot work', as this is known, is completely banned in National Trust properties, because of the risk of setting fire to buildings. It was banned after the devastating fire at Uppark in 1989 was started accidentally by lead soldering on the roof. The massive conservation and restoration project this triggered was taken so seriously that the then Head of Conservation was issued with the very first 'transportable telephone' in the National Trust.

Happy in his work! 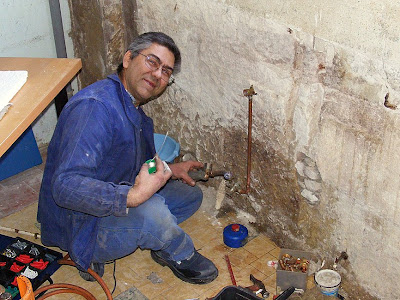 Pascal, who doesn't have to worry about such foolishness, casually set up his work on a plastic crate, resting on a large shifting spanner. He was delighted when we asked if we could photograph him, going to the extent of calling us in slightly later when he thought there was another photo opportunity. He also corrected my French when I told him when he would be appearing on the blog, making me 'repeat after him'. Pascal is one of those generous people who can do this sort of thing without making me feel patronised or a complete linguistic failure. 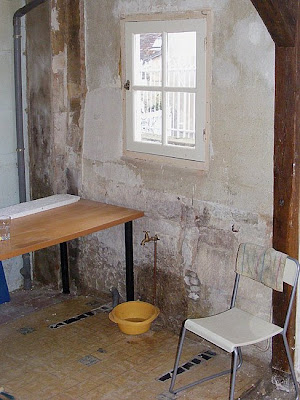 So for the time being, we only have one tap and the toilet has to be flushed using a bucket. This is "the one step back" - the two steps forward is still to come: we have just seen Pascal's colleague, Monsieur G. to discuss our full plumbing and heating requirements and he has gone off to produce a devis (estimate) for the work.

Email ThisBlogThis!Share to TwitterShare to FacebookShare to Pinterest
Labels: Plumber

It's so nice when you find the right person to do a job.It's an added plus when they are friendly, too.

I've met so many wonderful people in France ( of course unfriendly & narrow minded ones too ...); meeting the people here has been one of the best parts of life in France.

Bon courage for what follows with your temporary use of the waterworks.

Thank god for the local plombier. Our's is very competent, too. Pascal looks like the kind of guy who'd stay for the apéro if one was offered.

That's a coincidence - our village plumber is called Pascal, too. Different village, different Pascal. We had a similar problem with our waterworks due to the long cold and snowy spell just after New Year and had to engage him to fix them. "Tant mieux"

Barbara: yes, I think Pascal may be a real treasure.

Dedene: I think you are right about the apéro.

Jean: same cold spell as did for our plumbing.