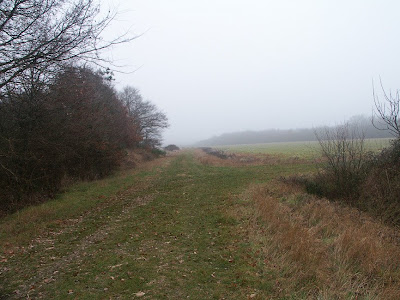 OK, so it's not the most dramatic looking place we've ever featured on the blog, but the name Carroir au Loup (just north of Preuilly on the road to le Petit Pressigny) is interesting. Carroir is an old local word for crossroads, and loup is French for 'wolf'. What happened here for it to be called 'The Crossroad of the Wolf'?

There are dozens of places in France that reference wolves. Here in the Touraine, Poitou and Berry we have Pette Loup ('Beware Wolf'); several Chanteloup eg near Amboise; Bois de Chanteloup, between Mézières-en-Brenne and Chatillon-sur-Indre; Saint-Loup-sur-Cher; la Robe de Loup ('the Wolf Coat / Skin') near Ingrandes in Vienne; l'Alleu des Bois and l'Alleu des Champs, south of Oyré ('leu' is the old spelling for 'loup'); la Pont de la Leu at Chalonnes-sur-Loire. Pouring over any reasonably detailed map will reveal many more 'wolf places'.

In the middle ages there were specialist wolf hunters, who set up camps in the woods (chanteloup) and constructed shelters made of branches known as culs-de-loup ('wolf arses'). Chanteloup is presumably one of those neat French word plays, conveniently meaning both 'wolf works site' and 'singing wolf'. The wolf hunters were fur traders and often themselves wore clothes made of wolf pelts.

It's the wolluf! At the Espace Animalier
de la Haute Touche near Azay le Ferron 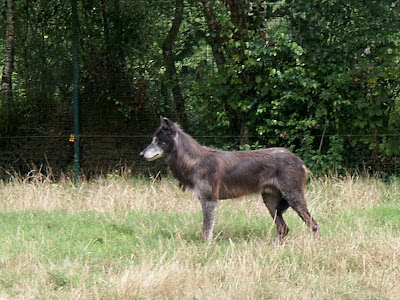 In the summer of 1695 there was an rash of wolf attacks in the Touraine, with a number of people being recorded as having been 'eaten by wolves', and the priest at Fondettes wrote that wolves had killed or wounded many children in his own and neighbouring parishes. By 1900 there were only 500 wolves left in the whole of France. The last wolf in Indre et Loire was shot at Ferrière Larçon in 1908, and the last of the original wild population of wolves in France was killed in 1939.

I have written more on wolves over on Loire Valley Nature.

I think the name of the city of Blois is derived from a word meaning wolf — maybe a Celtic word.

Magical web:
I typed "Carroir" in Google and found your last post. "Le Petit Carroir" is the name of our house, that we are restoring in Cheverny. And our youngest son is currently in Brisbane (Queensland?) for a month.
Aren't these funny coincidences?

Ken: could be – wolves figure amazingly highly in local legends and records. It was fascinating researching this topic.

Thib: magical indeed! Yes, Brisbane is in Queensland – the state capital. I know another young local guy who spent sometime in Brisbane the year before last. There is a language school popular with French students there I think.

I checked out your Carroir blog – it's nice, I will visit regularly. It wasn't allowing comments, but I would have commented that I think you have 'fingered' the wrong species for the loss of your crocuses. I think more likely one of its smaller cousins – Campagnol roussâtre ou campagnol des champs.