This plaque to aviator Lucien Prévost is in the church at Vendoeuvres in the Brenne.
He was killed 100 years ago today. 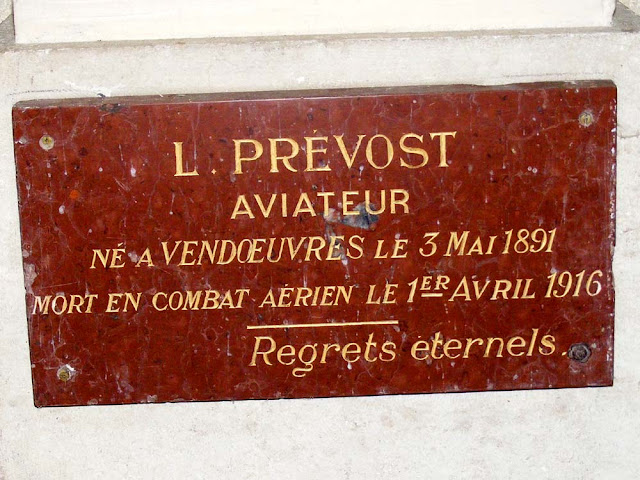 The French Armed Forces saw the potential of aviation very early and began training pilots in 1909. The Aéronautique Militaire formed in 1910 is generally considered to be the first Air Force in the world. By 1912 they had five squadrons and led the world in aircraft design. By the beginning of 1914 there were 132 planes and 21 squadrons, ready for their big test when war broke out in August. In 1916 most of the squadrons were based near Verdun and combat formation flying was introduced. Verdun was the first great battle in the air and the contribution of successive waves of French fighter squadrons over the skies of Verdun was critical to the hard won French victory.

Maréchal des logis Pilote Lucien Georges Victor Prévost was a non-commissioned pilot officer in the 27th Dragoon Regiment, attached to Number 2 Squadron of the fledgling French Air Force. He enlisted at Chateauroux. He was killed in aerial combat over Neuvilly-en-Argonne (Meuse).

He was awarded the Military Medal in September 1915 and the Croix de Guerre, and was mentioned in dispatches twice. He flew a Caudron and was based at Austricourt-sur-Aire (Meuse). According to his commanding officer he had 'demonstrated since the beginning of the campaign a remarkable endurance and courage. He had several bullets in his plane on April 28 [1915], having had a cell mounting broken by shrapnel. He nevertheless managed to set up and start shooting, all due to his coolness and skill'. In addition, he was a 'very skilled and very brave pilot, always seeking to fill the most difficult and dangerous missions'. On 22 September 1915 he 'was alone on board and despite a violent cannonade directed against him, was able to launch twenty shells at a train station and military buildings in enemy territory, accomplishing a raid of 450 kilometres into German territory'.

It's time for another amazing Days on the Claise almost free offer:

We have become owners of a caravan (which can be seen here). Although I like the idea of a caravan we can't store it, and its not quite old enough to qualify for retro camping. At the moment we are paying to keep it stored, but that doesn't make sense. We're not sure how well it tows, so you may need a trailer, although industrial quantities of WD40 may make it towable if you're not going too far.

If you're looking for a garden office, drop us an email.

Email ThisBlogThis!Share to TwitterShare to FacebookShare to Pinterest
Labels: Churches, Memorials, the Brenne, Towns and Villages near Preuilly

I see he kept flying 27 days after his death...
that's quite a feat!! LoL!
The bravodo/adrenalin in a youth in his early 20s must have made flying something like that akin to F1 racing today....
The Wright bros might have been the first to fly under power, but the real developers were the French...
once the concept became a reality, you had real 'planes as we know them from Bleriot onwards!!

Sorry. That'll be my fault, inserting the wrong year. I'll correct it.

And there was me thinking it was his adrenalin!!