On the night of 26/27 April we had a surprisingly heavy frost. The next day reports from Bourgueil to Amboise started coming in that the vines had been hit hard. Some vineyards in Bourgeuil have lost their entire crop because the vines will not recover this year from the frost damage just as the vines had burst into leaf, a critical moment in the vineyard cycle. Other particularly badly affected areas include Saint Georges sur Cher, Cravant-les-Coteaux and Montlouis. 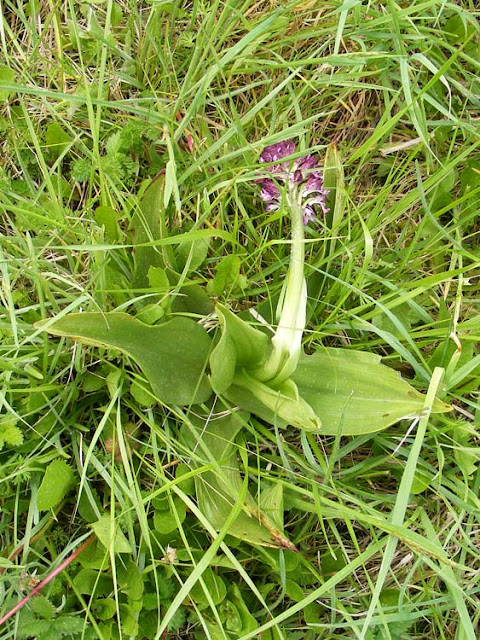 The damage was oddly patchy in our orchard. The table grape vines, which were not yet in leaf, have crispy brown leaf buds. My guess is that they will more or less recover and give me a crop, but I could be wrong. To my eyes the fruit trees don't show any significant damage. The cherries are in full flower and some bunches have gone a bit brown, but there's no leaf burning. The apples have only just started to flower and would have only been pink buds when it frosted. They look perfect. The pears had almost finished flowering and don't look damaged. The plums flower too high up so I can't tell how they fared, but they too had almost finished flowering.

Many of the Early Spider Orchids have been zapped by the frost. The flowers are brown and shrivelled and the stems limp. The Lady Orchid has equally been knocked. I've never known these two species to be frosted before, so that's an indication of the unlucky timing of the frost and the low temperature (as low as -6°C were reported in some places). Of course, I still have Bee, Lizard and Pyramidal orchids to come in the orchard, as well as a couple of other less abundant species. They are unaffected by this weather. 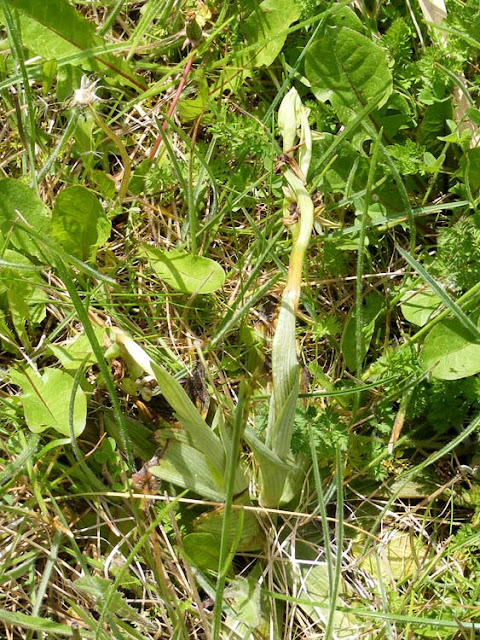 The newspaper reports that the last time there was a frost this severe at this time was in 1994 and it may even be as bad as the legendarily bad 1991 frost. Local market gardeners have not been too badly affected by the frost, but they are struggling with the prolonged cold and the slow growth of their produce. The fruit orchardists around Azay-le-Rideau say they won't be able to estimate the damage for another couple of weeks, but they are not too optimistic, since the vineyards around them have been hard hit.

Wine producers of course keep an eye on the weather forecast at this time of year, but there aren't many options in the Loire to protect from frost. Late frost that causes real damage is relatively rare, so wine producers are allowed to use things like candles, frost pots and fans, but many don't or can't invest in infrastructure to protect against frost which they are hardly ever going to have to use. It is forbidden in any case to use any sort of fleece protection or sprinklers like they can use in other countries. For more about protection against frost see my post of 15 April 2011, when we saw frost candles in vineyards near Saint Aignan.

I've emailed my friend Véronique at Domaine de la Chaise in Saint Georges sur Cher, one of the areas which seems to have been badly affected. I know they had some damage the night of 18 April, but she hasn't got back to me yet about this week's frost. I am fearing the worst.

The département announced yesterday they have made available an emergency fund of €200 000 for affected wine producers, although they have not been specific about how this fund will be allocated. The total damage bill is estimated to be at least €100 million (which includes lost revenue on this year's harvest, the impact of which will be felt from next spring when the 2016 vintage is released). Many winemakers are preparing to have their income halved next year.

I heard about the frost around Chinon and Bourgueil on the France 2 noon news yesterday. I'm sorry to hear that you got frost down in the Sud-Touraine. Here in Mareuil/Saint-Aignan, I see no sign of frost damage at all. I was looking at the vines in the vineyard out back as I walked with Callie, and everything here looks fine. We live in a area with a distince microclimate, I think. Saint-Georges is not more than 20 kilometers west of us.

Although our garden is quite sheltered our Fig has badly burnt leaves so I can quite understand that real damage has been caused by this frost. We hope that the young figs do not all fall off in the next few weeks! Cannot really assess how the Guigne or the apples have been affected.

Lots of damage here... even plants that are normally frost resistant have been hit...

How terrible. It wasn't as bad here and does not seem to have down any damage.

By the time you get to Blois the reports of damage are much more patchy -- Reuilly and Quincy a bit, a little around Blois itself, but west of Amboise has really been walloped.

I talked to JM about this and he says that we've seen vineyards in France with sprinkling systems for frost.

Yes, I think he's right. I noticed one of the Bourgueil producers (I think) on the news had invested in a sprinkler system. I remember discussing this with a Vouvray producer a couple of years ago and I seem to remember he said it was forbidden in Vouvray at least, but Loire producers were beginning to lobby to change the rules so they could protect the vines a bit better rather than just be wiped out in the rare years frost occurs. What he actually wanted was to be able to use fleece or something similar. Sprinkler systems are too expensive to be worthwhile in the Loire. I think whether it is allowed or not must vary from AOC to AOC.