My father and his Toyota Landcruiser in 2009. 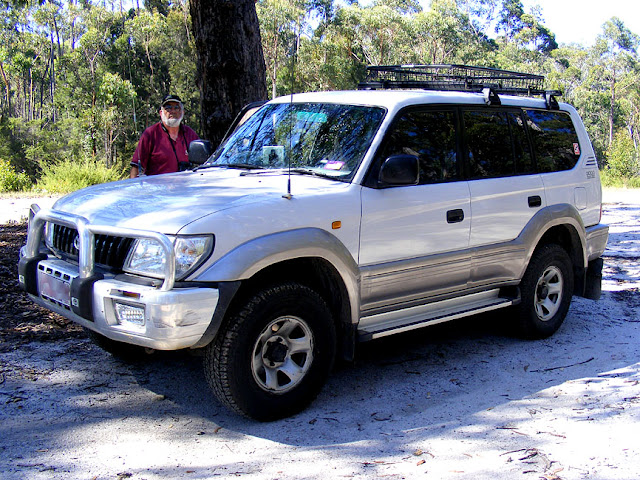 In 1949 Australia began a great hydro-electric project called the Snowy Mountains Hydro Electric Scheme. It needed tough all terrain vehicles for its hundreds of workers and engineers to get in and out. Initially they used Landrovers and Dodges, but neither company could reliably supply the vehicles needed, and the vehicles themselves didn't always cope with the terrain. In 1959 one of the engineering companies involved approached Toyota. This was quite a controversial thing to do at the time as there was a lot of anti-Japanese prejudice in Australia due to the treatment of Australian and other Commonwealth prisoners of war by Japan in the Second World War. But Japan was very keen to enter the Australian market and Toyota's Landcruiser was just the vehicle to make the breakthrough for them. Within 12 months the Cruiser as it was generally referred to had become a legend, with a reputation for total reliability in even the roughest most isolated terrain. Toyota had cracked it, and soon there was hardly a farmer, mining engineer, geologist or outback traveller who didn't own one. Nowadays tour operators, the police, fire brigade and the army all use Cruisers, as well as city dwellers who never go off-road at all.

Our posts on Sundays have an Australian theme. You can read more of them here. Back in July 2013 my Sunday 13 post mentioned the hydro-electric scheme and the Polish workers who came to Australia after the war to work on it.

Email ThisBlogThis!Share to TwitterShare to FacebookShare to Pinterest
Labels: Australia, electricity, The Car and Driving

Not sure about the mainland but Toyota vehicles in general were abundant in Tasmania. Reliability being the main factor. The car we borrowed had over 300,000k on the clock and went like a dream...

Re ossuaries: Eglise St Severin in Paris has one too.

Lovely write up Susan. My husband works for SMEC, the Snowy Mountains Engineering Corporation, which is now an international engineering consultancy firm. The Hydro, as the scheme is known, also brought many European migrants to Australia, who were willing to work through the freezing cold in the mountains. My father had a Toyota Landcruiser, which he used on the farm and which he referred to as the "Daktari" based on the African outback series in the 1960s. He used it like a tractor - it had a full surround bullbar and looked simply gigantic.

Thank you Jocelyn. I've no doubt we've walked past this church and never realised what treasures were within.

I didn't realise the Snowy Mountains project had morphed into an international company.

Yes, it was bought out by the staff when the Victorian and NSW governments wanted to sell it off. SMEC has grown from a hydro focused engineering company to doing just about everything in engineering consulting from Africa through the Middle East, Central and South Asia (where I am), South East Asia, the Pacific and, of course, Australia.