Yesterday we happened to be driving through the village of Colombiers near Chatellerault and spotted this: 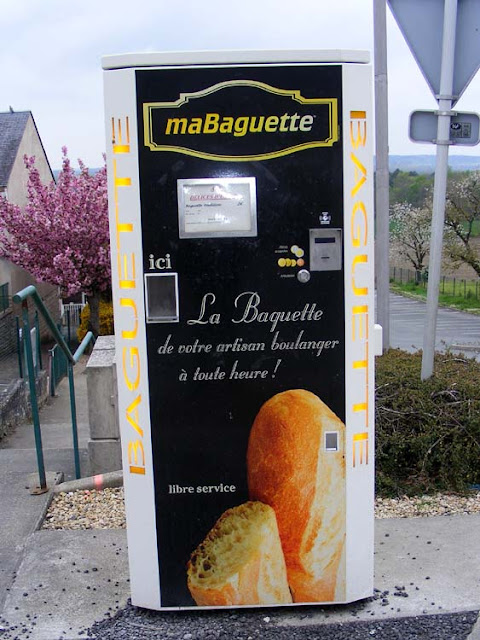 We did a quick u-ie and stopped to take this photo. It is a baguette dispensing machine supplied by Les Délices d'Estrées bakery from Chateauneuf. The baguettes cost €1 each.

Trained by the Compagnons de Tour de France (Master Bakers Guild) Alexandre Bernardeau took over the bakery in 2007. His typical neighbourhood bakery employs 6 people, 4 of whom are apprentices. The baguette tradition is his star product. When he realised there was no longer a baker in the nearby community of Colombiers he installed this dispensing machine. It is restocked several times a day so the bread is always fresh. He has invested in an electric vehicle to make the journey to and from the machine.

A baguette tradition is an artisanal product with ingredients and method of production strictly defined by law. It is not an industrial product, but made fresh and from scratch on a daily basis. The ingredients are wheat flour, salt, water and a little bakers yeast. No 'bread improvers' or other additions are allowed (except a very small percentage of soy or lentil flour). A poolish (pre-ferment) is made, then the dough is given minimal kneading (just enough to incorporate the remaining flour and water). The dough is set in a proving chamber to rise. It is knocked back and allowed to rise four times before being divided and shaped by hand into baguettes. Then it is laid out on undulating linen sheets known as toiles de couches to rise before baking on the floor of the oven. Frozen dough may not be used.


Today is the Fete de la St Georges in Preuilly. We are hoping it will be more bustling today than the past few years, and that the weather holds. The forecast isn't brilliant, but it hasn't been brilliant for the past week and nothing of note has happened apart from a sharp rainstorm yesterday afternoon.

wonder how fresh they taste coming from a machine like that......not quite the same as going into a lovely bakery

I don't know. I thought about buying one to try it, but we didn't really need bread, so I didn't get one.

I wonder if Laurence adds any baker's yeast in addition to a sour
dough starter to her dough.

Having interviewed Laurence now I've discovered that she mostly uses the technique above ie a poolish with a very small quantity of bakers yeast added which is then used to make a dough which is proved long and cool. It allows her to manage the day's work and gives a better flavour. Blog post to come which covers all this.

LOL. I read your headline in the English words and then saw the tall, thin machine with what might have been a slicing blade, or looked that way to my fevered imagination, and thought, Oh dear.