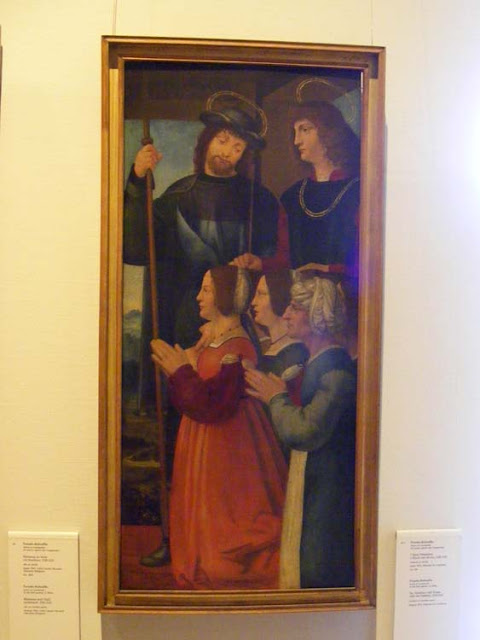 This 16th century painting hangs in the Castello Sforzesco. I can tell it is the right hand section of a triptych, the central panel of which I believe is a Madonna and Child. I can also tell it is Saint Roch standing on the left and Saint Sebastian on the right. Saint Roch is wearing his trademark sun hat and carrying his staff (looking quite different from this amusingly graphic 20th century version I wrote about in January). Likewise, Saint Sebastian isn't looking too tortured. Unusually, he isn't depicted here as a human pincushion. Instead, he is shown delicately holding an arrow in his right hand. The three kneeling characters are probably members of the family which commissioned the triptych and donated it to some church. The two younger women are wearing plain but generously cut dresses. They are dressed fashionably but not very ornately, suggesting that their status is comfortable but not in the wealthiest or aristocratic circles. The older woman on the right is presumably an attendant, with her narrower set in sleeves, plain turban and apron.

But it's a nice 16th century painting all the same.

UPDATE: With help from Simon I have now identified the painting as Saints Sebastian and Roch with Donors by Pseudo-Boltraffio. The delightfully named Pseudo-Boltraffio is a catchall covering painters from the Lombard School between 1500 and 1530, most of whom were students of Leonardo da Vinci. Their styles are so similar that in many cases the individual artist can no longer be identified.
Posted by Susan at 09:00