Last weekend was the Journées européennes des Métiers d'art, where local artisans open their doors to the general public and display their skills

In an uncommon fit of common sense, la Nouvelle Republique didn't assume we already knew what was happening, and listed the events nearby including one at the Musée Auto Vélo in Chatellerault, where M.Tessier would have the atelier open. A couple of years ago we visited Auto Classique Touraine for the Journées européennes des Métiers d'art (and didn't blog about it even though we took hundreds of photos) and I assumed it was the same people: I knew the name Tessier as a car restorer from somewhere. 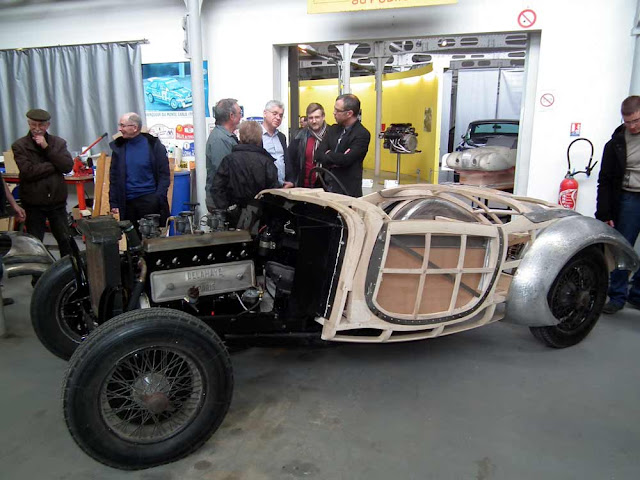 Turns out that yes, I do know the name Tessier from somewhere, they are the garage on the roundabout at Veigné that seems to specialise in British sports cars (and the odd exhaust manifold bolt for Citroén Traction Avants), but this is a different M.Tessier, and a completely different enterprise to Auto Classique Touraine. This means that within 5km of each other we have two custom classic car coachwork builders, and a classic sports car restorer.

The car M.Tessier is rebuilding for the museum is a Delahaye 135M. The Delahaye was, like many top end cars, delivered as a rolling chassis to the coachbuilder of purchaser's choice, and a custom body built to the owner's tastes. This car is a 3.6litre straight 6, with a 4 speed electromagnetic pre-selector Cotal gear box. The body is mainly aluminium over an ash wood frame, and I would have one.


The gear selector is the mini switch to the left of the steering wheel. 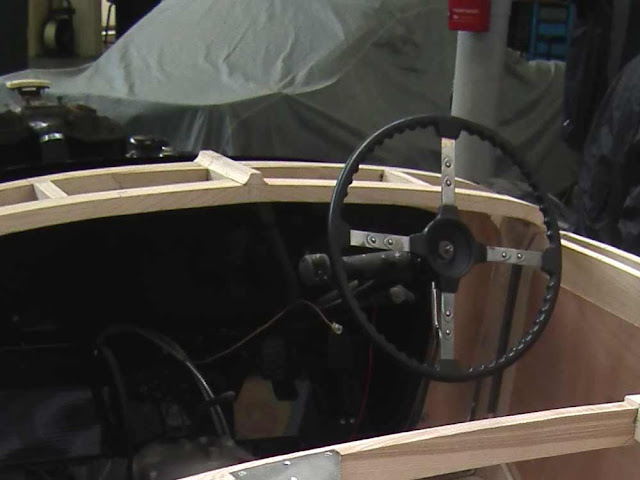 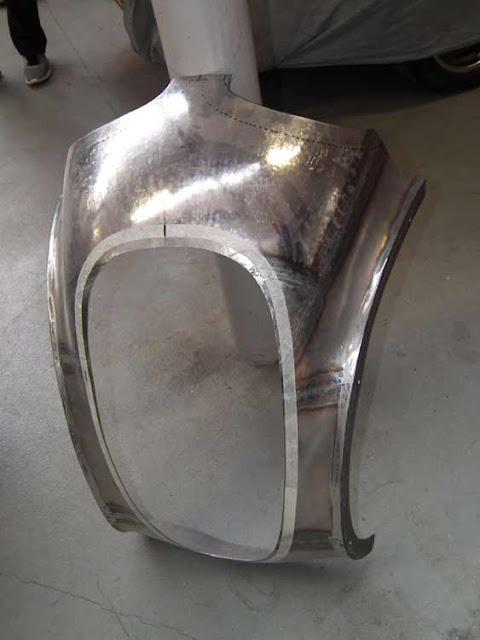 I love this kind of thing - people with amazing skills making beautiful things out of seemingly unpromising lumps of stuff. I also like the Museum at Chatellerault. It's in a great building and has some amazing cars and motorbikes, as well as an exhibit about the arms factory that previously occupied the building.

Eventually the car will look like this, which is a 1938 Delahaye 135M built by Auto Classique Touraine in 2010.

Au supermarché hier: Has anyone else noticed there seems to be a dark brown sugar crisis in France? I haven't been able to buy any for weeks, in any supermarket I've tried. I'm talking about the soft sugar that is called vergeoise brune in French and made from sugarbeet.

One type of product that seems to have burgeoned in French supermarkets since we first arrived is the range of spices available. The only problem is that much of the new range is not individual spices, but all sorts of blends -- for chicken, for curries, grills, various nationalities cuisine, couscous, and so on and so on. I was standing in front of the spice shelves in Auchan yesterday, not very hopefully scanning them for allspice (Fr. piment de la Jamaïque) and two young women came up beside me. They also scanned the shelves anxiously then one said to the other, in accented French, 'It's all blends! They don't have any on its own!' I didn't catch which particular spice they were seeking, but I was interested that their reaction was the same as mine. I don't want someone else's idea of what spice blend is good on chicken. I want the individual spices and to be able to mix to suit my personal tastes (and, generally unsuccessfully, second-guess what Simon will like). Susan.

Ticks: I was reminded yesterday that it is time to start checking for ticks every time you come back from a walk in the countryside. We don't have the problem here with ticks causing paralysis of pets like they can in Australia, but just like there and the US, ticks here can carry Lyme disease. And you really don't want to get that. Tick tweezers are easily available from your local vet or the pharmacy. Seek medical treatment within 48 hours if you have any concerns (the sooner the better). The classic sign is a 'bullseye' bite mark, but not everyone develops this. Susan.

Film Showing: Last year a movie was shot partially in Preuilly. It is a comedy drama called Vendeur and is showing on Saturday 9 April, screening at 8.30 pm at the Salle des Fêtes. It's about a salesman, very good at his job, but everything else in his life is sacrificed for the sake of his career. When his son comes to him to ask for a job to fund starting a restaurant, he hesitates, then takes him on as a salesman. Against all expectations his son turns out to be talented. We are planning to go with friends to watch it. Susan.
Posted by Simon at 09:00

It's true that there are a lot of pre-made spice blends in the supermarkets. Curry powders and ras-el-hanout started a trend, I think, and like you I mostly prefer to mix my own spices. One place where we've always been able to find allspice (berries, and maybe powder too) is at the Paris Store in Tours Nord. The French equivalent for allspice is quatre-épices, and I think you can find that everywhere.

Susan, we get allspice berries from the spice man who comes to the Saffron Fayre... and is once a month on Descartes market...
there is another guy there more regularly who sells olives and does spices as a sideline [useful in emergency, but twice the price of the other.]

Soft Brown sugar... both light and dark are available from the Biocoop in Chatellerault... and it is the real stuff, made from cane sugar...also bio and fairtrade... and Daddy does both from Maurice...the light is called cassonade douce...but what to look for on the shelf is La Poudre a Maurice" and the colour of the sugar shows through a rather charming Dodo. Also, of course muscavado cane sugar!!
I didn't know that there was a sugarbeet version of either...how do they make it dark? Molasses??

On spices, there are a lot of those blends turning up in US markets, too. I think we may be, alas, in the middle of a marketing trend.

I've never seen it in the Paris Store. Maybe I'll have to look more carefully. I've got quatre-épices, gallons of the stuff.

I don't know why I didn't get any from the spice guy at the Saffron Fair. I have a vague memory that he didn't have any on the day.

Vergeoise is apparently sort of semi-caramelised, cooked once for blonde and twice for brune.

I think you might be right. The proof will be if recipes that list these spice mixes as ingredients become ubiquitous.