Last year French film writer and director Sylvain Desclou brought a film crew (Fr. équipe du film) to Preuilly for the filming (Fr. tournage) of Vendeur ('Salesman') on location. We drove past them when they were filming in the cemetery. The decision to film in the area came about because the director's family comes from here and he spent childhood holidays here with his grandparents.

On Saturday night the finished film was premiered in the salle des fêtes (the town function rooms, which double as the cinema once a month).  We went with Niall and Antoinette and the room was packed by the time we arrived. Luckily we spotted a group of four seats in a row on the left hand side of the room and grabbed them quick.


Pantechnicons and coaches parked outside the mediatheque last February for filming in Preuilly. 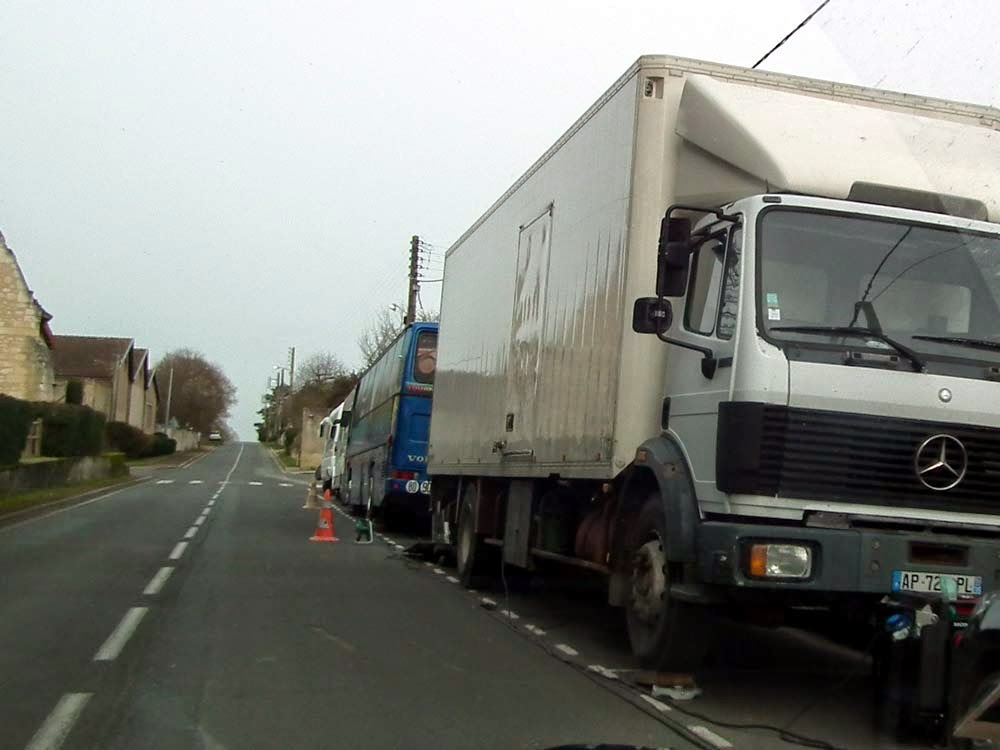 The film is about a salesman, Serge (Gilbert Melki), who is very good at his job, but has sacrificed his family and his health in the pursuit of his career. He works in a kitchen showroom, for Daniel (Pascal Elso) and describes himself as an itinerant (Fr. un bourlingueur). His son Gérald (Pio Marmai) is a chef who has just lost his restaurant. He comes to his father to ask for a job selling kitchens. At first he is hopeless at it, but with coaching from Dad, finally gets the hang of it -- rather too well. Serge realises his son is making the same mistakes he did and tries to warn him. He is also distinctly miffed that Gérald is starting to beat him in the monthly sales figures. Ultimately, after a health scare Serge deliberately sabotages Gérald, causing the break up of his son's marriage (Clémentine Poidatz plays his wife Karole) and the loss of his own job with Daniel. At the end of the film we see that Gérald has re-established himself as a chef, but Serge is unable to give up the buzz of selling and has moved to the south of France to sell swimming pools.

Quite early in the movie we started recognising places, such as the roundabouts at Chambray les Tours. A real frisson went through the audience only when the scenes became really local though. Serge drives along the road to Chaumussay in his classic black 1980s BMW and the murmur rippled through the assembled population -- 'Look, it's La Forge...' Later views over Preuilly were very recognisable and we identified the house used as Serge's father's. Our neighbour Gilles says he caught a glimpse of his own house and another neighbour's.


After the film finished there was a question and answer session. The writer and director (Sylvain Desclou), two of the actors (Clémentine Poidatz and Pascal Elso), the casting director and a couple of the finance people sat on the edge of the stage and took questions from the floor.

Q: How long did filming take?
A: Eight days in a real kitchen showroom, three weeks around Tours and in the south Touraine, 38 days in all. The nightclub scenes were filmed in a real nightclub (Fr. boîte de nuit) in Saint Pierre des Corps. The main filming started in January of 2015 and was finished by the end of April. Then from May to November of that year a team of 50 people worked on the film making it ready for release.

Q: What was the budget?
A: 3 million euros. (There was a buzz at this information along the lines of 'goodness what a lot of money', but the director went on to explain that this is a tiny budget and has to cover a team of dozens of people for about a year, quite apart from all the actual filming.)

Q: How long will it take to break even?
A: No idea. That's a question for the distributors, and will depend on how long it stays in cinemas, how good the audience figures are and when it's released for television. It will premiere on Canal+ in two years time.

Q: There was a lot of drinking in the film. Are the drinks real?
A: No, they are syrups or teas. The cigarettes are real, but the lightest possible. The cocaine was real (joke).

Q: What research did you do about the life of a salesman?
A: The director talked to salesmen in a number of fields, not particularly kitchen showrooms. He wanted to focus on the sort of character whose skill is selling (it doesn't matter what) and will move from franchise to franchise to practise his trade, making money for himself and his boss. A whiteboard with the sales figures on it features prominantly in the film, and the director talked to a franchise manager so he could understand the figures. Gilbert Melki had worked as a saleman before he became an actor.

Q: At the end Gérald is shown as the proprietor of the Moulin Fleuri. Is that the real restaurant? (It's at Veigné and was where Edward and Mrs Simpson had their wedding breakfast.)
A: Yes.

Q: How do you cry on demand?
A: Pascal Elso admitted that he always had to cheat with fake tears, but that Clémentine Poidatz felt things quite intensely and cried very easily.

Q: What training did you do to become an actor, director, casting director...?
A: Pascal Elso responded that he had done a lot of theatre and had rather a fragmented training. Clémentine Poidatz said her background was fairly classic, beginning with chosing the right high school, then the Comédie Française. She said she didn't like doing theatre and preferred filming. The casting director had started as a stylist, and the director said he had done all sorts of things, most not related to film and had originally studied political science and economics.

Q: How was the music chosen? Why did the songs all have English lyrics? Why were there no songs with French lyrics, in particular, no chansons? Wasn't an opportunity to convey an extra nuance missed by having songs in a language the audience didn't understand?
A: Although it was fairly clear that the director had chosen the music, it was the actress Clémentine Poidatz who waded in and answered the question most fully. She countered that the songs were there to add atmosphere, a feeling and that the lyrics were not as important as the music (for a French person that is a difficult one to swallow...) The songs had clearly been carefully chosen, by someone with taste and a flair for matching song and action. They were all driving songs, a mixture of British and American and with an urgency of beat that no chanson would have been able to provide. Assuming that you understood English, the lyrics were remarkably appropriate too. (Simon was impressed to note that a song from incomparable John Martyn had made it onto the soundtrack).

Q: What will your next film be about?
A: It will be set in the world of politics (at which point the woman behind us went 'well that won't be set in Preuilly then...') and about a young woman from a humble background who becomes a lawyer and joins the team of a government minister.

During the Q&A session a man stood up and said he didn't have a question but rather a 'proclamation'. He referenced a joke from the film about fathers and it turned out he was the director's father. He wanted everyone to know how proud he was of his son. It was really touching and Clémentine Poidatz promptly shed a few tears.

The poster for the film, displayed in Preuilly's main street. 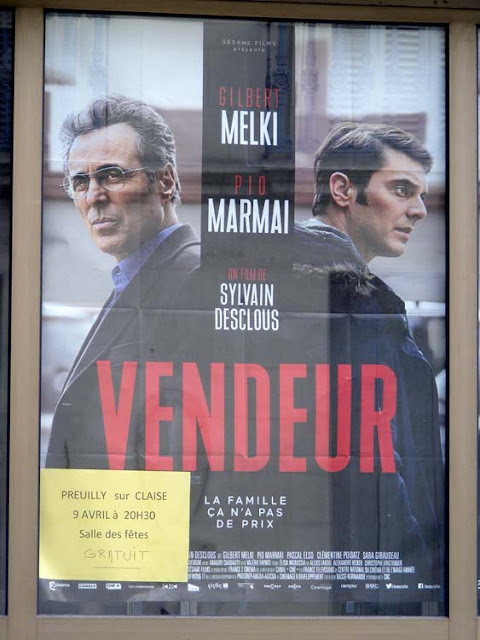 Once the questions had dried up everyone was invited to go downstairs for a drink. We didn't stay, but friends who did report that at the end of the night they were rewarded by seeing the producer drive off in the classic black 1980s BMW that Serge drives in the film.

We thoroughly enjoyed the evening and thought the film was well cast, well acted with some nice comedic touches (Serge ineptly stuffing a pillow into a pillowcase when he comes to stay with his father for example), good directing, shooting and cutting and a believable and interesting storyline. The film is released to the big wide world tomorrow. Here is the media kit (in French).

Email ThisBlogThis!Share to TwitterShare to FacebookShare to Pinterest
Labels: Chaumussay, Events, Pictures of Preuilly, The Car and Driving, Tours, Towns and Villages near Preuilly

This sounds interesting. Maybe in a decade or so it will be available on DVD in the US.

The Moulin Fleuri--that brings back good memories! It's actually in Veigne, close to Monts but hard to find from any direction! Demi-pension was a real bargain when we stayed there. Wonderful, copious meals.

The current chef is the son of the former owners.

Gah! I wrote Veigné originally then changed it to Monts because Simon pointed out that it is signposted from Monts, and at Candé (where E & Mrs S got married) they always refer to the restaurant as being in Monts. I see now that I check their own website they say Veigné. I'll change it back. The wife of the current chef is English I seem to remember.

Now that you mention it, I'm sure you are right about équipe de tournage. I used the phrase they used in the press release, which I expect they chose because they used tournage later in the paragraph and didn't want to repeat themselves.