The Ossuary of Saint Saturnin, Blois 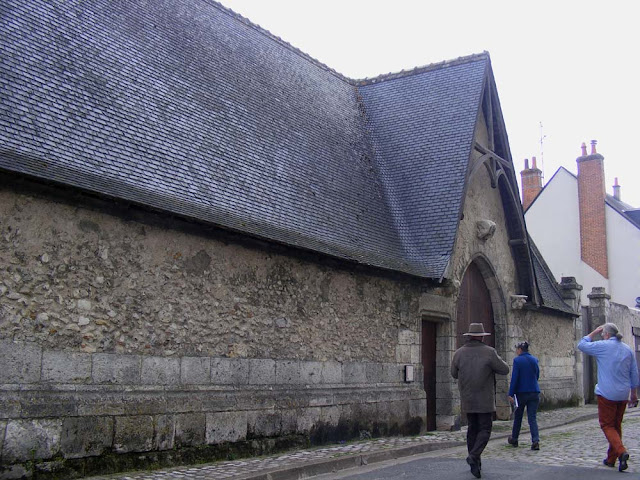 This building in the Vienne area of Blois (on the southern side of the river Loire) is an ossuary (Fr. aître). We had hoped to visit it with our friends Rosemary and Jean Michel, but it is only open on the Journées du Patrimoine these days. Rosemary tried to get the key from the tourist office, but couldn't find anyone who could help.

Inside it is a galleried building similar to a cloister (and apparently many people mistake it for a cloister). The column capitals on the south gallery have the figures of a danse macabre carved into them, so I was disappointed not to get a look. The building was constructed between 1516 and 1520 and used as a cemetery until 1807, when it was converted into the laundry for the General Hospital. Finally in 1933 the building was handed over to the town of Blois and became a museum for medieval masonry and architectural sculpture. In particular it houses the salvaged masonry and sculpture from the houses in Blois that were destroyed at the beginning of the Second World War.

It is one of only four cemeteries of this kind remaining in France.

So for the time being our only view of the inside is this video, made by a guide from the Chateau of Blois:

Well, we'll know where to find you, N&A and Rosemary and Jean Michel next Patrimoine!!
I'll have to try the link later for the video...the Parisians are down...and this thing is like a slug with rigor-mortice!!

I didn't know about the aître Saint-Saturnin in Blois. I have seen the aître Saint-Maclou in Rouen. You mention there are two other such aîtres in France. My research was unsuccessfull, but I found this French site on Danse macabre you might be interested in.

I don't know where the other aîtres are. I got the info from the Blois Tourist office website. It says "L'aître Saint-Saturnin est un des quatre cimetières monumentaux à galerie subsistant en France." One is presumably the charnel house at Montivilliers (L'aître de Brisgaret), but I've no idea about the fourth.

Thanks for the link. I've seen this website before. Utzinger is the expert on the subject.

Thank you, Susan, for the information. I'll keep checking at mes moments perdus!

It's too bad that the aître St-Saturnin is in such sad condition (judging from looking at the video). If you get to Rouen, the aître St-Maclou is one of the many amazing sites to see in the city.

I agree. I think the museum service might be suffering from a lack of resources. It is just being used as a storage facility, the next door block of land is all surrounded by hoardings and looks like a building site. You can't even get into the aître by appointment any more, which I believe you once could.

That's what you get from procrastination isn't it? I had been intending to visit it for over a year when there was still a mobile number to ring. However, I think I know a way of maybe getting the key. I'll look into it and let you know.